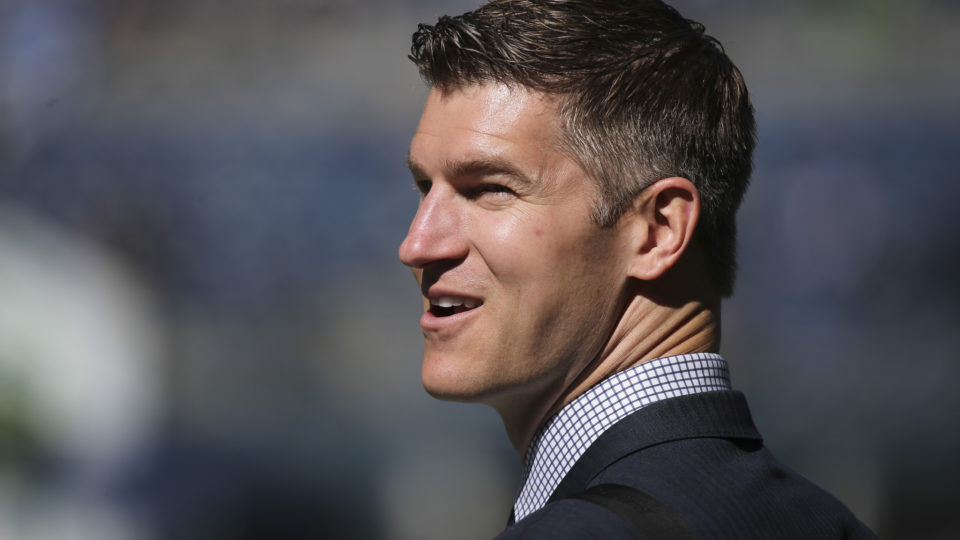 Ryan Pace is not in the business of shooting for 9-7. He is in the business of taking calculated and measured risks in an attempt to build a roster full of players that have legitimate potential of one day belonging in the top tier of their position group.

A blueprint exists for building the type of team Pace seems determined to build. Drafting players with conviction and signing free agents that project to be more valuable in the future, rather than paying players for what they have done in the past.

So far Ryan Pace has been following this blueprint. From the trades of Brandon Marshall and Martellus Bennett, letting Matt Forte walk, and drafting Kevin White, Leonard Floyd, and Jordan Howard, Pace has shown that he can both let go of the past and draft with moxie.

After last years disappointing season, Pace was sitting in a pretty good spot with the third pick in the draft (and a top four selection in every other round besides the sixth) to appease his 62 year old head coach John Fox with players that could come in and immediately contribute. In a draft many pundits deemed to be littered with defensive talent, the consensus was that the Bears would draft a top defensive prospect such as LSU’s Jamaal Adams, Alabama’s Jonathan Allen, or one of Ohio State’s two standout defensive backs. Any one of those players would be a day one starter for the blue and orange, but that isn’t the route that Pace took.

Instead, he was smart enough to understand that it’s highly unlikely that he would ever be in a better position to acquire a potential franchise quarterback, something the Bears literally haven’t had since WWII. He traded this years third and fourth rounder and next years third rounder to move up a selection and drafted Mitchell Trubisky, the former North Carolina quarterback who has more upside then any other signal caller in this years draft class.

While it’s unknown whether or not it was necessary for the Bears to give up three picks to move up, Pace was able to gain two picks back by trading back nine slots in the second round, where he selected a Division II tight end Adam Shaheen. The 6’6 275 pound pass catcher dominated the low level of competition he played against, and if you’re going to make the investment that the Bears made in Trubisky, you have to provide him with weapons. For the many fans that moaned and groaned over the pick, let’s not act like tight end prospects with basketball backgrounds don’t have an insanely good track record of NFL success (Tony Gonzalez, Jimmy Graham, or small school product Antonio Gates ring a bell?). I understand that comparing young players to future hall of famers is silly, but Shaheen should inspire more optimism in Bears fans than he currently is.

Pace finished off the draft by adding two more small school offensive players in running back Tarik Cohen and guard Jordan Morgan, while also snagging a former all american and national champion safety/return man Eddie Jackson from Alabama. While Jackson has legitimate injury concerns, if he can stay healthy he provides first round value as a fourth round pick judging by his production and tape at Alabama.

With every pick besides maybe Cohen, Pace went ceiling over floor. In his third season, many people in his position would draft as safe as possible in an attempt to get closer to .500 and show immediate “improvement.” He didn’t, and it is more apparent than ever that his goal is to climb the entire mountain, not just chip his way to the middle.

It’s not as if Pace’s style is without its risks, his first selection as Bears general manager was Kevin White, who has only played in three NFL games in his first  two seasons due to leg issues, and it’s entirely possible that he will end up regretting not resigning the 26 year old Alshon Jeffrey in free agency. Many of his better free agent signings (Jerrell Freeman, Josh Sitton, Akeim Hicks) will be free agents again after the 2018 season, and the longest free agent contract he has given out to this point was the five year deal that Pernell McPhee received in 2015, who has been an oft-injured disappointment thus far.

While he has been far from perfect, he’s also been far from boring. For an organization that has missed the playoffs for six straight seasons, drafting like he did two weeks ago puts playoff hopes on hold for at least one more season,and probably more. A drought that long is frustrating and there will assuredly be fans that will be upset with how this draft unfolded. But, the bigger picture is more important than the present screenshot.

Ryan Pace’s initial plan to bring the Bears back to relevancy in the post Emery/Trestman era hasn’t worked out, in no small part due to factors outside of his control like the roster he inherited and the poor internal management and communication structure that has been set by the McCaskey family. So he has changed course, and now his intent is to build his team, his way, from the ground up regardless of how his grouchy head coach might feel.

It’s hard to win super bowls, there’s a lot of uncertainty in the game of football but uncertainty will not stop Ryan Pace. He’s determined to bring the Lombardi trophy back to Chicago, or get fired trying. That’s a leader I can get behind.