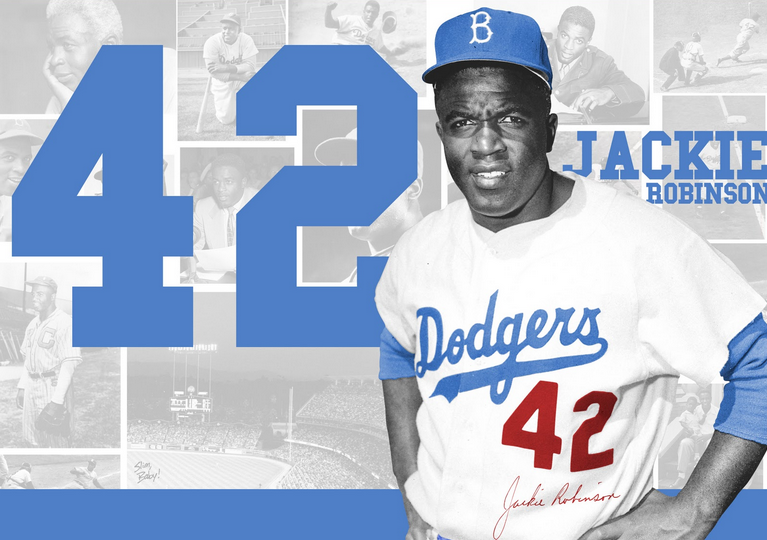 Your legacy lives on, Jackie.

In 1997, the MLB officially retired number forty-two. Since 2009, Major League Baseball has praised Jackie for his efforts, declaring April 15th Jackie Robinson Day, in which all players will wear the number forty-two in his honor.

so important in the baseball culture? Well, aside from his talents to become the first African-American player in the MLB, he also resembled a person with great character as well as an ambassador to society. In that time period, people of color were second-class citizens at best. If a particular player were to break the color barrier, the guidelines would not be based solely upon talent. A man would have to show excellent character on and off the field, because this particular person is representing the entire African-American baseball player population. A slip-up would potentially cause a bias towards African-Americans, one that already lacked positivity. Jackie was the perfect fit to represent the Negro Leagues and African-Americans everywhere. For two years. He served as a second lieutenant in the United States Army during WWII.

He thrived in four sports while at UCLA. He succeeded in the classroom. Lastly, he was a person who was not afraid to voice his opinion in a professional manner.

After his signing with the Brooklyn Dodgers organization in 1946, Robinson received scrutiny and awful racial slurs throughout his 11-year playing career in baseball. Fans, opposing teams, and even teammates were booing Robinson, calling him names, and even throwing objects towards him. Few can only imagine what he went through, especially with the experience in Philadelphia with Phillies’ manager Ben Chapman(highly recommend watching the movie, “42” to hear exactly what Chapman said) on a daily basis.  No person deserves that kind of harsh treatment. It takes a lot of will, courage, and determination to do what he did. That alone shows how much character Jackie Robinson possesses and it shows exactly why he is celebrated in the baseball world every year.

After his playing days, he continued to advocate for equal rights,

continued to promote African-American ballplayers, and continued to carry himself with an upstanding demeanor. We as baseball fans should feel honored every April 15th. People within Major League Baseball cannot express enough gratitude, and nor can I, because Jackie deserves that honor.

The color barrier was broken in the MLB in 1947. One day, I hope to see another barrier broken, the gender barrier.