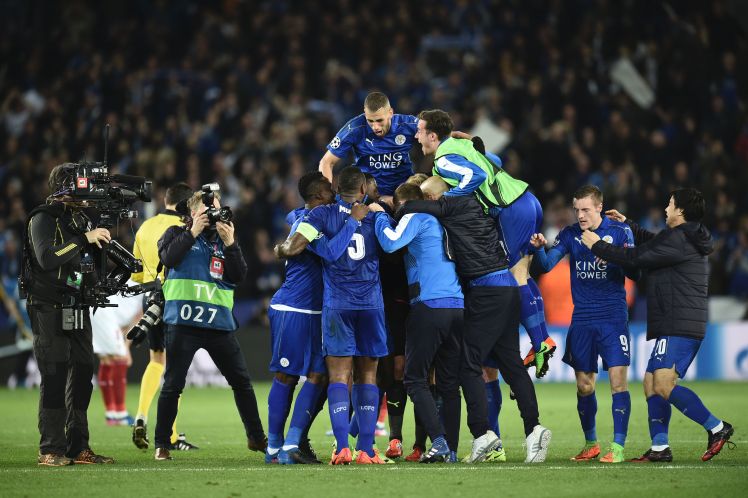 Leicester City FC made history Tuesday night as the Foxes defeated Sevilla FC 2-0 (3-2 on aggregate) to advance to the quarterfinals of the UEFA Champions League for the first time ever.

Leicester, who were hosting their first UEFA Champions League knockout-stage match in the club’s 133-years of existence, scored one in each half through captain Wes Morgan and Marc Albrighton. Sevilla missed a late penalty attempt that would have sent the match to overtime.

Samir Nasri had the first quality chance of the game in the fourth minute when he dinked the ball to himself at the near post and volleyed low into Kasper Schmeichel’s left glove, making many of the home fans wonder if Tuesday was going to be a repeat of Sevilla’s first-leg dominance.

Undaunted by the Spanish side’s early foray into their defensive third, however, the Foxes responded immediately with a lengthy spell of possession in Sevilla’s end. The Foxes—who had largely looked to smash and grab during the first leg—were bolstered by their home support in the second leg and claimed the lion’s share of possession in the first half hour.

Leicester’s midfield showed a renewed ferocity to hem in the Andalusians that has been largely absent during their domestic struggles this season. Though many would blame the loss of marathon-man N’Golo Kante, the Foxes were not lacking any energy on the night as their 12th man created a raucous, supportive atmosphere from the opening whistle.

The Foxes made their intangible advantage count when Captain Morgan turned in a cross at the back post in the 27th minute to level the aggregate score at 2-2 and put Leicester ahead on away goals. Last season’s PFA player of the year, Riyad Mahrez, delivered the assist from a free kick at the left edge of the box, where Morgan managed to wrap a leg around his defender to beat Sergio Rico between the sticks for 1-0 on the night.

It was the first goal Sevilla had allowed all season long in the Champions League.

With their slim advantage suddenly gone, Sevilla responded with urgency and began serving up crosses of their own. The home side, however, withstood the barrage and the match opened up significantly for the final 10 minutes of the first half, with both teams registering chances but neither adding to the 1-0 score line.

In the second half, Sevilla were understandably on the front foot coming out of the locker room. They injected Stevan Jovetic and Mariano off the bench but failed to connect their final passes to make their early pressure pay. The Andalusians came closest in the 53rd minute, when Wissam Ben Yedder hit the underside of the post with a dipping effort from distance, only to watch Sergio Escudero sky the follow up into Row Z.

The visitors, though, would be made to rue the miss just seconds later.

At the other end, Albrighton made it 2-0 on the night—scoring only his second of the season (both in the Champions League). He controlled a deflected cross with his chest at the top of the box in the 54th minute, put the ball on the deck, then finished low inside the left post with a calm right foot.

With a 3-2 lead, the Foxes reverted to stacking their defensive lines while relying on Jamie Vardy to spearhead any counterattacking opportunities.

Things got much worse for Sevilla when Samir Nasri was sent off with a second yellow after a coming together with Vardy in the 74th minute. Vardy received his first yellow for shoving Nasri seconds prior to the French international’s retaliation.

In the 79th minute, Sevilla received a penalty lifeline when Vitolo was sandwiched between Fuchs and Schmeichel in the box. Steven N’Zonzi, though, failed to convert the gilt-edged opportunity from the spot as his weak effort was saved low to Scheichel’s left, leaving his side still one goal shy of sending the tie into overtime.

Not long after, Sevilla manager Jorge Sampaoli added to his team’s woes by joining Nasri in the locker room in the 83rd minute after being sent off for dissent.

Though Leicester failed to capitalize on numerous counterattacking chances to kill of the game in the last 10 minutes, the Foxes managed to survive and advance to the quarterfinals alongside Barcelona, Juventus, Bayern Munich, Borussia Dortmund, and Real Madrid.