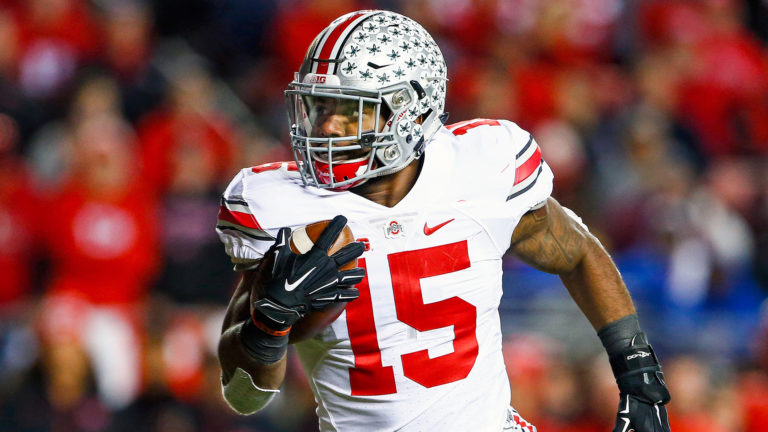 As the 2016 college football season quickly approaches, eyes begin to turn to coaches, who will soon make their decisions on who will replace the dynamic players that each team lost to graduation or the Draft. Today, we’ll look at how a few of the Big Ten’s Championship contenders – Michigan State and Ohio State from the East, Iowa and Wisconsin from the West – will overcome some of their key losses going into the 2016 season.

Starting with the 2015 Big Ten Champs, the Michigan State Spartans possibly have the biggest loss to overcome. On the offensive side, the Spartans lost three-year starter Connor Cook, who graduated this spring. In 2015, Cook completed 229 of 408 passes for 3,131 yards, 24 TD’s and only 7 interceptions. In his career at MSU, Cook threw for 9,194 yards and 71 touchdowns, breaking Kirk Cousins’ records as best in Michigan State’s history at the position. At the moment, senior Tyler O’Connor looks to be the presumptive starter at QB for 2016. O’Connor came in against Ohio State last season where he threw 7-12 for 89 yards and a TD.
Continuing in the East, Ohio State will have to overcome the loss of running back Ezekiel Elliott if they want to make a run at the B1G Championship. In the 2016 NFL Draft, Elliott went fourth overall to the Dallas Cowboys. In Zeke’s junior year in 2015, he rushed for 23 TD’s and 1,821 yards on 289 carries, averaging 6.3 yards per carry. He also averaged 7.6 yards per catch on 27 receptions for 206 yards. The presumptive starter for 2016 would be senior Bri’onte Dunn, but he’s only had 287 rushing attempts in his career under Ezekiel Elliott, and according to head coach Urban Meyer, Dunn and freshman Mike Weber are “neck and neck” to take the position in the fall.

On to the East, the Iowa Hawkeyes will look to return to the Big Ten Championship in 2016 after losing to MSU by three points last season. The Hawkeyes’ biggest loss coming off the 2015 season will be three-year starting WR Tevaun Smith, who graduated this spring. Smith finished the 2015 season with 563 yards on 32 receptions, and finished his career at Iowa with exactly 1,500 yards on 102 receptions. Iowa will look to replace Tevaun with seniors Matt VandeBerg and Riley McCarron, as well as sophomore Jerminic Smith.

Finishing in the East, the Wisconsin Badgers will look to replace WR Alex Erickson if they hope to battle through a tough season and get back to the B1G Championship Game after losing to Ohio State in 2014. Erickson finished the 2015 season with 978 yards on 77 receptions, averaging 12.7 yards per catch. He finished his career with the Badgers with 1,887 yards and six TD’s. Wisconsin will look to senior Robert Wheelwright and junior Jazz Peavy to pick up the slack in Erickson’s absence.

Only time will tell if these key losses will prevent one of the four power house Big Ten teams from returning to the conference championship. Although replacing a star player is always difficult, a truly great team will manage the transition from one skill player to the next in their pursuit of success.