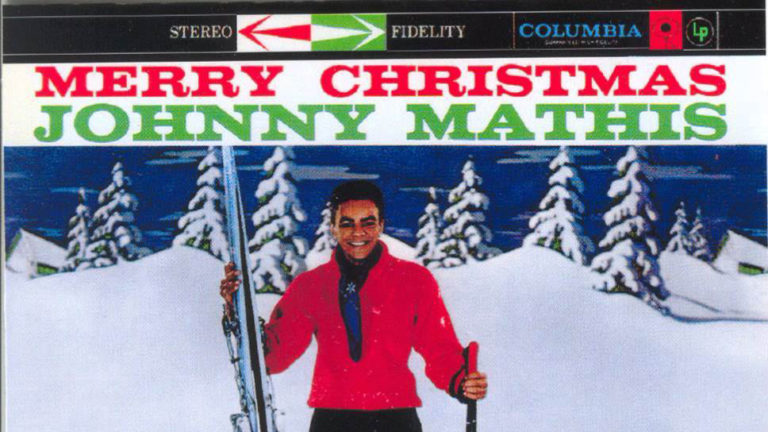 “Merry Christmas!” by Johnny Mathis was the fifth best selling album of the 1950’s. “Merry Christmas!” was released in 1958, and has an assortment of classic Christmas tunes. The album initially spent four weeks at number three on the Billboard best-selling list and is still considered one of the best-selling Christmas albums of all time, with over five million copies sold as of 2013. The album didn’t spend much time in the spotlight the first year it was first released but resurfaced near the top for subsequent holiday seasons.

I discussed another one of Mathis’ albums, “Heavenly,” a couple articles ago for Variety Show. I mention in this article that the orchestras behind Mathis’ voice are strong, but I don’t focus too much on the vocals themselves. I do remember that his voice had a way of complexifying the lyrics he was singing, even if the song had been sung a million times before (and most of them had been). He is by far not my favorite jazz singer, but he is definitely something special.

Based on the sound of the rest of the albums I’ve discussed from the 1950’s, I’m not expecting anything to be unique. I’m assuming that this Christmas album is going to blend pretty well with the rest of the songs repeated on the radio for the duration of December. I’m also expecting to enjoy them more now than I would around the holidays since I haven’t heard all of the classics for a couple months.

At the same time, I am really, really hoping for original Christmas music. Not only for the sake of an interesting article but because I think that brand new Christmas songs can be refreshing. Every time I see a new Christmas album, I hope that there is something original on it, or at the very least, a fresh perspective on a classic.

When I began listening to “Winter Wonderland,” the first track on the album, I couldn’t help but immediately think “Wow, I really could do without hearing this right now! I’m not a huge fan of this at all!”

Then I got just over a minute into the song and fell in love with it because there was something added to this classic Christmas jam that I had never heard before. Mathis adds a verse to “Winter Wonderland” that makes it much more romantic and precious than it already was. I already see his voice making the lyrics deeper like I did in my last review.

By the second track, “Chestnuts Roasting On An Open Fire,” it’s undeniable that I’ve been thrust into the most full-blown Christmas spirit possibly ever! I’m two months too late, but that keeps me consistent with how behind I am this semester, so I suppose it isn’t terribly inconvenient.

“Blue Christmas,” as always, has my heart soaring because what a banger. The orchestral/musical arrangements for this song are always stunning, in every single recording I’ve ever heard of it (Michael Bublé’s, The Beach Boys’, Dean Martin’s especially, and of course Elvis Presley’s).

Next come an assortment of songs that feature Percy Faith & His Orchestra, including “I’ll Be Home for Christmas,” “White Christmas,” “O Holy Night,” “What Child is This?” and “Silent Night, Holy Night.” This musical addition is amazing and does a great job of making these songs more enjoyable to me because of the full string orchestra.

“O Holy Night” is my second favorite Christmas song ever behind only “Hallejullah”. I wouldn’t say that this is the best recording of the song I’ve ever heard, but I do think that it’s alright. It isn’t anything particularly spectacular, but I’m not angry at it since it’s still one of my favorites.

If I’m being honest, “What Child is This?” sounds extremely creepy. Mathis sometimes uses a subtle vibrato in his voice, especially when he’s singing more quietly. In this song, he’s singing just softly enough in the first verse to make me super uncomfortable! Perhaps if he weren’t singing about an infant I would be less unsettled. However, the last twenty seconds are absolute bliss because wow can Mathis belt those notes into the heavens.

The last song on the album, “Silent Night, Holy Night” has some fantastic harmonies in the background vocals from beginning to end. There is something to be said about a voice that works with a chorus behind it, instead of drowning it out. This just reinforces my thought that Mathis’ best vocal attribute is adding meaning and significance to the things around it, such as the orchestra and other vocals.

This album does stick out from the others I have listened to from this decade, but only because Christmas music could easily be considered its own realm, separate from any other genre. There’s a specific mood and feeling that Christmas music is meant to evoke, a feeling of happiness that the holiday season can create in people. This album reaches that goal for me. While I would’ve liked to see more originality in these songs like you can see in “Winter Wonderland,” I’m still happy because of how timeless the album is.

Finally, even though this album literally couldn’t be any more irrelevant because it’s mid-February, I’m in the Christmas spirit again. Kudos to Johnny!

Listen to “Merry Christmas!” by Johnny Mathis here or below!

Variety Show is a bi-weekly column in the midst of analyzing the best-selling albums from the 1950’s to the 1990’s. One of the top 10-20 albums from each decade will be reviewed, discussed and/or analyzed each week in chronological order. The column aims to draw cultural, musical, and other contextual connections between artists and albums over time, as well as go on a broad but refined journey. Next week we’ll be talking about The Oklahoma! Motion Picture Soundtrack, the fourth best-selling album from the 1950’s.