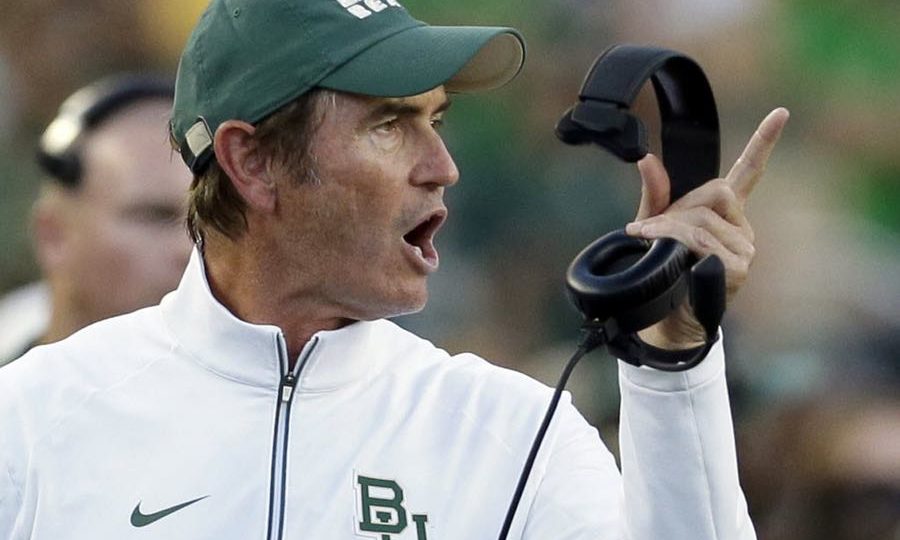 The image of Baylor University and specifically their football program has been nothing short of ugly over the course of the past two years.

Allegations of drug abuse, academic cheating and sexual assault has ravaged Baylor university and they wholeheartedly deserve the “Death Penalty” sanction from the NCAA. Here’s why.

Not only were multiple players accused of these allegations allowed to continue to play football but some barely received a slap on the wrist.

The Baylor University Board Of Regents released an official statement titled “Findings Of Fact” that did not include any scrap of evidence of incriminating text messages from Art Briles, Ian McCaw or Colin Shillinglaw who are now all former employees of Baylor University.

A Baylor football player who was receiving a massage on  when he engaged in inappropriate behavior with the masseuse. Assistant Colin Shillinglaw texted Briles on September 13, 2013 : “supposedly exposed himself and asked for favors. She [masseuse][ed. Note] has a lawyer but wants us to handle with discipline and counseling.” Briles responded “What kind of discipline…She a stripper?”

The lack of seriousness displayed in Briles’ response regarding the situation is not only alarming but disgusting in itself. This incident is just the beginning of the pile of hot garbage Briles help build during his tenure at Baylor.

A Baylor football player was put under arrest for attacking another student along with threatening to kill them. Following that incident on September 20th, 2013 an unnamed official a part of Baylor’s football operations staff went forth and attempted to convince the victim not to press criminal charges. While that was going on Briles was in talks with the Baylor Athletics Director, Ian McCaw, sending him a text saying “Just talked to [ed. Note][the player] he said Waco PD was there – said they were going to keep it quiet – Wasn’t a set up deal…I’’’ get shill [Ed. note][Shillinglaw] to ck on Sibley. [ed. note][attorney Michael Lamonsoff]”

Then-Baylor AD Ian McCaw responded “That would be great if they kept it quiet!”

How much more blatant can you be when it comes to covering something up?

An unnamed player had to meet with the Vice President of student life at Baylor, Kevin Jackson, in October of 2013 because he was suspended for multiple drug infractions. When discussing how to defuse the situation Shillinglaw texted Briles “Bottomline, he has to meet with Jackson tomorrow morning. If Jackson does not reinstate President will.”

Let’s fast forward a couple years. It only gets worse.

One of Briles players was put under arrest for possession of marijuana in August of 2015, after that incident Briles shot a text to an assistant coach saying “Shit – how about that – he’s gonna b in the system now – let me know what you think we should do…I can get shill [ed. note][Shillinglaw] to call Sibley or we can…Do we know who complained?”

After Briles found out that the complaint came from a superintendent of that player’s housing complex he texted back “We need to know who supervisor is and get him to alert us first.”

Talk about handling things in-house. When I say in-house you would think I mean specifically within the Baylor football program and the athletic department. This type of heinous behavior is too tame for the Baylor Bears though, nope this goes all the way to the top.

Baylor player, Tevin Elliot, was guilty of plagiarism which happened to be his second violation of the school’s honor code. Instead of striking out and being released from the team Briles implored former Baylor president, Ken Starr, to terminate Elliots suspension completely. Not only was that successful but Starr decided to not let judicial affairs handle this situation and placed Elliot under “probationary watch” of the school’s athletic department.

Trouble did not stop for Elliot there as he was later accused of sexual assault on April 15th. Per usual Briles took his now normal route of complete ignorance and did not report this incident to judicial affairs until the Waco Tribune-Herald came out with news regarding the police investigation.

Elliot was later found guilty of two acts of sexual assault and sent to prison on the maximum of 20 years.

According to Baylor Officials, multiple Baylor football players engaged in both physical and sexual assaults of 17 women that begun in 2011 while Briles was the team’s head coach.

Multiple people within the Baylor Athletic Department, the football program and the administration itself handled these incidents in an unbelievably scandalous manner that negatively affected numerous victims over the course of four years. Ian McCaw, Ken Starr, Art Briles and Colin Shillinglaw have all either been terminated or have resigned from employment at Baylor University.

The NCAA “Death Penalty” has come down on eight different programs in history and if the NCAA conducts their investigation regarding Baylor thoroughly they wholeheartedly deserve the “Death Penalty” sanction.
Seeing that Baylor promotes themselves as a religious based school and are a private baptist university it is truly incredible that they have not self-imposed this ban on themselves already due to the morals as well as values they claim to stand by.

In case of recovering damages from a wrongful death claim then you can contact experienced Wrongful death lawyer in Miami for legal advice.