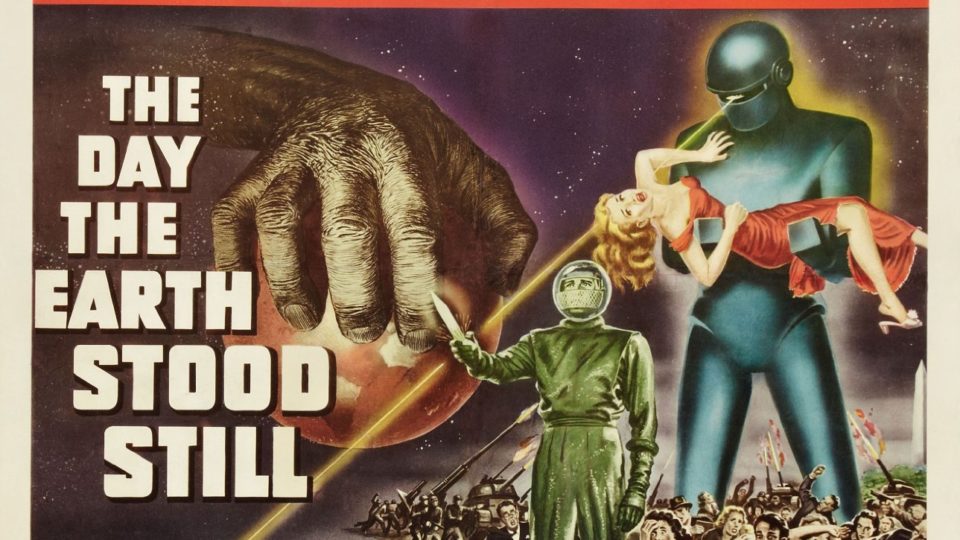 The Day the Earth Stood Still is a science fiction film from 1951 based on the story by Harry Bates about the first alien coming down to Earth with a startling message for her people. It looks at the concept of a First Contact through the eyes of the average person rather than government figureheads.

The story is fairly basic and gets rolling right when the opening credits end, which is a blessing compared to movies that meander to introduce themselves before getting their plots going. A flying saucer UFO has landed in Washington D.C. and the United States scrambles to figure out what to do about it as the military secures the landing site. That is until the alien inside it emerges, a human looking alien named Klaatu. And when they take Klaatu in for questioning, a fearsome robot emerges from the ship and demonstrates its power by melting all weapons of the surrounding soldiers.

Klaatu escapes and wanders around Washington until he befriends a single mother named Helen and her boy named Bobby. From there Klaatu must figure out how to broadcast his warning message to the world for the safety of both mankind and the universe surrounding them.

The film is simple and easy to follow, at the expense of thematic depth. But that is not to say it’s paper thin. The Day the Earth Stood Still is very much a Cold War film. It’s a preacher on the pulpit condemning the tensions between the United States and Soviet Union and the chaos their long feud created. In 2017 a message like that is practically taken for granted but for the time period is very poignant.

While thematically the film has at least some depth, the same cannot be said for the characters. There is only one real character arc, and that’s Helen’s. Klaatu remains the same stoical wise man from space through the whole movie, the government authority figures are the same through most of the film until the very end with the final speech, and the movie just drops Bobby halfway through the film and his character goes nowhere.

On the bright side, the acting in this film is not nearly as jarring as schlocky early sci-fi films can get. Michael Rennie is charming and charismatic as Klaatu, Patricia Neal is a believable woman of the 50’s, and Billy Gray is more than a little cheesy as the stereotypical 50’s boy though he did not really detract from the scenes he was in.

And because this is low hanging fruit, the visual effects are worth mentioning last. The flying saucer UFO looks like a pie tin with a dent in the bottom. The robot is obviously a man in a helmet and spray painted silver suit. By today’s standards these visuals are not only bad, they’re nearly laughable. But in 1951, these visuals were state of the art. In fact, it’s the first film to feature a flying saucer and fantasized robot. In context of the time period the effects are nothing short of commendable. And today they aren’t even awkward or annoying, but rather charming and almost quirky.

So yes, The Day the Earth Stood Still is more than a little dated. While the message is good and delivered well, it’s a message you’ve heard before in more ways than you could shake a stick at. But for science fiction fans and film buffs, there is more than a little value to be had by giving it at least one viewing. For everyone else, it’s probably best viewed as clips on YouTube to have a chuckle at the outdated visual effects.

For more classic science fiction, check out War of the Worlds and Forbidden Planet