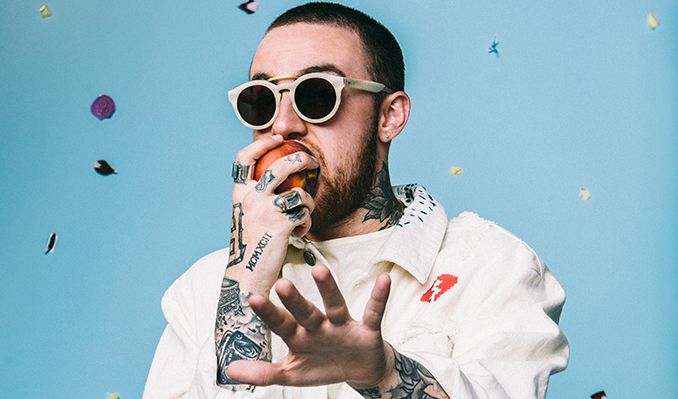 There’s technically no sole inventor of true middle-school angst, but Conor Oberst is an acclaimed king of feel-sad, middle-school self-pity. He’s had a musical career as Bright Eyes since 1995, releasing “The First Day of My Life” in 2006. However, still standing as one of his only “cheerful” songs, “First Day” is endearingly written to a new romantic partner.

“I think I was blind before I met you … This is the first day of my life / I’m glad I didn’t die before I met you / But now I don’t care, I could go anywhere with you / And I’d probably be happy”.

Oberst’s trademark voice of existential shakiness might not quite get you to therapy—but it’s honest. “First Day of My Life” without any usual politics leaves it mushy with honesty. It effortlessly tugs at heartstrings, and tugs hard.

Malcolm “Mac Miller” McCormick is a lofty and boisterous American rapper—confidently in contrast to Conor’s dark, Midwestern grounded-ness. His latest 2016 release, The Divine Feminine, puts him right up along artists like Tyler, The Creator and Earl Sweatshirt. So Miller’s hip-hop production—laced with loyal themes of a dude’s rowdy night out—appears out of touch with anything “indie songwriter” by a landslide.

That said: Slightly stoned-sounding, Miller’s “First Day of My Life” coming from the same artist of Dang! and My Favorite Part demonstrates some wholehearted versatility that many musicians so carefully craft. Shredding all traces of “gangster” was not for naught, even with the amount of vocal layering.

Miller’s version has less arpeggio in its chords, instead lending a more steady, straightforward sound with more predictable syncopation. It’s a pleasantly modest cover, sticking to the status quo of the original. An air of charming confidence hints at Miller’s jazzy roots, especially with “I’d rather be working for a paycheck / Than waiting to win the lot-te-ry”.

…”I didn’t die before I met you” is definitive in comparison. Oberst wins in sincerity, but perhaps Miller does in expressing it.

The faster tempo with generally smoother guitar boasts Mac’s softer side, without glorifying love at first sight. He adds years of modern romantics to a sometimes-dingy track that can really head both ways.

A slowing solo finishes with a twangy, sundrenched feel, while leaving out Oberst’s footnotes of “Besides, maybe this time is different / I mean, I really think you like me.”  If anyone could make Bright Eyes so slick and stylish, it’s probably Mac Miller. Oberst’s original has irreplaceable soul, but Miller again proves his dedication by covering “Lua” from the same album.

Whether or not there’s something in Bright Eyes for all of us, Oberst’s writing and Miller’s wits make a strangely satisfying love song as “First Day of My Life”—on polar ends of the spectrum.