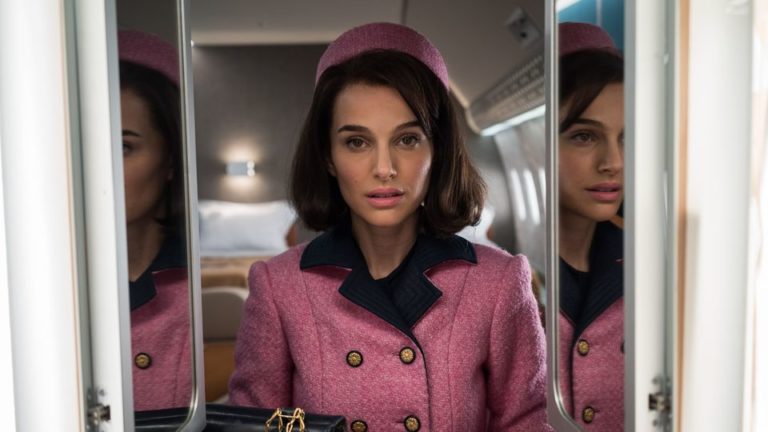 Movies have a powerful ability to emphasize parts of the world that may not get the most attention. Following this directive, Jackie takes one of the most infamous events in American history and puts a spotlight on an often overlooked figure in the story. Jackie Kennedy was famous for her youth, looks, breathy accent, and seemingly inherent put-togetherness.

Director Pablo Larrain‘s film shows a far more vulnerable humanity that was never seen in the First Lady during her numerous historic television appearances. Natalie Portman, the vehicle through which we experience this contemporary version of Jackie Kennedy, gives a performance that proves to one-up her gonzo effort in Black Swan.

Jackie begins one week after the assassination of President John F. Kennedy. Jackie Kennedy is giving an interview to a reporter, albeit what she ensures will be a carefully edited one so as to protect both her and her late husband’s public image. The movie switches back and forth between the tense discussion between the two and the events of the tragedy as they relate to Jackie herself.

The film pays due diligence in terms of American iconography; shots include a surprisingly kinetic view of the assassination, little John John during the funeral procession, and of course Jackie’s pink suit. The only difference is we see these in a far more personal light.

We see Kennedy’s injury in grisly detail, we witness the conversation where the children learn about where their father is, the suit is scored with blood marks. Larrain knows the strength of his film lies in showing these recognizable images and casting the stark light of Jackie’s reality over them.

Natalie Portman portrays her character’s struggle with believable agony while the actions she takes to ensure her husband’s legacy elevate the character to near-mythic proportions. We are shown that the First Lady was far more complex than the restrained elegance she was often limited to in her public interactions.

While attempting to ensure her husband will be remembered for more than just being killed, we see Jackie struggle with what even constitutes a legacy. In a moment of bitterness she asks strangers if the names Garfield or McKinley mean anything, referencing previous presidents who were assassinated.

Jackie finds her own legacy in searching for her husband’s. The movie goes to great lengths to ensure our understanding that her efforts to elevate the White House in terms of cultural relevance and style were more than just mere vanity projects.

The film occasionally gets heavy-handed in its delivery with select moments that seem to preach directly at the audience. Those segments do not detract from Portman though, as she is the vehicle through which we experience this affecting struggle for remembrance. While the role certainly delivers some showy moments, Portman shines in the less flashy sections; her portrayal tops mere imitation and seeks to create a wholly new character that had not been discovered until now. The late John Hurt also makes an appearance as a priest close to the family, and it is in their discussions we see Jackie wrestle with many of the the opaque conflicts crashing through her mind.

The film is worth it simply for Portman, who has a legitimate shot at a second Oscar. Its import in strengthened further given that it follows the trend of recent movies that provide insight into lesser seen or understood facets of well-known stories. This is especially important in an America that is finally giving credence to many points of view that were previously ignored, misunderstood, or forgotten entirely.

In Iowa City, Jackie is playing only at Film Scene.