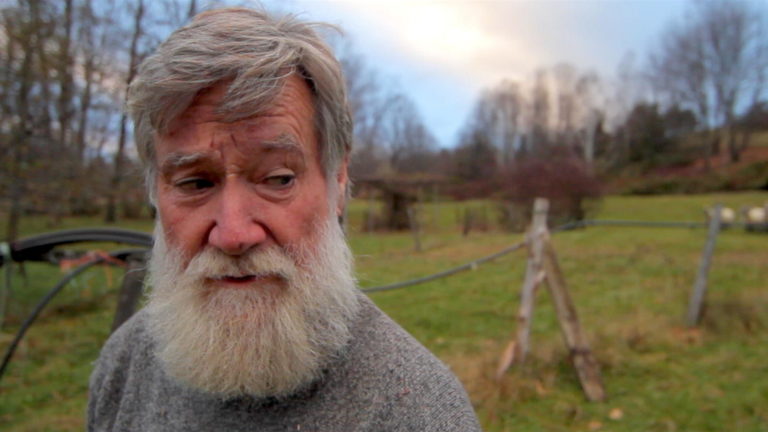 I recently found myself surfing the web with the hope of uncovering some new independent films that would be coming out soon. I ended up on IndieWire, and read a review on one new film in particular that caught my attention. I then realized it was playing at FilmScene that following weekend and became quite adamant about attending the Saturday night showing of it, which I did end up attending.

But if you’re anything like me, you might want to know a little bit more about the film before you actually go and see it, and with director and co-producer Tony Stone’s latest feature-length, I’d say it’s definitely a good idea to know what you’re getting yourself into, especially for all my vegan and vegetarian friends out there.

Peter and the Farm opens with a camera on the dashboard of a car, looking out into the idyllic countryside of Vermont. We then are introduced to the protagonist, a rough-talking, sixty-eight-year-old, rugged individualist and the man who has been behind Mile Hill Farm for 38 years, Peter Dunning.

By all accounts, Peter seems like your average farmer just doing his thing. In an early scene, he demonstrates how he calls for his sheep compared to how he calls for his cows. He wears the same ratty wool sweater, grass stained denim, and worker boots every day. He chops wood, rides around on his tractor, and brews his own beer in his basement.

He seems to have grown accustomed to the daily chores of running a small, organic farm, so much so that in another early scene, he is visibly unfazed as he shoots one of his sheep, fails to actually kill it, shoots it again, this time killing it, and then proceeds to–in an extremely graphic matter that I actually had to cover my eyes from because it was a little too much–dismember the sheep; head, intestines, and all.

Nothing is left up to the imagination here, and Peter’s nonchalant commentary while, for example, pulling the stomach out of the sheep caracas, appears to become this early symbol for his apparent disconnect from the rest of the world, including with his now-estranged family.

Something I appreciated about Peter and the Farm is the way it addresses Peter’s back story. You never get the whole story at once, rather in pieces as it naturally comes to the surface. And it comes to the surface often, as it’s evident that Peter’s past directly impacts his present more than it probably should.

A byproduct of the 1960s counterculture, Peter was once an aspiring artist, who, pretty immediately after receiving his BA in sculpture seeks out work on a saw mill, only to severely injure and disfigure his hand to the point where he can no longer make art the way he once could. He and his first wife, enamored by the notion of organic farming, create a once prosperous business that Peter acknowledges has only been declining since the late 1990s, coinciding with the deterioration of his second marriage and the eventual abandonment by not only both of his wives, but by his four children as well. This leaves Peter where he is today– living alone on and independently tending to his 187 acres of picturesque, New England farmland.

Peter doesn’t specifically point out what was the exact breaking point for his family, but it’s safe for the audience to assume excessive drinking and his lack of exhibited emotion was probably at the root of it. The thing is that despite the unflattering way Peter, more or less, paints himself as, I didn’t really buy that he is just some stoic, apathetic jerk– and that didn’t seem to be what Stone wanted you to take away from it either.

Voiceovers throughout the film divulge incredible poetry written by Peter, elaborating on the guilt he feels for his actions, and at one point, while tossing hay down from the hayloft, and after acknowledging his discontentment over his own childhood, delivers a remarkable insight, stating, “I wish the affection for people had been received as I didn’t give it, but meant it.” That statement has been stuck in my head since I saw the film, and I think it’s because of how relatable it is, not to mention how eloquently it was put. I’d totally be lying if I said I had never felt that same exact way regarding my closest relationships–although I can’t imagine it would’ve been that nicely articulated had I verbally expressed it.

What I think is so special about Peter and the Farm is not only it’s breathtaking cinematography, but also the fact that even in the darkest moments of the film–like when sadly but not too surprisingly Peter semi-jokes that his farmhand has to hide his rifle because he speaks of suicide so often– the viewer feels, in one way or another, compassion for Peter. And this is not to be confused with pity– it’s actually nowhere near pity, and I think it’s because Peter never seems to pity himself. He carries on with his daily routine, his chores, and he never once blames anyone for what has happened, but rather, accepts it as an unfortunate aspect of his life. And in some way, Mile Hill Farm with its mesmerizing beauty and at the same time, isolated existence, seems to mirror Peter’s own existence– what was once full of plentiful opportunity and aspiration has now been eclipsed by years of adversity that I think, only someone of Peter’s age would be able to fully recognize.

Despite this bleak assertion and the fact that Stone’s documentary never really depicts Peter reaching a point of self-redemption at the end, I still wasn’t convinced that the overarching theme of the movie was to point out how much life can suck and simply leave it at that. I mean, hey, even Peter recalls that “…there have been good times. Lots of good times…” and much later on in the film declares, “Life announces itself in force– death slinks off,” suggesting, in my opinion, a more balanced conception of the reality in which we live.

At length, Peter and the Farm is a beautifully observed character study and a one of a kind film that highlights the tragedy of our past seeping into our present, what it means to be human and make mistakes, and at the very least, will definitely put some things into perspective for the viewer.