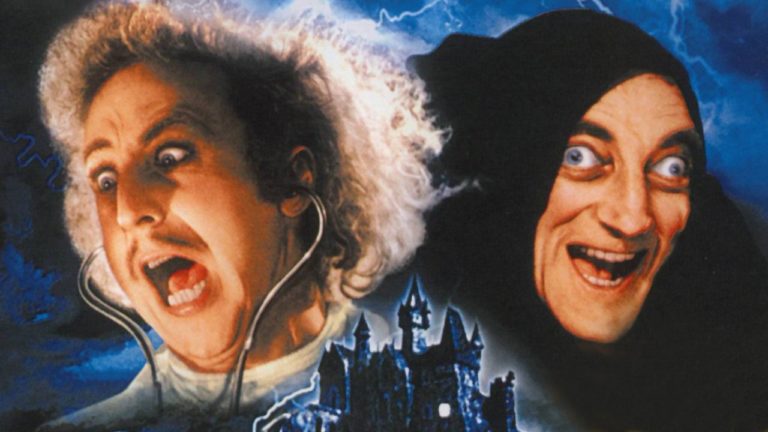 From acclaimed filmmaker and comedic talent Mel Brooks comes Young Frankenstein, a classic film spoof on the Frankenstein horror flicks from the 1930s. It brings together a remarkably talented cast and a wonderfully executed vision to present one of the finest comedies ever made.

For folks unfamiliar with the story, the plot centers around Frederick Frankenstein, grandson of the infamous mad scientist, trying to escape his legacy by being a professor. However, he is called to his inherited castle, and inevitably begins his grandfather’s work again with the help of his assistants Igor and Inga. And once Frederick finally creates his monster, the story takes many unexpected twists and turns and keeps the audience guessing.

The cast is nothing short of stellar in this film. Gene Wilder plays the erudite, manic Frederick and he bounces between a man of dignity and grace to an utter lunatic as he slowly comes to embrace his legacy and destiny as a mad scientist. His madness is always entertaining on the screen.

Marty Feldman plays Igor, the strange, hunchbacked, googly eyed lab assistant. While his humor is more silly and of the wink-to-the-camera variety, he is the perfect companion to Wilder and delivers some of the funniest moments of the film.

Teri Garr plays Inga, the straight-woman to Wilder and Feldman’s lunacy. Her taking in of the absolute nonsense happening around her is just as important to the driving comedy of the film as Wilder and Feldman.

The supporting cast is superb as well with Cloris Leachman as the bizarre groundskeeper, Madeline Kahn hilariously sultry as ever as Frederick’s fiance Elizabeth, and Kenneth Mars as the wooden armed local police inspector. Each character brightens the comedy in their own way with no real weakness or dent in the armor.

This film was wonderfully written by Brooks and Wilder, with sharp dialogue and something funny in every corner. Every viewing of the movie gives you something new to notice and enjoy. The film does not beat the viewer over the head with ham-fisted jokes or pop culture references and ultimately treats the viewer with respect.

Young Frankenstein even captures the look of the monster movies of old, with the conscious decision to present the film in black and white with the gothic sets and a booming, sinister musical score that would be eerie and unsettling if they were not in the background of such a lighthearted comedy.

For over forty years, Young Frankenstein remains an absolute must watch for fans of Mel Brooks films, Gene Wilder’s works of acting, or even entertaining films in general. It’s still very accessible to a more recent audience, and is more satisfying than a good deal of recent comedy flicks. Young Frankenstein is worth everyone’s time and I cannot recommend it highly enough.

So when all is said and done, why not let the movie speak for itself?

To pick up Young Frankenstein and give it a watch, check out your parents’ trunk of old movies, or perhaps Amazon.

For more of Mel Brooks and Gene Wilder working together, check out The Producers and Blazing Saddles.