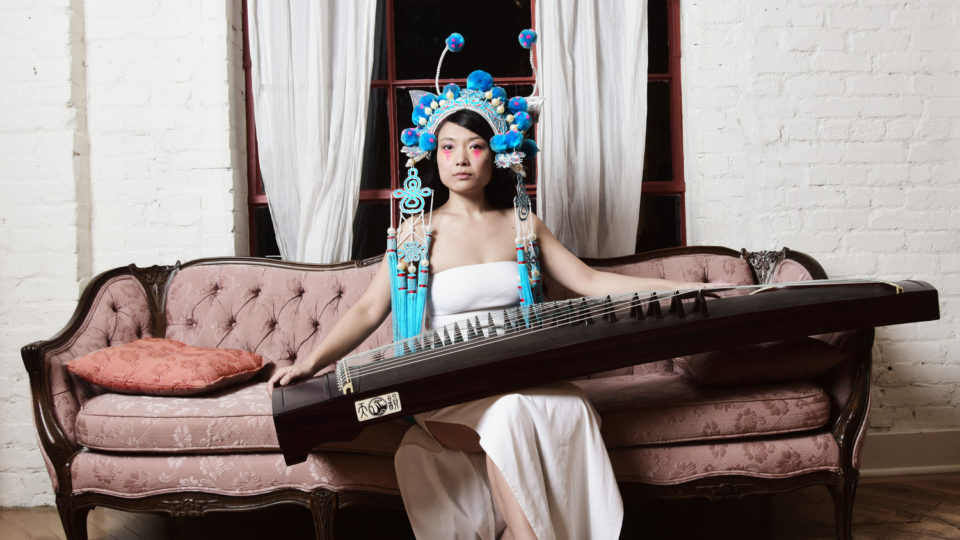 吴非 Wu Fei is a musician who composes, sings, and plays the guzheng and piano. Known for her contemporary playing of a traditional Chinese instrument, the guzheng, Wu Fei is both critically acclaimed and commonly known across the world. She makes an excellent addition to Witching Hour’s lineup.

Her primary instrument, the guzheng, was created over 2,000 years ago and has remained at the forefront of Chinese music tradition. It has 21 strings and ranges four octaves.

Before Wu Fei took the stage, the announcer from Witching Hour repeatedly mispronounced her name as he introduced her. And it’s not even hard to pronounce correctly….

But when Wu Fei came on she brought a refreshingly upbeat energy with her. She told the audience about her musical training at the China Conservatory of Music and post-graduate work in the United States. She also introduced her instrument and some of it’s long history. Then she played a classic guzheng song from Shandong, China called Yu Zhou Chang Wan.

Then she played a song called Summer Palace and explained her inspiration for the song; as a young girl she would often go to the famous Summer Palace in Beijing in the winter and ride her bike across the expansive but frozen lake. The song was very soft and nostalgic, with vocals that floated above the deep sounds of the guzheng.

Throughout the show she would share intimate details of her inspiration, longing for home, and reflections on music she has made at different points in her life.

After playing some beautiful contemporary pieces, Fei spoke of her experience moving back to Beijing after living for some years in the States. She said she felt reverse culture shock and a sense of distance from her home town and culture. At this point, she said, she clung to traditional Chinese music and felt a renewed appreciation for it. After sharing this, she played more traditional songs.

For her last song, Fei stood up and sang a Hunan opera song. She gave a background of the piece, explaining the story of Mulan, the woman who took her sick father’s place in the army draft. In the song, Mulan is explaining to her sexist military officers that women are as strong as men.

Overall, Wu Fei’s performance at Witching Hour was amazing. It’s important for all types of music to be represented at a festival that prides itself on “exploring the unknown, creative process, and new things.” But in the spirit of this mission, Witching Hour representatives should definitely make sure they know how to pronounce the artist’s name. Although Wu Fei gave an incredible performance, her artistry should not be treated as an exotic gem for a festival lineup. One of the most fundamental ways to ensure that her art is genuinely appreciated and not objectified is in the little details like correct pronunciation of a non-English name.

Check out the rest of Witching Hour’s lineup!