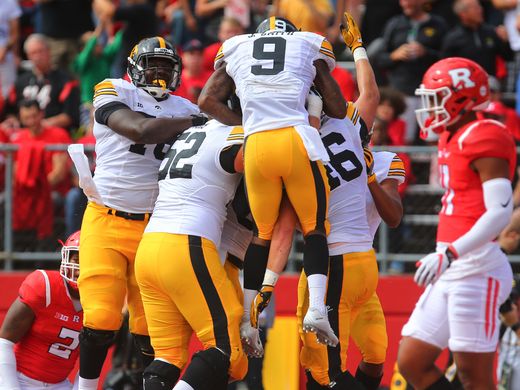 Piscataway, N.J. – If you watched the game, or looked at a stat sheet, you’ll realize Iowa’s 14-7 victory over the Rutgers Scarlet Knights wasn’t pretty. But, a win is a win and Iowa moves to 3-1 (1-0) overall after picking up their first conference win of the Big Ten season in the Hawkeye’s first ever visit to Highpoint Solutions stadium.

“We know the kind of potential that we have as a team,” senior cornerback Desmond King said. “We know we’re a better team than what we are right now.”

In a game that went scoreless through most of the first half, special teams play was pivotal and give credit where credit is due: punter Ron Coluzzi had a heck of a game. The graduate transfer from Central Michigan punted seven times and landed four inside the Scarlet Knights twenty yard-line.

“To impact the game that kind of way was awesome,” Jewell said.

From their own one yard-line with just over two minutes until halftime, Hawkeye senior quarterback C.J. Beathard rolled out and scampered up field for thirteen yards and got out-of-bounds. With three timeouts remaining, it was then when Iowa decided to try and put some points on the board before half. And, they did just that. After moving the ball to the Rutgers 36-yard line, Beathard found Hawkeye senior tight end George Kittle for the quarterback’s eighth touchdown pass of the season.

“The best thing our football team did today was the fight they showed at the end of both half’s, “Iowa head football coach Kirk Ferentz said. “I thought that was the highlight for us.”

The start of the second half was very similar to the first half. Both teams stalling offensively and battling for field position.

You knew something had to give. And something did. With 8:42 remaining in the game, Iowa defensive back Brandon Snyder forced an Andre Patton fumble and the Hawkeyes recovered at the Rutgers 26 yard-line.

“We needed a spark. It just felt like all day we were just average and we just needed something to happen – whether it was a pick or a fumble,” Snyder said. “We went into that drive thinking that we need a takeaway and we ended up getting it.”

Although they gave up nearly 200 rushing yards on the day, the Iowa defense made the plays when it had too, including a fourth down stop with 4:40 remaining, which allowed the Iowa offense to put the game away.

Iowa returns to Kinnick Stadium this Saturday for it’s homecoming matchup with the Northwestern Wildcats.