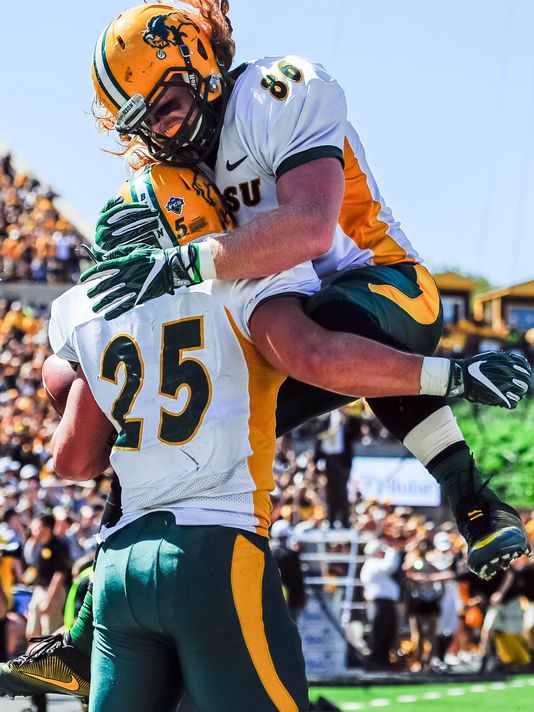 Note: This article was submitted to KRUI and written by Troy Weiman

The Bison, ranked #1 in the FCS, proved to be a respectable opponent for the FBS #13 Hawkeyes after the teams went back and forth throughout the duration of the game. NDSU improves to 3-0 on the season and they have extended their winning streak against FBS opponents to seven games.

The Bison got the scoring started late in the first quarter when C.J. Beathard was hit as he threw by an NDSU defender. The ball was picked off by Bison LB MJ Stumpf and returned 21 yards for a touchdown to put NDSU up early.

Iowa’s offense responded in the second quarter as Beathard threw two touchdown passes, one to Riley McCarron and one to Matt VandeBerg to take a one-score lead into the locker room.

The teams traded scores in the third quarter, the Bison scoring on a King Frazier 1-yard touchdown run and the Hawkeyes on another Matt VandeBerg touchdown grab on a pass that was actually intended for TE George Kittle.

North Dakota State had a chance to tie or take the lead with 3:41 remaining in the ballgame after a Chase Morlock touchdown reception made the score 21-20 in favor of the Hawkeyes. NDSU elected to go for two, and after QB Easton Stick was flushed from the pocket, his pass was knocked away as the Iowa defense came up with the stop.

Iowa was forced to go three-and-out after the kickoff. Iowa rushed the ball twice for no gain and Beathard was sacked for a loss of 10 yards. The Bison ran 5 plays in the last 1:53 of game time before Cam Pedersen kicked the game-winning37-yard field goal as time expired.

The loss was Iowa’s first ever to an FCS school after being 13-0 entering the game. It was speculated that the Hawkeyes may have taken the 5-time defending FCS champions for granted leading up to the match up, but the players insist that was not the case.

“Not at all,” said linebacker Ben Niemenn when asked if the team underestimated the Bison. “We had a lot of respect for them going into the game. They’ve been able to beat a lot of good teams at this level.”

The run game appeared to be the difference on the day from both sides of the field. The Bison rushed for 239 yards on the day with three different players tallying 60 or more yards on the ground. King Frazier led the way with 99 yards. On the other side, the Hawkeye running backs were held in check as the Bison only allowed 34 total yards on the ground, 29 of which came courtesy of LeShun Daniels, Jr.

“We thought we’d be able to run the ball a little bit better,” said Beathard after the game. “It just wasn’t working today.”

Despite the tough loss in a game the Hawks felt they should have held onto, Beathard says the team is not going to let it get them down.

Head Coach Kirk Ferentz also noted that the Hawkeys have to have a short memory as they move on going into next week.

“The only value for us is if we learn, and we’ve got to grow,” said Ferentz. “The big thing is how we respond and what kind of improvements we can make on a daily basis and weekly basis.”

The Hawkeyes will not have much time to think about this loss with conference play starting up next weekend.

“We’ll get back to work tomorrow and see what we can do about moving forward,” said Ferentz.