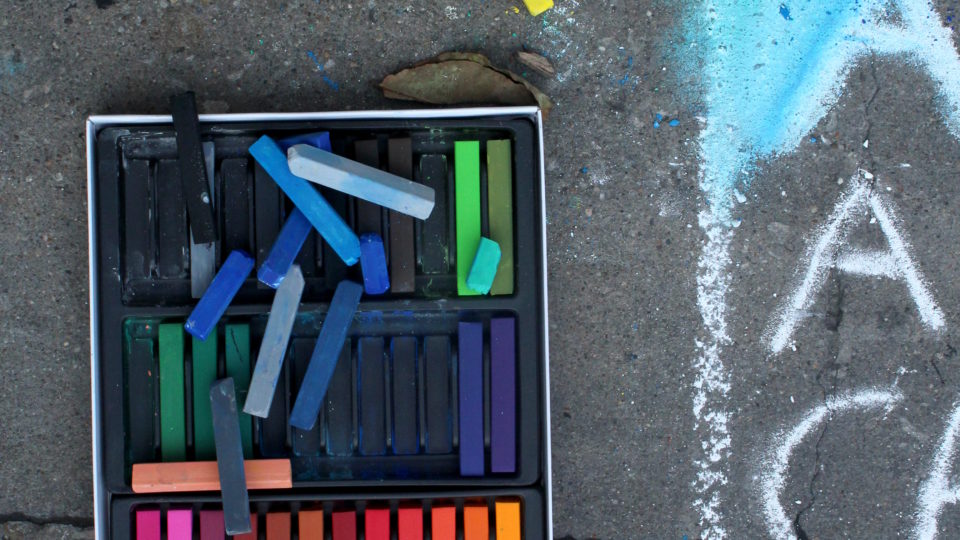 Menacing clouds did not deter artists and festival-goers a few weeks ago at Iowa City’s first chalk-art festival. Colorful pieces of work were displayed across South Clinton Street, exhibited proudly on the pavement that had been pounded by thunderstorms. Due to the storms the night before, many artists had cancelled their reservations for space, and Midwest One Bank opened up chalking spaces for the public.

Families strolled Clinton casually, and groups of friends pointed to various pieces of work as children observed beneath layers of face paint. A stage with various performers helped add to the atmosphere, some people sitting down or standing aside to take in the music. 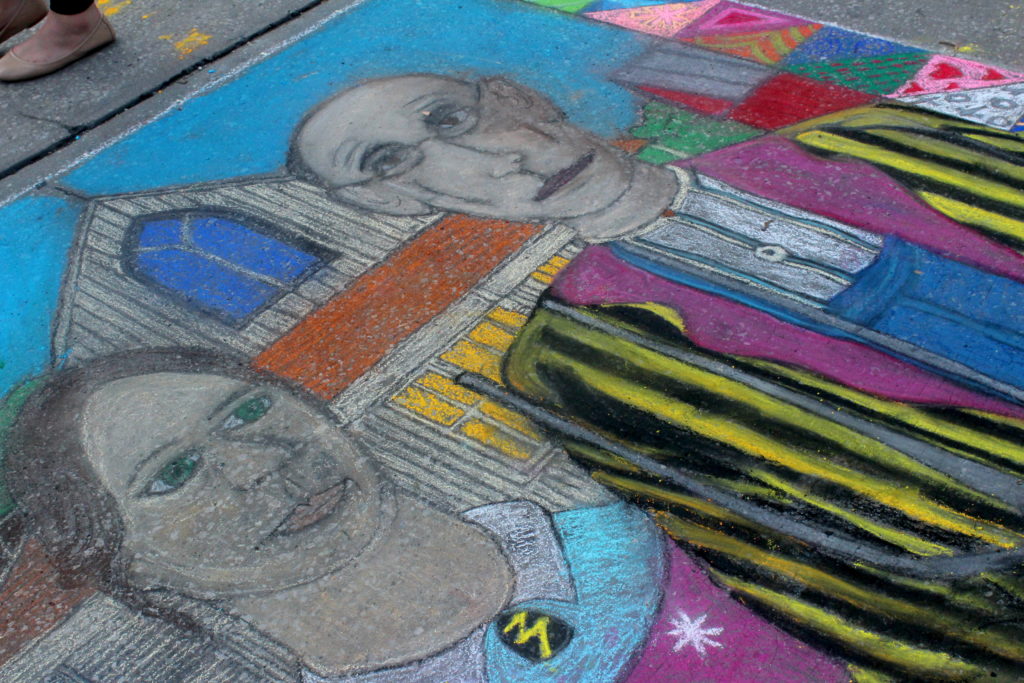 I found myself at the event a little after 6 PM, sitting on a curb with the sandwich I had just ordered. I was by a few pieces of work, one inspired by Grant Wood’s American Gothic, somewhat re-imagined as it was lined with tiled patterns on the edges and filled with exciting colors.

This had not been my first experience with a chalk festival, although it was my first in Iowa City. I was happy to have gone, as I had a chance to speak with some of the artists who were still working on some of their art. As I approached the artists who were still at work, there were often other observers watching the artists blend and color. After watching two women working on one piece, I decided to ask some questions on the meaning behind their art. 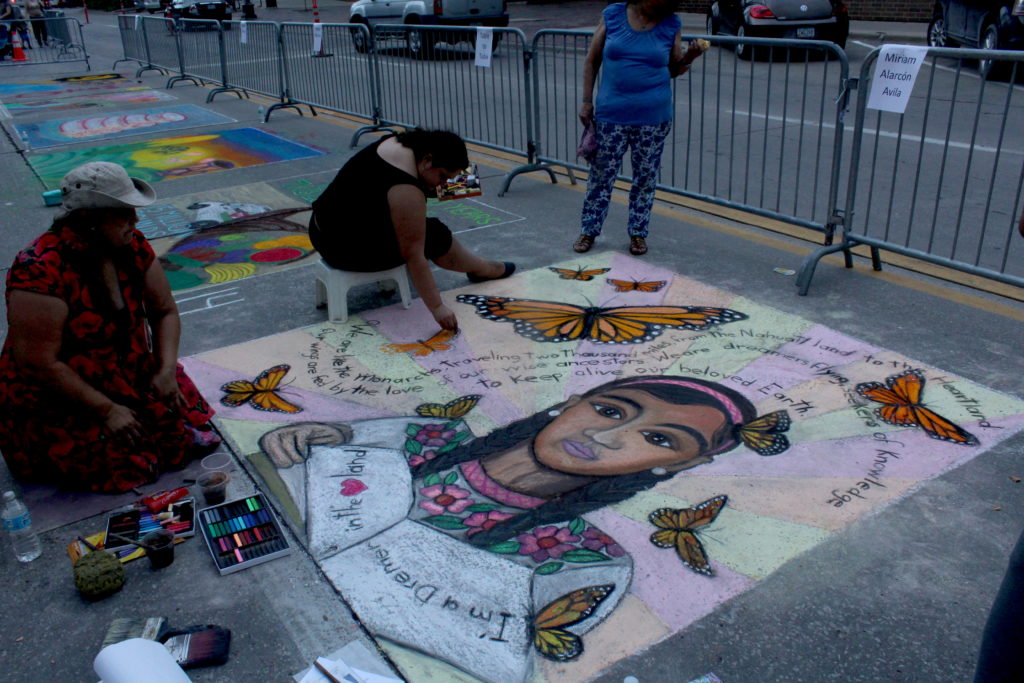 Above is the work of a lady by the name of Miriam Alarcón Avila, with some help from her sister. Upon first regarding the piece, it seemed very light and gentle, since the monarch butterflies within the work were calming. I asked Miriam if I could have some background to what her work was about, and she kindly shared her story and the meaning of her artwork.

“The monarchs are fragile and delicate,” she expressed, “Yet they travel 2,000 miles from Mexico City all they way to here.” She connected with the monarchs, and reported to me with some discontent how she saw people swatting at them and killing the delicate beings.

“Aren’t monarchs endangered?” I asked, to which Miriam nodded and sighed. She was upset at how people would just go about swatting the butterflies.

There was a sense of concern as she went on explaining her work. “For immigrants, it’s not a fun choice. Sometimes, often, it’s their only option.” She was implying threats I knew existed, but luckily have never experienced. “The world has always had a flow of people, it’s natural. Like the monarch, they’ll come.”

After getting some background on the work, I looked at it differently the second time. This was Miriam’s first time participating in a chalk festival, but her skill was showcased through her blending and eye for detail. It still remained gentle, which, what I believe, was intended, but became more grounded with its message whispered by the butterflies. 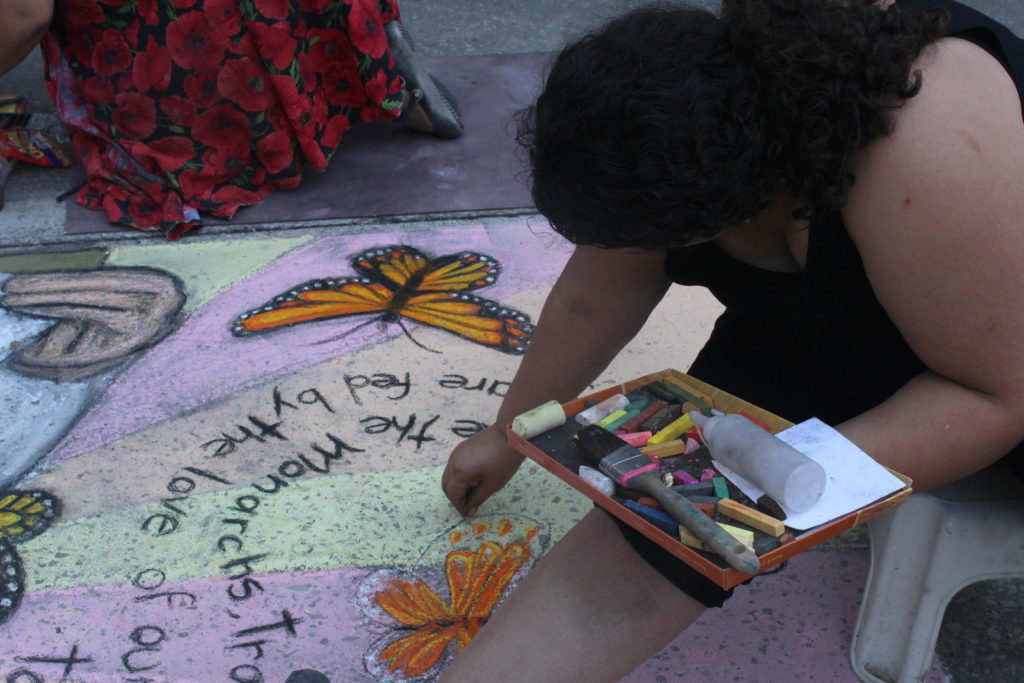 I moved on, thanking Miriam and thinking of what she had just said. People walked by with apples in hand. I saw that the bank had been giving away some free food, which I took advantage of before leaving. I explored further down Clinton and snapped some pictures of art made by businesses, others by kids as young as 5 years.

Few artists had been working on their pieces at this point, but there were still two girls bent over an unfinished chalk space as I approached. After watching these two fill in some space with a few colors, I asked if I could hear a little bit about the work. 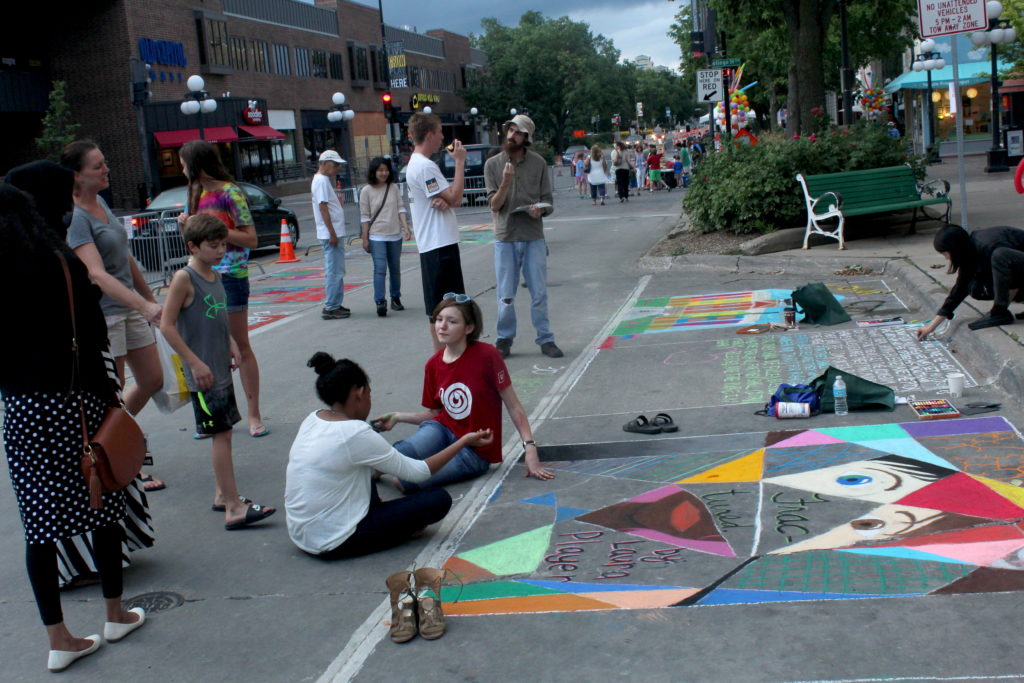 Pictured above is the work of Laura Player, who had participated in one of Mount Vernon’s Chalk the Walk festivals once before. She had begun working on her piece around 2 PM, as she hadn’t reserved a space prior to the event, but had taken one up once it became clear that there were going to be a few empty sections of pavement.

In contrast to Miriam’s background-heavy art piece, Laura’s was more experimental and improvised, as she had explained to me she hadn’t had the time to plan out any ideas. The piece was “fractured” in the sense that she split the piece up to resemble a stained-glass window.

“The two eyes didn’t line up very well, and I was running out of one skin colors already, so I decided to break the piece apart.” Since she started working later in the game, she enlisted the help of children and any others that were interested to help fill in some of the pieces. “It gives the kids something to do, they seem to like it!”

I asked Laura what her previous chalk work had been at the Mount Vernon Chalk the Walk, to which she described a more planned piece of a girl floating in a pool. “I had more time to design that one,” she chuckled.

All together, the Rock the Chalk event was fun and gave some local artists a chance to showcase their skills. Below are some more pictures from the event, taken by KRUI. 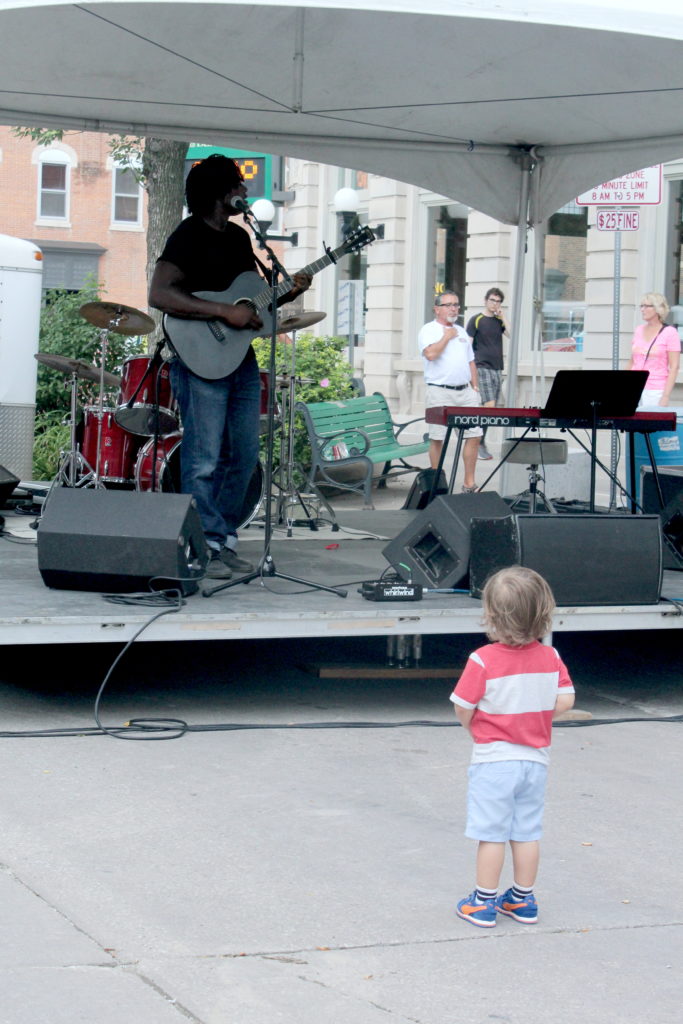 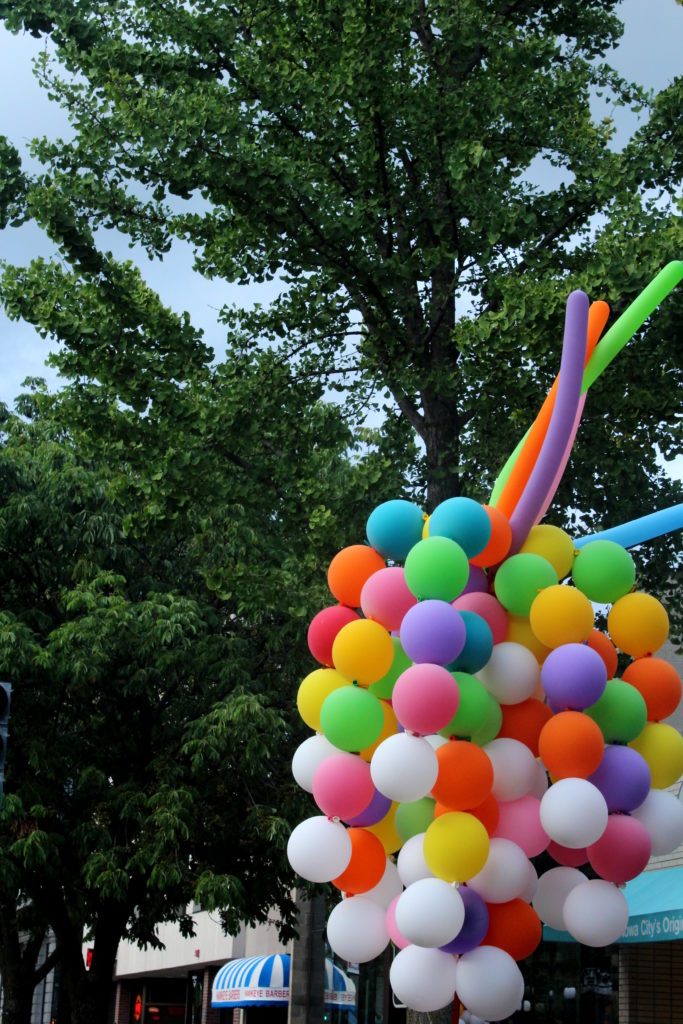 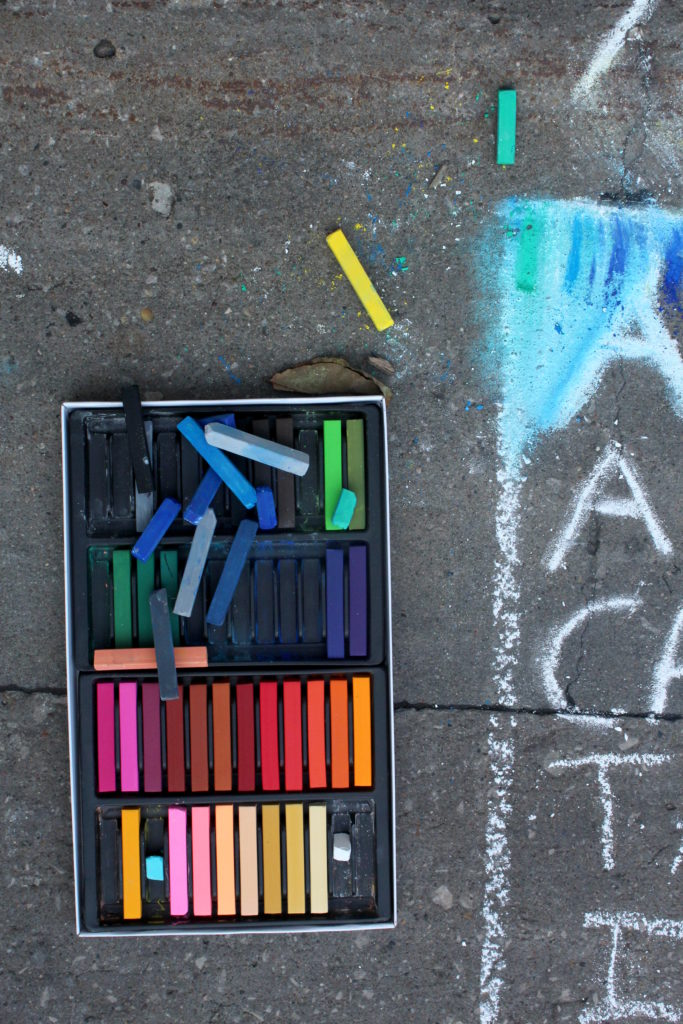 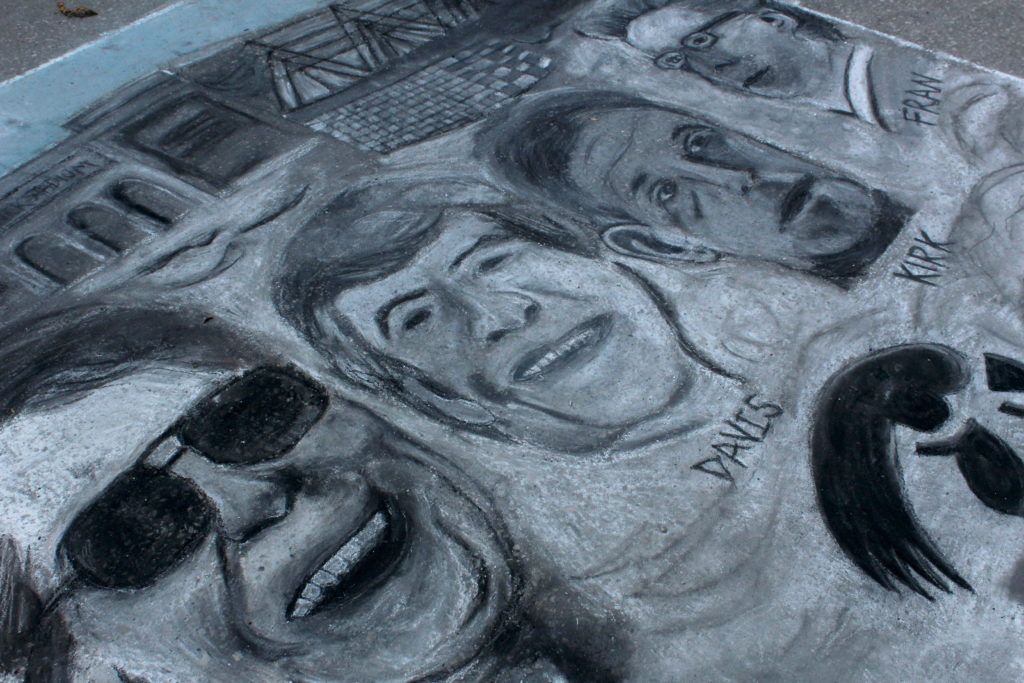 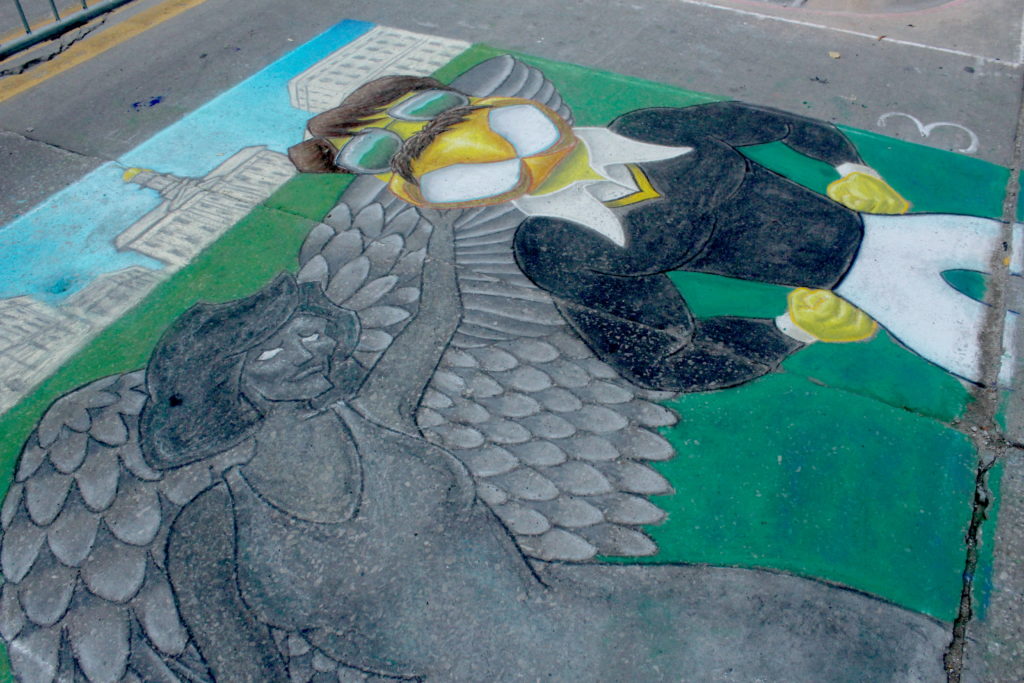 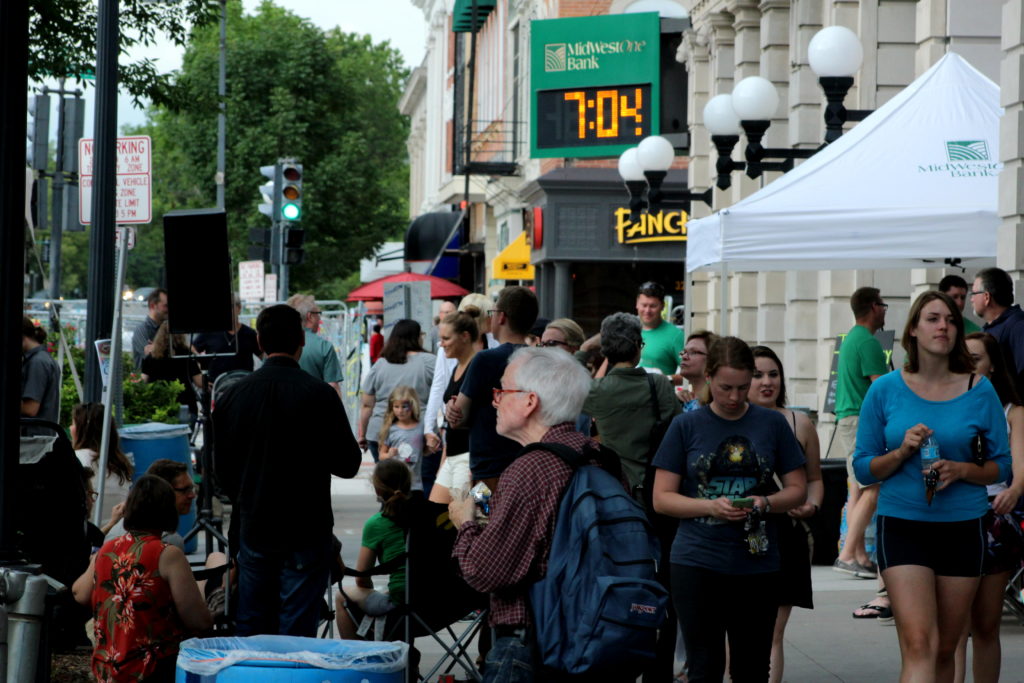 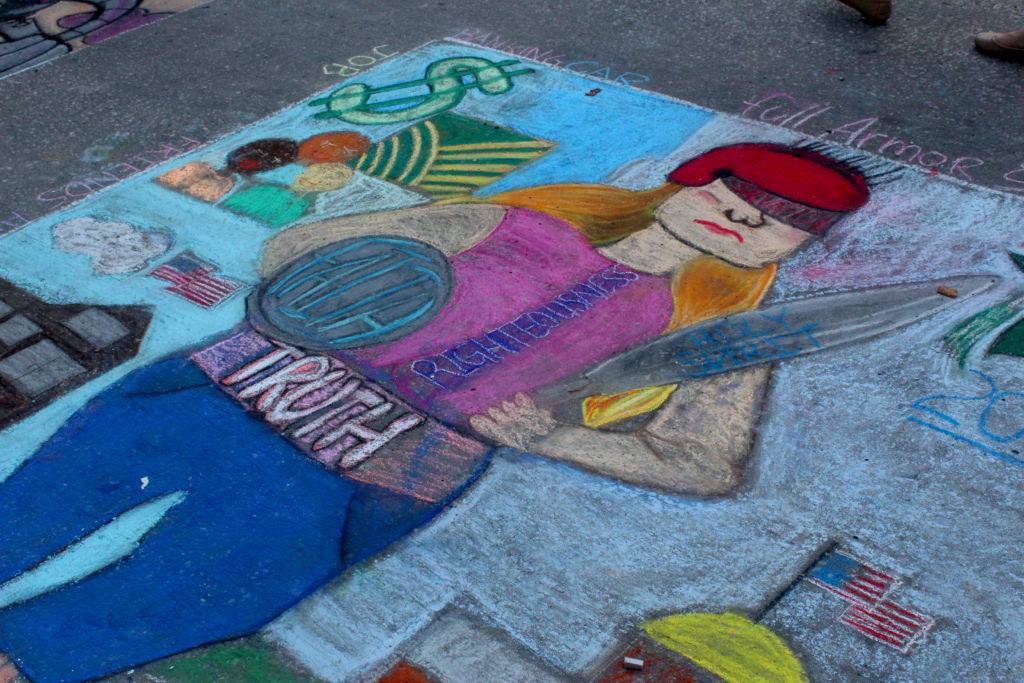 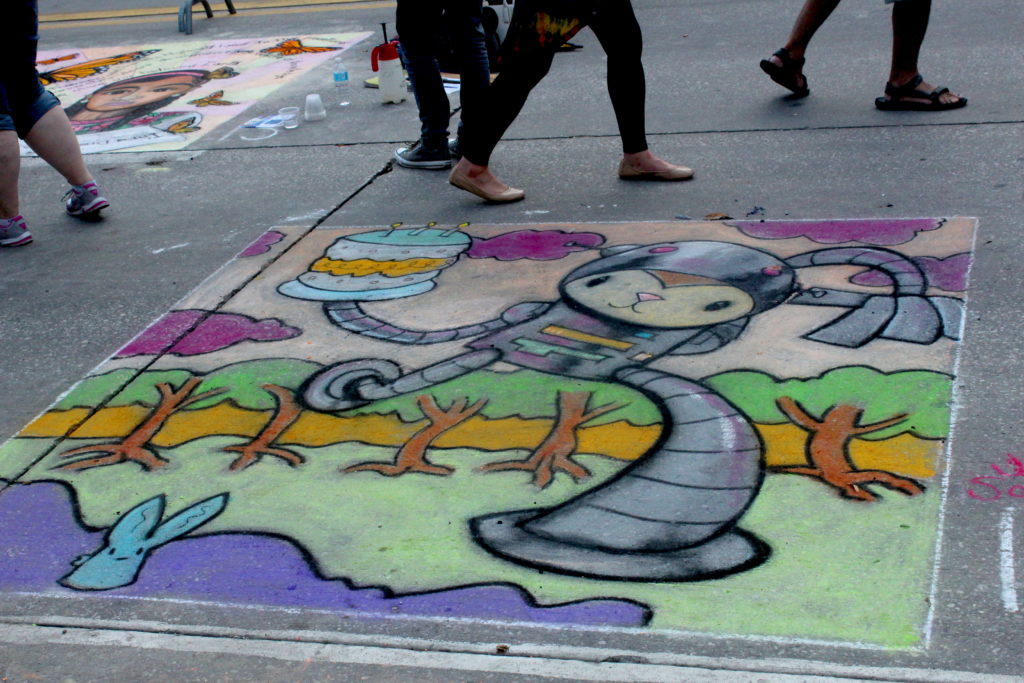 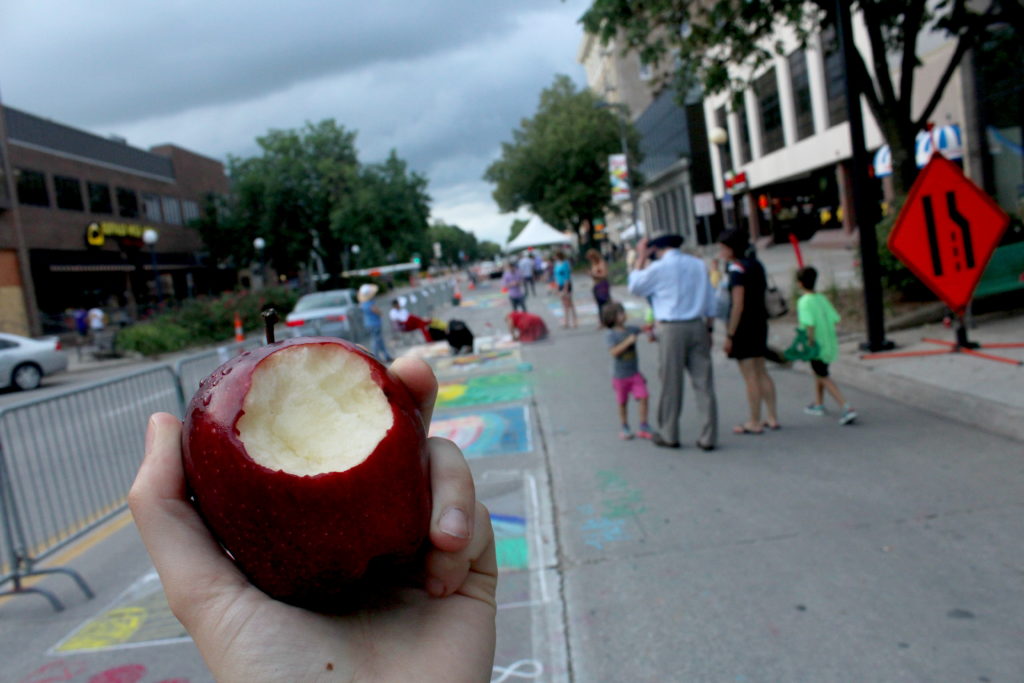 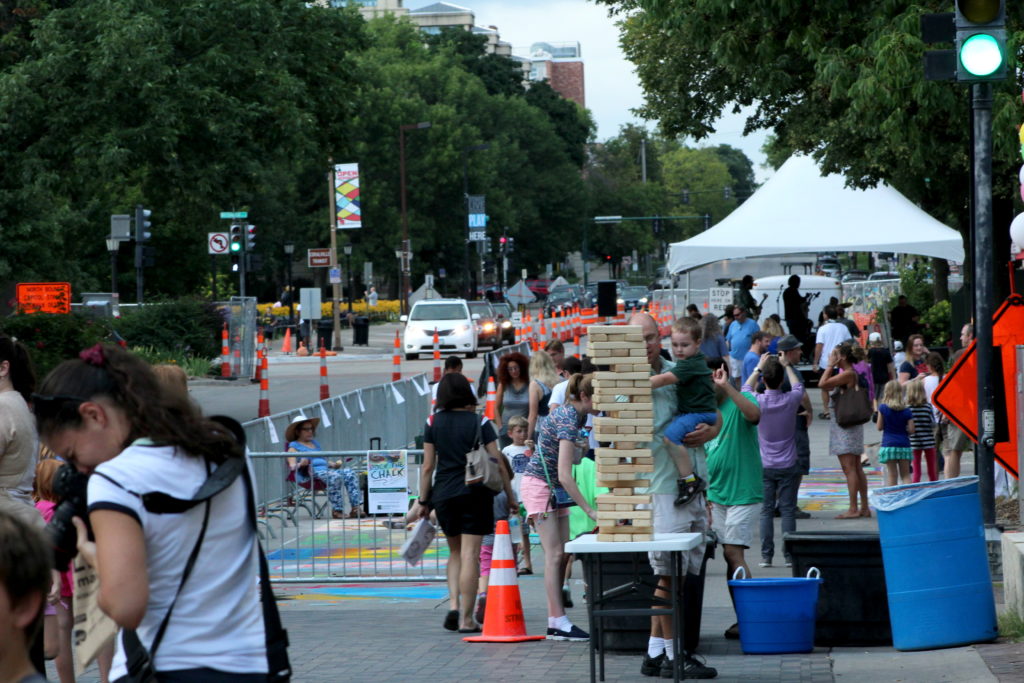 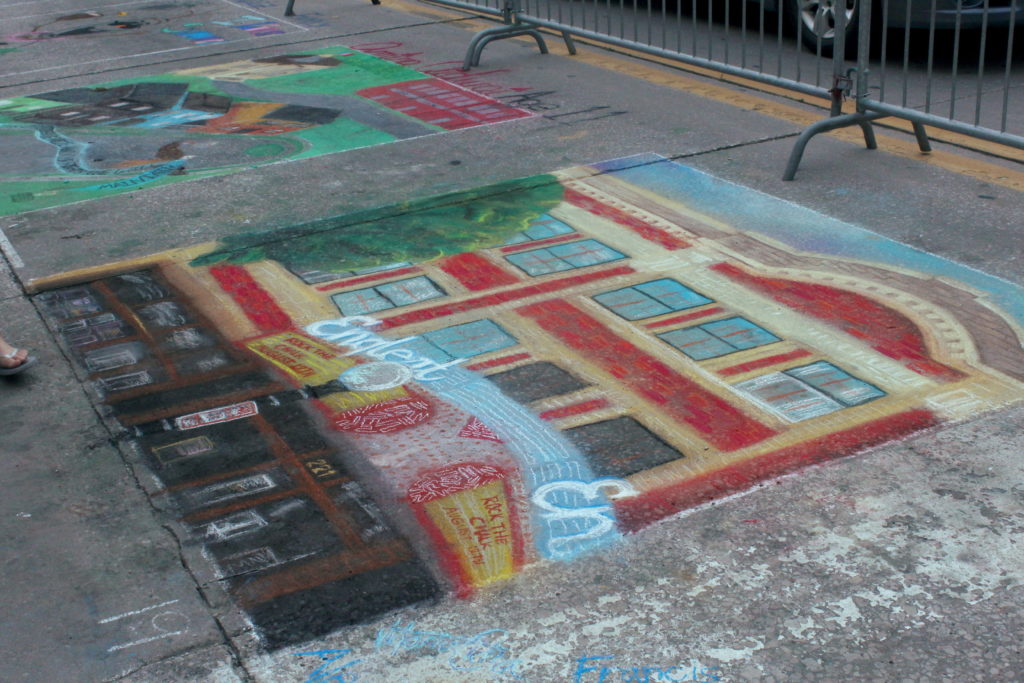 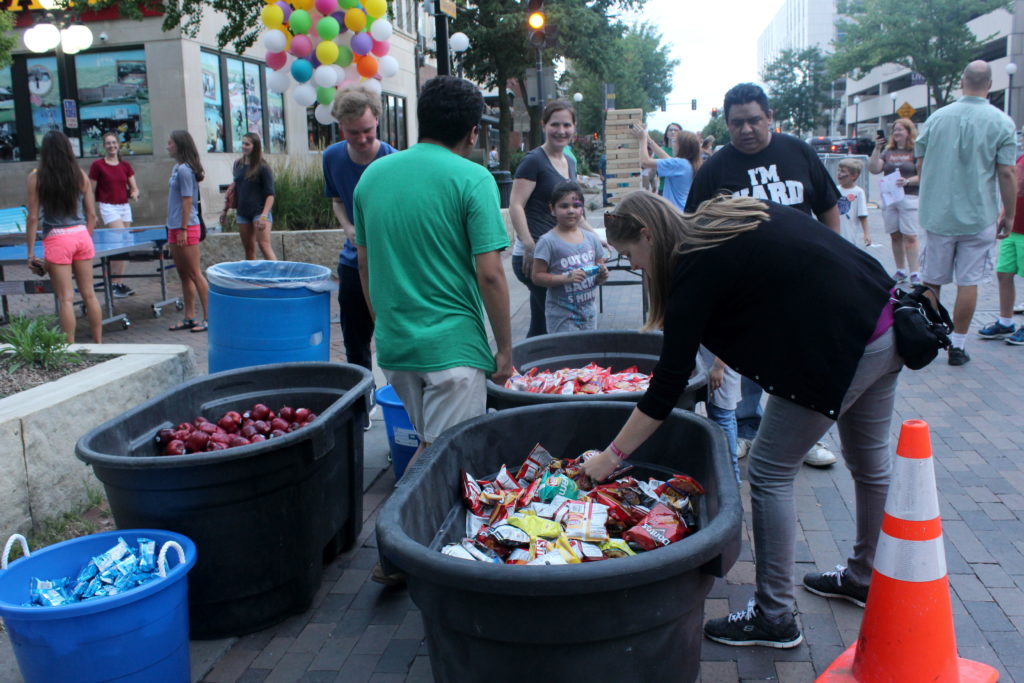 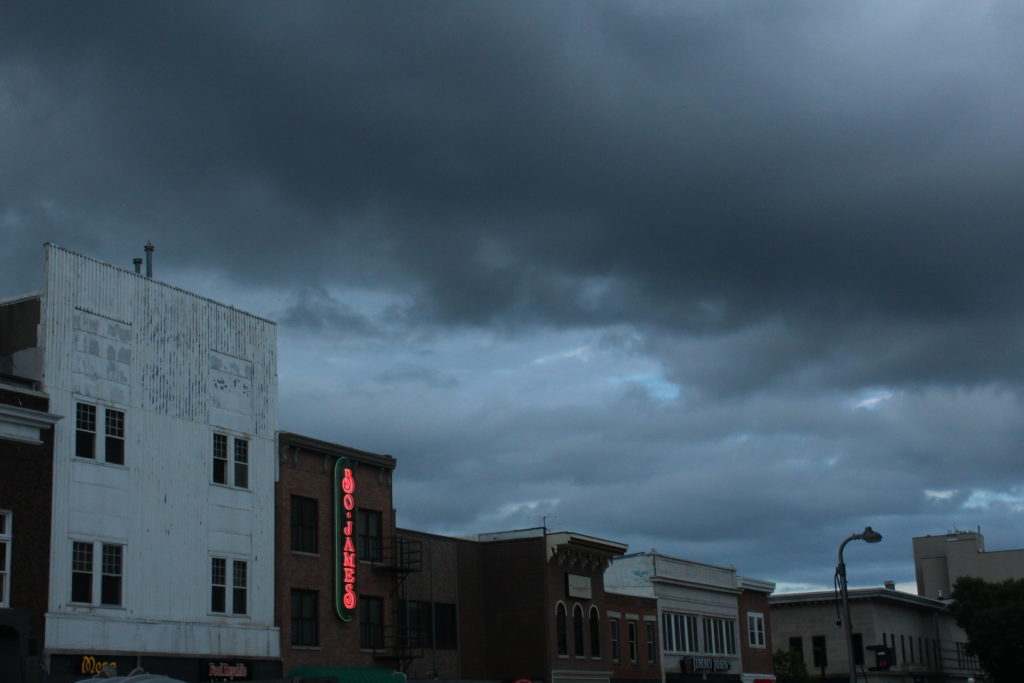