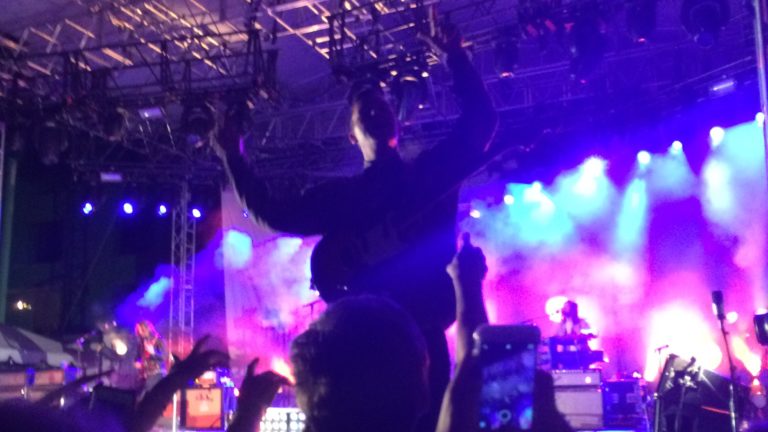 Disclaimer: This article contains material that may not be suited for minors

A couple weekends ago I got to see one of my favorite bands of all time, Cage The Elephant, in Council Bluffs at a really cool outdoor venue attached to the Harrah’s Casino called Stir Cove. This was my second time getting to seeing them live and just like the first concert of theirs I went to, the band put on an INCREDIBLE show. Like I’m still in awe at how much of their literal blood, sweat, and tears they give to perform, and I even got to touch their guitarist, Brad Shultz, when he was crowd surfing. So yeah, the concert was pretty neat. However, unlike the first concert of theirs I went to, the crowd fucking sucked.

(I was so excited I spelled his last name wrong)

Now I’ve been to quite a few concerts in my 21 years, all in different genres and varying degrees of closeness to the stage, but I have never been in a crowd of so many rude and obnoxious drunk high schoolers. And that’s not just me saying that in a “oh, all high schoolers are trash babies” way because of the two other people I went with one is a recent high school grad and the other is going to be a senior this coming year. It may have just been the pocket of the crowd we got stuck in that had all these terrible excuses for humans, but never have I ever been so seething with rage before and during a concert before.

So I figured for this month’s How-to Guide, I’d use what I gathered with my time at this otherwise amazing concert and give you a real in-depth guide to how you too can be a terrible person at a concert. Or, like, don’t.

1. GET REALLY FUCKING DRUNK
Like get so drunk that you’re running into other people and yelling at the top of your lungs when there’s not even music playing. If you really want to seal the deal, like one of the girls behind us, make sure you’re so drunk that you’re passing out on stranger’s shoulders and then end up puking before the openers even go on. It’s super classy.

So class, that even if you aren’t drunk make sure you act like you’re drunk because, like, boys find it really cute when you’re drunk. Hee hee. And when the concert is more than halfway through don’t forget to start yelling to your friends “I THINK I’M SOBERING UP” just as a reminder to everyone that at one point you were also very drunk.

2. SHOVE EVERYONE FOR FUN
Especially when there is no music playing, just start shoving people. The more people you can shove with one push, the better. And when they yell at you to stop snottily say “It’s a concert, you’re going to get pushed, get over yourself.” Because, you know, even when there’s no reason for shoving it’s still a good time to shove people. Duh, n00b.

Had to fight a few drunk teenagers and even a couple grown men, but thank you @cagetheelephant for another incredible concert. I even got to touch Brad. I’ll be happy forever.

3. TAKE SELFIES THE ENTIRE TIME
You know what all the great concert goers say, “I’m only here to take a picture with a cute boy at a concert.” (Actual quote from a girl next to us.) Who cares about the band amiright?! While you’re taking selfies you can also simultaneously shove people while you and your friends try to get the best pose. Double win!

4. AGRESSIVELY SHOVE YOUR WAY TO THE FRONT EVEN WHEN THERE ISN’T ROOM
Throw some elbows, get violent, and you can make it to the front! Even if there’s literally no space left you can make space if you really believe in yourself and throw all awareness for other people to the wind. Who cares if you’re being a dick and injuring other concert goers! Also don’t forget to get pissed at people for getting pissed at you for being a dick, that part is very important.

5. TALK ABOUT HOW MUCH YOU FEEL YOU’RE AT ~*~COACHELLA~*~
Since the concert is outside and you might have breathed in a bit of secondhand weed, that obviously means you’re basically at Coachella. OBVIOUSLY.

So there you have it, the very best way to make sure everyone around you at a concert hates you. And despite my bad experience with the crowd at this particular concert, I’d still recommend to anyone to go to a Cage The Elephant concert if you get a chance, you won’t regret it! You can check out their future tour dates here (x)