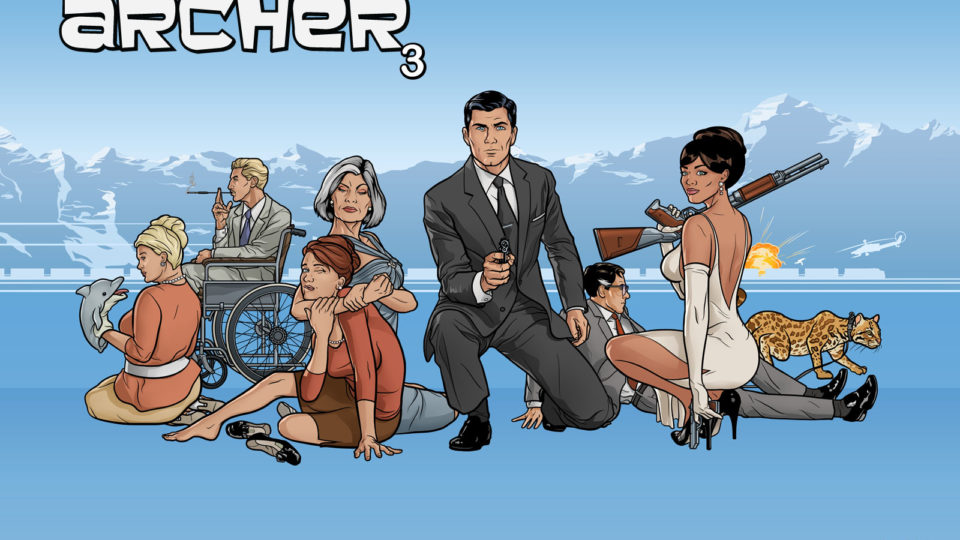 Season 2 of Adam Reed’s spy-comedy Archer ended with the horrific death of Archer’s Russian almost-wife, Katya (Ona Grauer). Not only was this a catalyst for the Archer-Cyborg Barry conflict that would continue for five seasons, but it served as driving force for much of Season 3’s action.

Not unlike the previous seasons, Season 3 spends a considerable amount of time on Archer’s sexual prowess. His first appearance of the season finds him in bed with a newly-wed woman on a small, French-Polynesian island. From there, he sleeps with a number of other women throughout the season, including his coworker, Pam. Unlike previous seasons, Archer has a shadow hanging over him during every hookup: his dead fiance. While this is mostly addressed at the beginning and end of the season, it plays an important part in Archer’s character development.

The effects of Katya’s death are most evident in the first three episodes of the season – Heart of Archness 1, 2, and 3. Following his bloody wedding, Archer runs away to a French-Polynesian island to grieve. There, he discovers his grieving process – bar-tending and banging newlyweds. He’s interrupted mid-process by man-hunter Rip Riley (Patrick Warburton), who’s been sent by Malory to retrieve Archer. Unwillingly, Rip takes Archer onto his sea plane, which ultimately crashes. Soon after, Rip and Archer are picked up by pirates. Long story short, Archer goes from grieving-lover to middle-aged-runaway to sexually-vivacious-bartender to pirate-king to hostage back to ISIS-agent in a matter of days.

These antics may seem nothing-out-of-the-ordinary for Sterling Archer, but they point to a complete loss of identity. For most of his adult life, Archer has defined himself by his field of work. He’s a badass spy, unafraid of illness or injury, taker of lives and maker of widows, bachelor extraordinaire, etc. Katya’s presence in the first place had a marked effect on Archer as she was the first woman he was willing to commit to since Lana. He was moments away from marrying her when Katya’s life was cut tragically short. It’s unsurprising that her death – and the trauma it caused – drove him to abandon his identity. The only way for him to cope with such a huge loss was erase his entire life and start fresh.

Despite the trauma and loss, Archer does manage to move forward with his life, until – in the eleventh episode – Katya is reintroduced as a cyborg created by Krieger in the ISIS lab. This causes intense conflict for Archer, whose love for Katya has now been pitted against his hatred for cyborgs. In the end, his hatred wins out and he must let her go.

Aside from Archer’s character developments, the season contains noteworthy moments for its other characters. Pam becomes Archer’s sexual partner, which further solidifies their relationship while providing even more conflict for Archer as the generally unappealing Pam becomes the “best sex he’s ever had.” Pam is also given a moment to shine in the seventh episode. Here, Pam’s skills as a drifter come to light as the gang tries to recover Archer’s “stolen” car. By the end of the third season, Pam has become a bit more than a punchline, and even attempts to become a field agent after passing the admittance tests with flying colors.

Another punchline character gets his moment in the spotlight in the third season: Ray Gillette. Ray started out as a temporary character, meant to last only one episode. The character got such a strong response, however, that Reed decided to keep him in the mix. The problem that arises from this is that Ray was a “novelty character,” specifically the “sassy gay friend.” There is often a tendency with gay characters to rely on stereotypes and comic relief. Reed did a decent job addressing this challenge, immediately taking Ray’s “flamboyance” down a few levels and humanizing him in several different ways. By the end of the third season, Ray has been established as a badass in his own right. He’s a kickass field agent, grew up familiar with manual labor, and is extremely intelligent.

Unfortunately for Ray, Reed still needed to kick the character in the crotch a bit to make him more “human” and less “novelty,” so Ray got blinded in one eye and paralyzed. Ray’s handicapped status actually acts as a “bit” in the show, and he frequently alternates between “abled” and “disabled.” Ray’s other kick-in-the-crotch comes in the form of his brother, Randy. Ray’s trip to his hometown of Ferlin, West Virginia gives the viewer a peek into what Ray’s childhood consisted of: intolerance, toxic masculinity, and filth. It also allows us to see Ray interact with a loved one. In one episode, we gain sympathy for Ray as well as a reason to rally behind him. He’s sweet and loyal, but strong and fearless as well.