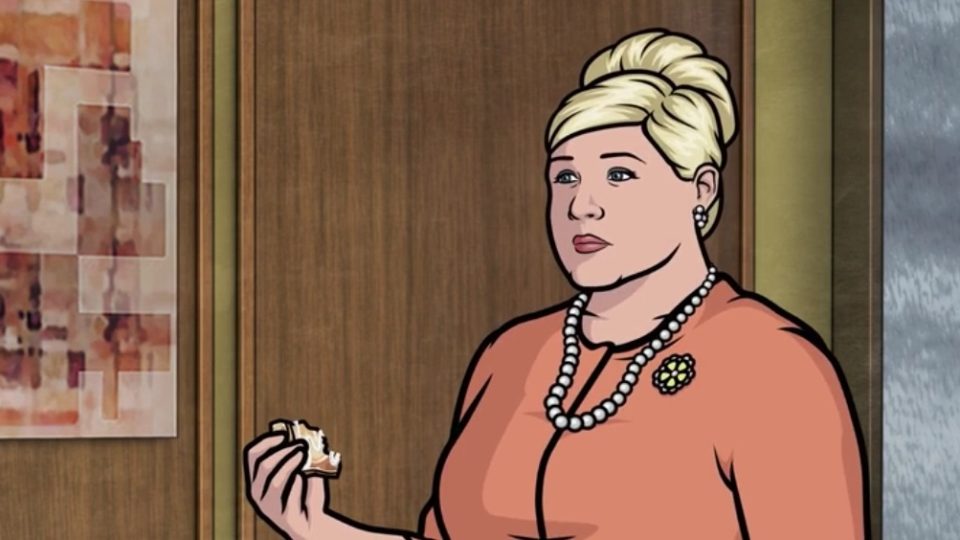 As I mention in my last article, the character of Archer was meant to be a comedic, modern-day James Bond, with a few more moral scruples. Basically, Archer is supposed to be the jerk we can root for. He’s a badass spy, smooth with the ladies, and reeks of self-confidence. At the end of the day, though, he is nothing more than a grown-up schoolyard bully with a maturity level to match.

To be fair, Archer isn’t the only character at fault. While Archer does act as a foil for the other employees at the ISIS Spy Agency, every character has their problematic moments.

The first season’s humor is mainly offensive, which easily establishes Archer and his colleagues as douchebags. Racist jokes, queerphobic jokes, fetish jokes, addiction jokes, sexist jokes, and – Adam Reed’s favorite – fat jokes. Now, most of these are made purely for the shock factor. As the audience, we’re supposed to be smart enough to understand that these jokes do not ring true and are meant to appreciate them as laughably awful remarks for anyone to make. One way Reed tries to achieve this effect is by having the show acknowledge – and therefore, apologize for – its humor.

When watching season one, it’s a challenge to go two minutes without hearing someone quip about Pam’s weight. Even characters like Lana and Cyril – whom we’re supposed to regard as morally above Malory and Sterling – can’t help but take cracks at Pam’s obesity. While it’s true that Pam almost always calls attention to or defends herself against their comments, this isn’t enough to excuse the fact that Reed uses fat-shaming as a humor-crutch.

A similar situation arises once Ray Gillette is introduced. Ray starts out as the token gay character, thrown in for one episode to provide comic relief during a life-and-death situation. Because he was not intended to stay in the show, Adam Reed chose to voice him – and also chose to give him a “gay” voice (high-pitched, feminine, and with a bit of a lilt at the end of each sentence). Ray got a positive enough response that Reed decided to keep him around. The situation doesn’t call for complaint on Adam Reed – a straight man – voicing a gay character. It does, however, call for some critical analysis on the way Ray is presented and treated in the show. Like Pam, he’s given development and actual characteristics that make him more than his label. And just like Pam, he is treated as an “other.” Every gay joke possible is made at his expense, even in the face of danger. Ray tries to defend himself, but that isn’t enough to excuse the show, once again, falling back on lazy humor trends.

Like any show, the first season of Archer is pretty rough. It’s not supposed to be an example of the show at its zenith, and I can appreciate it as both a rough draft and the required exposition for further story/character development. What I have a difficult time appreciating is the blatant use of offensive humor. Even with an understanding that the characters are not on any moral pedestals, it’s disturbing to see what is considered humorous. By continuing the trend of treating peoples’ bodies and sexualities as nothing more than punchlines, we continue the idea that there is a “normal” and an “other.” Though Archer tries to be a somewhat forward-thinking show, it’s clear that “normal” – and therefore, acceptable – is still straight, white, and (toxically) masculine.

The first season of Archer is available on DVD, Amazon Prime, and Netflix.