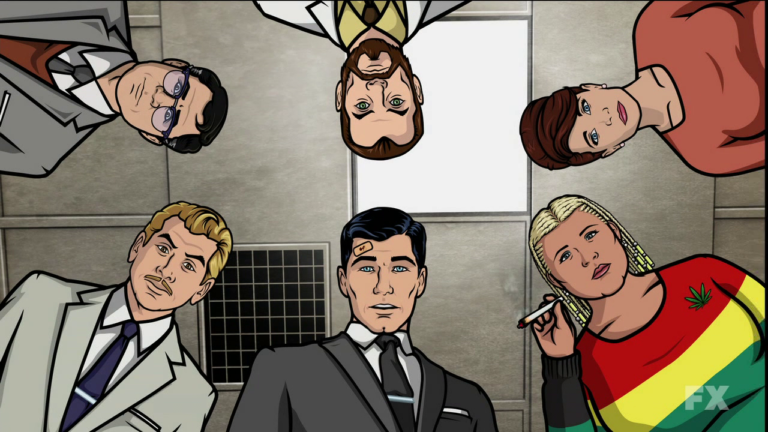 So, I’ve done a lot of talking about Adam Reed’s attempts make his audience root for Archer. He is established as a complete asshole in almost every way possible. However, once season two rolls around, Reed changes gears and makes every effort to victimize Archer. After all, how else do you manufacture sympathy?

Reed goes right for the jugular and kicks off the second season with Archer having to fend off the advances of 16-year-old Anke, who he’s been charged to protect. No one believes him when he cries “attempted rape,” and he spends the entire episode being berated by his coworkers. The episode not only serves as a way to get us on Archer’s side (as he is very clearly being sexually harassed by his charge), but as a way for Reed to further an agenda. He attacks the issue of society’s view of male rape victims. Not only does no one believe him because of his sexual promiscuity, but also because he’s an adult man and she’s a young woman. There’s no possible way a young woman could be pressuring an adult man into sex, right? Right?

Moving forward from my PSA, Reed starts off season two by making Archer a sexual assault victim. Soon after, he hits us with another doozy: Archer being framed in a paternity test. Long story short, Archer’s favorite hooker Trinette skews the blood test to get him back for being a shithead. Once again, no one believes Archer when he says the baby can’t possibly be his solely because of his promiscuity. Archer’s a liar and an asshole – even though he tampered with the blood test and replaced his blood with Cyril’s, the baby has to be his. Once again, Reed uses humor to a) address societal double standards and b) humanize Archer.

A few episodes later, Reed goes straight for the heart strings and tackles one more double standard that puts men in an unfortunate situation – breast cancer. Episode eight starts with the group thinking Malory is at risk of breast cancer. Already, we feel bad for Archer because his mother may have cancer. The tables are turned by the end of the episode, and after about twenty emotional, alcohol-soaked minutes, Archer not only has cancer, but it spreads after his initial surgery. The following episode, Placebo Effect, – one of my favorites – follows Archer on a weed-and-chemo-fueled rampage as he tries to find the man selling fake cancer drugs. By the end of this episode, Archer is a cancer survivor who saves countless lives (including his own) by stopping the sale of fake cancer treatment drugs. However, there was one life he couldn’t save – his elderly, cancer-ridden friend Ruth. If you don’t have sympathy for Archer at this point, I don’t what will convince you. A dead fiance, perhaps?

That’s right. Adam Reed ends the second season of Archer with Archer’s fiance getting killed right as they’re about to get married. While Katya returns in later seasons (in some form), her death is a major blow to Archer, and he spends the first three episodes of season three on the run in Polynesia, trying to cope with Katya’s abrupt end. Archer gets shit on in almost every way possible throughout the second season, and I have to admit that by the end, I developed a soft spot for the bastard.

Archer is a problematic show for many reasons, one of them being the fact that Adam Reed considers sex with your unconscious friend humorous, not rape (“Blood Test”). Reed does a 180 with a this view in a later season, but that doesn’t excuse the events of the previous episode.

I will commend Reed’s ability to use humor as a way to address the double standards he observes in society. While it’s clear that Reed has an alternative agenda, none of the episodes feel like PSA’s. Even blunt statements about men needing to be checked for breast cancer or Archer’s promiscuity and age make him ineligible as a rape victim come off as satirical rather than heavy-handed. Reed is a very talented writer, but he still has a ways to go as far as awareness of social issues.

Season two of Archer is available on FX’s website and Netflix.

One response to “Between the Lines: Archer, Season 2: Archer the Victim”