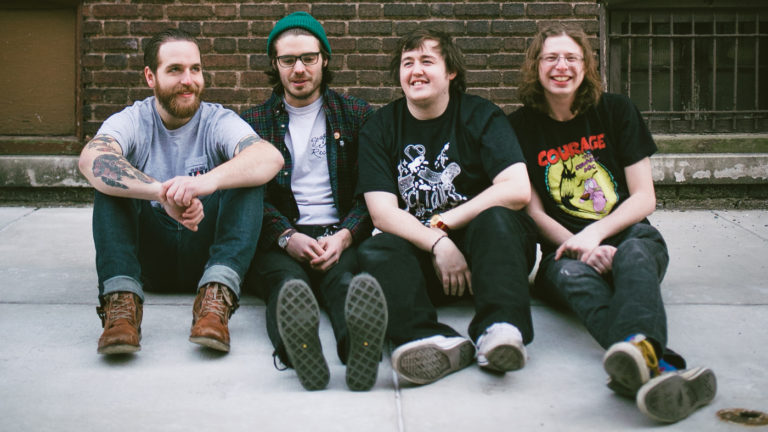 Modern Baseball are back with their third LP; a solid album full of songs that deal with a huge range of human emotions. From loneliness to drunkenness, all the way to spending too much time on the road, this quartet potently presents us with the way it feels to grow up a little too fast.

With their new album “Holy Ghost”, Modern Baseball finally finishes what felt like a trilogy of adolescence with their saddest and most emotionally charged record to date. This is their first album that wasn’t self recorded, and it shows from the very first moments of the album to the very last. Not only are the lyrics the best they’ve ever been, but the instrumentation is more complex as well.

The album opens with a little acoustic number, a song that contains heart wrenching discordance and the classic Modern Baseball sentimentality that we’ve come to love over their last few albums.

“Holy Ghost” is a short, contained introduction piece, and it decays into the breakthrough pop-punk jam that is “Wedding Singer“. This song also starts one of the thematic questions I tried to trace through the album: do these lyrics contain religious sentiment? What’s up with the album title?

At close examination of the lyrical content, we find Modern Baseball doing what they’re used to: making references to the terrors of modern romance (“Locked your love in a screenshot”) and leaving us with yet a bit of positivity (“This year we’re gonna stamp out the sorry feeling”).

“Note to Self” might be one of my favorite songs on the album. This song has a very emo sound, proving once again that this group is rebranding what it means to be pop-punk at each turn. This song is introspective (check the name of it) but does more than ask questions about the self. You’re ardently searching for inspiration–then apathy cuts in. What’s the point of staying awake? Might as well lay in bed. Well, maybe not, but that’s how this song will make you feel. The song turns hectic (this album has the quietest and loudest moments from Modern Baseball) before transitioning into the next song, “Mass”.

This was another one of those songs where I searched for some sort of religious sentiment. Was he going to mass and praying to the Holy Ghost? I mean, I couldn’t help but think that these ideas were buried somewhere within the music, but maybe my search for something that isn’t there is the exact effect they wanted this album to have; I couldn’t find the Holy Ghost in their music, and neither could they. This song has my favorite lyrics on the album since they connect touring, fame, being away from home, and how those things can break important relationships. Now they’re just swimming in the rubble of past lives.

The boys in Modern Baseball have been open about their dealings with emotional stress and mental illness. They came out with a  mini-documentary that is both heartwarming and life-destroying at the same time. Check it out:

Songs like “Everyday” and “Hiding” show Modern Baseball growing up, in the span of a 3 minute rock song, more than they have their whole lives thus far. “Everyday” is about insignificant moments in life becoming significant through hindsight, a sort of patience we all learn in our early adulthood. “Hiding” has a string section in it (oh my god?? Heck yeah). Untouched beauty and unrelenting noise crash in this piece.

The first half of this album was credited to one singer in the band (Jake Ewald) while the second half was penned by the other guitar player (Brenden Lukens). While Brenden’s songs have always been my favorite on their previous albums, most of them are very easy to miss after the complex emo overture that was the first half.

“Coding These to Lukens”, an abrasive rock song that feels out of place after “Hiding”, is followed by “Breathing in Stereo”, and in the mode of most Brenden songs, it ends abruptly.

At this point in the record, we can tell that the guys are really tired, upset, and just want to go home for some peace and quiet.“Apple Cider” is an indictment of the idea of “forever” in relationships. This song, like previous tunes on the record, contains a struggling piece of positivity that tell us “Hey, nothing lasts forever. Not even your relationship. It isn’t real, and it can’t happen. But, you should keep going. Don’t let it get you down too much.”

The next song, “What If”, caught me with my attention fading. The songs are fading together; thematically, I’m all in. But I wouldn’t pick this song by itself without playing the others first. “Just Another Face” was a great way to end the album, and brought me back into the moment.

All in all, I think this is easily Modern Baseball’s best album on a lot of fronts. It’s complex, grown up, serious, but still has all that fun pop-punk energy we will always want as angry young people. At the same time, I found myself wishing to hear things off of their last two albums at certain moments in this one. But if Modern Baseball has taught me anything, it’s that I need to pick up the pieces and move on.

Favorite tracks: “Note to Self”, “Hiding”

You can find the album on Spotify (below), YouTube, or you can buy it on their website.