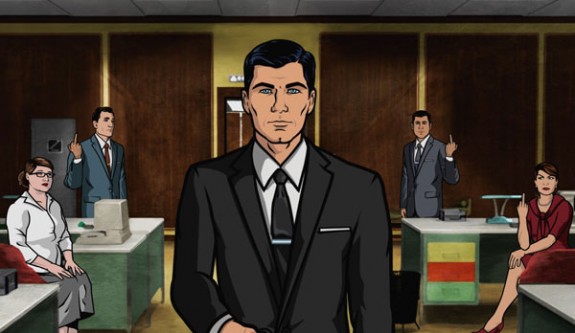 We all have that one friend who’s constantly trying to get you to join in on their obsessions – this steamy kale cookbook, those panic-curing ‘shrooms – you know who they are. As an open-minded, laid-back person, I’m the perfect prey for my Obsession Friend – we’ll call him Randy. He finds something cool/hilarious/intriguing/orgasmic, I have to know about it. About 83% of the time the obsession takes, and I find myself ovaries-deep in shows and music I normally wouldn’t have bothered with.

So far, I’ve decided to count this more as a blessing than as a curse. I’ve come to genuinely enjoy music like that of Tom Waits and Lin-Manuel Miranda and shows like Jessica Jones and The Twilight Zone. As much as I hate to admit it, the bastard has decent taste.

As with everything, there is a grey area. While Randy has introduced me to some wonderful media, he’s not always on point. Example: Archer. The plot of the show is innocent enough – a devil-may-care, alcoholic secret agent with mommy issues incites outrage with everyone around him. Hilarity ensues. All right, I’ll bite.

And bite I did, right into a racist/sexist/homophobic/body-shaming sandwich. Imagine the look of shock on my face when I realize my dear, intelligent, socially-aware friend Randy enjoys adult animation based on insulting every group possible in the name of humor.

“It gets better,” he assures me, “the first season is pretty rough. The humor gets better as the show goes on, and besides they’re all horrible people. They’re not good people, this isn’t how good people are supposed to act. They’re messed up people just being…horrible.”

I couldn’t agree more, Randy. That’s exactly what the show is – horrible people doing horrible things who are, somehow, getting you to root for them.

And that’s where I start to side-eye.

This show was made with good intentions, it really was. Adam Reed didn’t go into it thinking, “How many people can I piss off whilst hiding behind humor?” In an interview with AdWeek, Reed reveals that,

“…Somebody had given me…a matched set of the James Bond novels—paperbacks from the ’60s…James Bond, in the books, is just a bad person. Obviously he drinks too much. He’s sort of a cold-blooded assassin and there’s plenty of racism. But there’s more than one occasion where Bond just rapes these women but in a ‘romantic’ way where you can practically hear the violins swell. I mean, Fleming writes stuff like, “Bond twisted her arm behind her back and took his reward.” And I’m like, ‘Holy shit. James Bond?’

That sort of got the wheels spinning. Like OK, what if this guy was just the biggest dick ever? How could you do that and still root for him? I guess the genesis really came out of the James Bond novels. We’ve never had Archer rape anybody, though.”

Sterling Archer is nowhere near as bad as the literary James Bond. Hell, I’d root for him over the cinematic James Bond any day, who still has a lot to learn about the rules of consent. But Archer has a long way to go before it’s characters can be completely root-able (not a word, bear with me). The show is a great example of how to highlight social issues in light, comical way. It’s also a great example of how far we have to go in understanding how deeply those issues run.

Let’s start with that last line, shall we? “We’ve never had Archer rape anybody though.” Sterling Archer has never forced a woman to have sex with him. Ever. It’s never mentioned nor shone, so I accept it as canon that Archer has never done this. However, there are plenty of instances where Archer’s sexual partners (and, sometimes, Archer) wake up after being extremely intoxicated. Actually, that’s true for the entire show. About 83% of the sexual encounters in the show happen with the assistance of copious amounts of alcohol. That’s a huge grey area that’s really coming under fire right now, especially on college campuses where alcohol and sex easily become mutually exclusive. With consent being such a hot topic, it’s interesting to take a step back from the experiences and look at where those experiences begin: the media.

A lot of what Adam Reed does with Archer is done in an attempt to shed light on sensitive situations. As good as Reed’s intentions are, I have to fault him for continuing the idea that trashed hookups are “normal” and not problematic situations, among other things. The fact that he believes his show promotes consensual sex is a great example of how much catching-up our media has to do. “Rape” is still mainly synonymous with sexual violence and “no means no.” We can publish article after article on consent, but until our televisions stop promoting alcohol as the ultimate wing-man, we will struggle to make headway.

Stay tuned for the next article where I begin to take a look at Archer season by season.

One response to “Between the Lines: Archer”