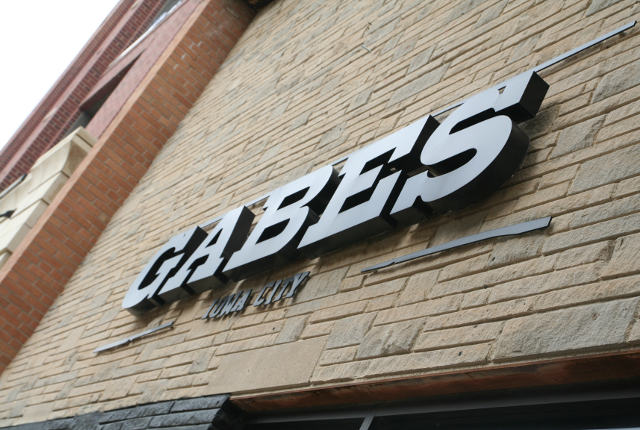 On January 4th, I traveled back to Iowa City to see a free show at Gabe’s. Before then, I had never been to a show in the bottom floor of Gabe’s and it was a new experience. It definitely had a different atmosphere than the upper floor. I felt as if it was harder to pay attention to the musicians and bands because you couldn’t see them as well unless you were standing right in front of them. Also, it was way too loud for that small of a space. Since it was a free show, most of the musicians and bands were not well-known and only drew in a very small crowd. Almost all of the acts were acoustic singer/songwriters, with the exception of three other bands.

Take a Breath was one of the bands that played; they are an alternative rock band from Pittsburgh, Pennsylvania. They played songs off their album ‘The Anatomy of a Rose’ . For the most part the crowd consisted of about twelve fan girls that were front and center for almost all the acts that night. They had a good stage presence, but the sound was up way too high and they sang to close to the microphone, so it caused a lot of distortion and was not pleasing to the ears. Besides that, after listening to their tracks online, they’re very good and if it were under different circumstances, I’m sure they sound better live.

Time Atlas was the main act of the night and definitely were the most talented ones that played. They are a pop/alternative rock band from Minneapolis, Minnesota that formed in 2015. They sound scarily similar to the previous group, and were not very different in that aspect. They do have promise and are relatively popular but there was nothing about them that really stood out to me. They just released their debut EP “Clarity” and you can check that out here.

Kickbox is a pop punk group from Chicago, Illinois. They reminded me a lot of Real Friends as far as their sound goes, it was almost like they were trying to mimic them. They really got all the fan girls going with their teenage angst lyrics, and when they would accentuate

the f-word anytime they sang it in one of their songs. Overall they were good enough to keep my attention which is a pretty big accomplishment. You can check them out here.

The rest of the acts that played that night were singer/songwriters that all pretty much sounded exactly the same. I know that may seem a little harsh but if you want to make it as a singer/song writer you have to find a way to differentiate yourself from all the other ones that are out there or else you are pretty much just background music for the audience.

One of the singer/songwriters was Brian Moroney. He is from Chicago, and also plays in Airways an indie rock band from Peterborough, England. Brian had a really nice voice and played an all acoustic, but like I

said, he wasn’t very unique in that aspect. He did draw in a lot of attention from the ladies though and had a pretty good presence on stage.

Next is Clay Borrell, a 19-year old singer/songwriter and entertainer from Minneapolis, Minnesota. He was very good at getting the crowd going; well, the crowd that was there

with his young Justin Bieber type of sound. The fan girls went crazy over him which made him even more energetic on stage. If you’re interested here is the link to his to YouTube account.

Lastly, there was Cup Check: a female-fronted pop punk band from Chicago, Illinois. Their female lead singer has a great voice but not a very attention-capturing presence. It may have that way just because it was an all acoustic set rather

than their usual rowdy pop punk sound. The lyrics were very well-written and they had an overall good sound but sounded very similar to the other bands that were there. The only thing that made them different was their female lead singer.

Overall it was a good show; it wasn’t the greatest one I’ve ever been to, but it was still entertaining. None of the bands sucked so I would say it was worth the trip back to Iowa City for the night.