On Friday, I was lucky enough to watch a discussion of panel members Andy Zax, Megan West, Jessica Johnson, and Sean Moeller at the beautiful Iowa City Public Library on Friday. Every me 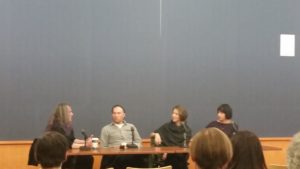 mber is extremely successful in the music world. Andy Zax, a music producer and historian, was nominated for a Grammy; Megan West has worked for Soundcloud for three years; Jessica Johnson, employee at Downtown Records; and Sean Moeller, employee at Daytrotter.

During the discussion, the panelists talked about how technology is changing music and the industry. The industry is becoming less personal, partly because everything these days is online. It is definitely convenient to be able to find anything and everything on music sites, such as Soundcloud, but it is talking something away from the viewers experience. One of Johnson’s missions is to personalize the industry again. She helps manage bands and tries to make sure their relationship is less about the sales and more about the music and she is also trying to make sure that the band’s relationship with their fans is more of a friendship, and again, less about the money. 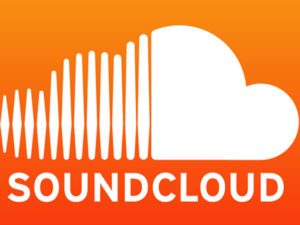 West explained that Soundcloud is trying to make listeners experience more “natural and perfect in the moment”. They are always tweaking their algorithm to make it better, make it so more the of the music that comes on their page is something they would actually want to listen to. Zax described his listen experience with Soundcloud’s competitior, Spotify. Spotify creates a weekly playlist of the songs they thing the view will like based on what they have listened to. Zax explained that most of the time, this playlist is spot on. That’s twenty-five out of thirty of the songs he knows and loves and the other five he hasn’t heard before, but he really likes them.

Moeller is also trying to make the listener experience more personal. He puts up live tracks of bands that aren’t as well known on his website. This gets them some publicity and, hopefully, more ticket sales. In his opinion, the only way you can really know if you love band is if you see them live. He wants the music he puts on his website to make people want to go see shows so they can get to feel more connected to the band and the music they are playing.

The music industry has received some bad press over the past few years, but with these panelist working hard to make it great again, we have nothing to worry about.