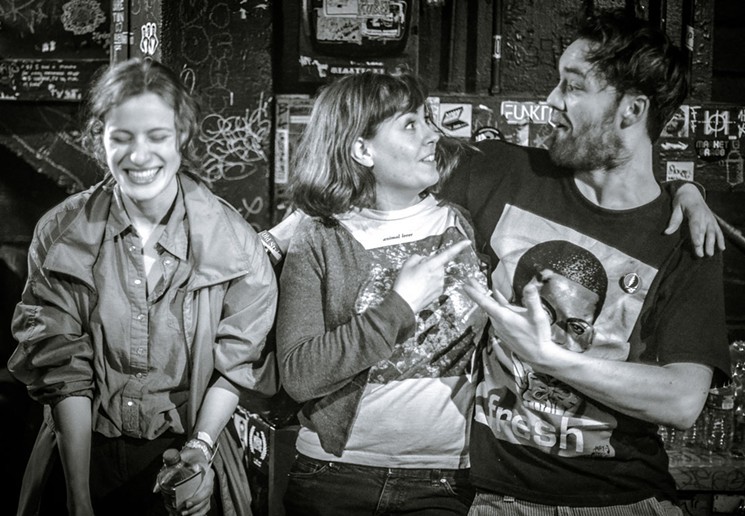 On Saturday night, Daisy Chains brought music “Above Board” to the Trumpet Blossom Café at the Mission Creek Festival with the support from Savage Young Taterbug and Gem Jones. The sweet and bitter lyrics mixed with his distinctive voice fascinated the crowd as they came closer to the stage. The six songs they performed could not satisfy the crowd, and I hoped I could get an album of all their records to keep listening.

I arrived at the Trumpet Blossom Café two hours early to meet with Daisy Chains and get a sense of the atmosphere of this lovely and cozy place. I like their warm lighting, dedicated ornaments in the house.

Around 8:30 pm, Daisy Chains came to my table, and we started our conversation. “We did a ten-day tour in Midwest, and now it is about time to perform in my hometown” said Iowa City native, Drummer Walker Neudorff. The guitarist, main vocalist E.A. Bambery, and bassist Allison Gunderson are from Minneapolis.

Country-inspired, garage, post-punk music group Daisy Chains is the sweet, warm and down-to-earth band when it came to answering my questions. “I like the softness and feminine of the name ‘Daisy.’ Daisy is also a name from my favorite salsa jar” Beth described the band name excitedly. “We love being on the road, doing live show” the three of them agreed, and they enjoy the tension on the stage.

Before the headliner, Daisy Chain played, The Savage Young Taterbug was the first band that started out. When they were playing tunes on the stage, a crowd of people suddenly came closer to the stage, and stood in front of my table. I figured if you want to have a good view of the band, you could only stand between the tables and bar.

The Savage Young Taterbug has a guitar, cello, and electronic keyboard.

They had a soft, thick country-mixed rock feeling. The addition of the cello gradually built up the atmosphere that impressed me a lot. “We got a beautiful feeling, whisper, stash to my baby” got stuck in my head. The third song “The Paperstud” was my favorite song from them. But the keyboard did not play it smoothly in the beginning. The audience laughed a little and waited for them to keep it back on. The sound of the keyboard is liked raindrops falling to compose a beautiful, sad folk rhythm. The Audience seemed enjoyed their performances.

After a short wait, Gem Jones came on the stage with their basses. The main vocalist wore a polka dot shirt with his flamboyant blonde hair: I think they had a good fashion taste.

Their song has the Lo-fi garage rock or punk rock feeling of which I am not a fan. It is fuzzy and loud, and the lyrics were not what they wanted us to listen to, but the beat was awesome. After hearing one song, I felt I lost my hearing a little. I tried to stand in the second row to follow the crowd; I saw people in the first row were moving their heads following their music.

Finally, around 11 pm, the central part of tonight, Daisy Chains, began to set up. Some of the people in the front were gone, and other audiences went to have a seat near the bar. They started with two songs, not on their album. At first, the drum part overpowered Beth’s vocals; later her voice became powerful, but softer at the same time. When the second song “Don’t tell me” played, people started to lean toward the stage. I loved Beth’s voice so much; it is versatile, and she conveyed the bitterness of the lyrics. The ending part featured a radical drum solo that stood out.

The third and fourth song were from their album “Above Abroad.” “Slack Jawed” featured some jumpy bass chords. Between the chords, Beth sang, “let go” and yelled it out. There was a feeling of leaving the ungrateful people. In the middle of the song, Beth paused and softly  thanked the chillness that Walker (drummer) brought, which differed from how she sang on the stage.

I liked their song “Bye Babe” the most. The Bass lead the song. Beth’s voice was emotional when singing “my babe.” It rose and fell and made you want to hear more songs like this. The last song was “Your Heart Out” by the Fall. They added a guitar that added a more smooth feeling.

They ended the show with more and more people coming to the front. When they wrapped up, some people came and asked if they could buy an album from them. I felt the time passed relatively fast and I wanted to hear more from their lyrical songs and sink in the atmosphere again. Their music speaks for them. I wish they would release an LP and maybe record a video so that people who cannot see their live performance can hear it.