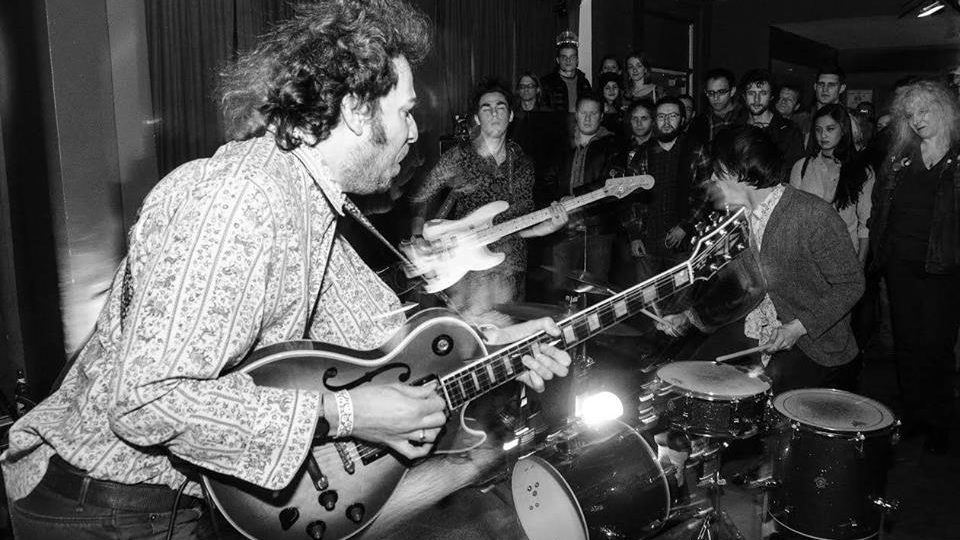 As I made my way downtown, I could tell it was Mission Creek season. Rounding the corner onto Washington street, I saw a small crowd gathered outside of the Englert Theatre, waiting to get inside and see the Joy Formidable. There are always so many events going on downtown during this festival, and the streets were lined with people; a scene reminiscent of early fall in Iowa City, when football season is in full blast.

I arrived at the Yacht Club far too early, as I descended into a strangely lit and smoky basement. There was an arrangement of pale yellow light bulbs along the walls and ceiling that I had never before seen in all my nights spent in that cavern. It was part of the show; a light specialist was present (who apparently has programmed lights for Prince!). The room was mostly empty, and a few poets were gathered around a table. On my way in, I recognized a few members of Yonatan Gat hanging around their van and hauling gear into the venue.

Tonight’s show was an exciting mixture of music and poetry. The event celebrated the 10th anniversary of Black Ocean, a press who printed the works of poets Zachary Schomburg and Kelly Schirmann, and soon too include Anais Duplan, the first poet to read tonight.

Janaka Stucky, the man behind Black Ocean, was first to approach the mic.

“How’s everyone doing tonight?” was met with a few claps.

“I’m not gonna start the show with that kind of response. We have writers from all over here tonight!” Before he could fully finish his statement the cheering had picked up and drowned him out. The sparse crowd approached the front of the stage, gathering around (some sitting, some standing) in anticipation for Anais to read.

Anais was the type of person that emanated originality. Although she started by reading someone else’s poem, she used it as a jumping off point to dive into her own beautifully dark version of history. Her poems were bursting at the seams; her voice was commanding and poetic, but always felt as if she was holding something back from us, something she has known forever, but something we won’t ever know. She read two new poems first, then a few from her book. She has a book coming out in 2018 with Black Ocean. Janaka referred to her as “The Ghost of Black Ocean Future”.

Her work was at some points academic and rife with historical references, but at other points inventive both in language and in imagery, something that is sort of a trend with the work put out through this press. She finished her last poem with a relaxed “Cool. I’ll stop there,” before the next poet took the stage.

The next poet was Kelly Schirmann, whose first book with Black Ocean is coming out soon. They had copies for sale, though, along with the books of a few other poets involved. The poems she read were very revealing. They felt raw, naked, coming at you in a no-bullshit way along with a pleasant musical grace. She writes the type of poem you always feel was “written just for you,” giving you a feeling much like that of hearing your favorite song from childhood. Although her work is strangely relatable, she also had a very unique voicing in her poems.

Throughout her reading, the guitarist from Yonatan Gat was walking around the back of the crowd, tenderly plucking some strings on his unplugged guitar. I guess it added texture.

The last line she read had to be written down in my notebook immediately: “I love you so entirely, I forget how to talk.” But writing it in my notebook couldn’t replicate the way she said it. It was just one honest, suspended moment–then it was gone.

Kelly is also the founder of Black Cake Records, a web-based label that mixes music and poetry. “All of the music is free, and Zachary even has an album up on there,” said Kelly. “Mixing music and poetry really amplifies whatever emotion is present. It makes it more enjoyable for everybody,” said Zachary Schomburg, when I asked him about the intersections of music and poetry. “There are new waves of art always coming.”

The last poet to read was Zachary Schomburg. Zach was the only poet whose work I was familiar with before coming to the event tonight. He didn’t bring any of his books with him, the ones that I had read, but rather read one from memory and a few from what appeared to be his phone. As I expected, it was a great reading. I had always considered his work in some ways very dark. Ask anyone who knows his poems, and they’ll tell you about his mind-bendingly surreal imagery and dark humor. He brought that dark humor to the stage tonight, even asking the crowd if the Yacht Club was actually an “easy bake oven.” His poems are filled with endlessly creative imagery and wit.

I asked Zachary, after the show, how he used such strange images to convey how he was feeling. “Scary, No Scary (a book of his on Black Ocean) was written at a very dark time for me. I can hardly read those poems at readings.” He explained to me the process in which a poets can discover themselves through organic writing, while also creating engaging art for others.

Once the poets were all finished, Yonatan Gat began to set up. They were visible the whole night; the way they dressed and carried themselves gave off the travelling musician vibe. They walked around the venue for a bit, reforming the shape of the table-and-chair setup to better suit their needs. Yonatan Gat makes a point to play on the floor of venues, with the crowd surrounding them, as opposed to getting up on stage and removing yourself from the audience.  This made for a strikingly intimate performance.

As they were setting up their almost-drumset (it consisted of a floor tom, snare, bass drum, and a singular ride cymbal) and warming up the tubes in their amps, the members were also turning off every single light bulb, one by one, along with stage lights, back lights, and anything that emitted light. This made it rather difficult for me to take notes, so I put my note book away and enjoyed the show up front.

Each band member had a light fixture pointed at them: red for the guitar player, a pale blue for bass, and green for the drummer. As each band member entered or exited a song, they would turn their light on or off in quick succession. It was a really awesome idea and it definitely added to the set.

The show was just what I expected. The songs were at times jazzy and sparse, until the next moment when we were thrown into a whirlwind of thrash-punk. The absolute speed never faltered, though the mood would. The drummer was playing so hard and so fast that his perspiration was thrown around the set area. I even think the closest six audience members got sweaty just watching him.

Yonatan Gat’s music often escapes words, which is why I found it so fascinating that it was paired with such wonderful wordsmith action by some very talented poets. The music had that sort of pseudo-rhythm we hear in some poetry, and I couldn’t help wondering what it would sound like with poetry spoken over it. I asked Kelly about reading over music, which is the type of music her label consists of: “Before I got here I was like ‘Yeah, I’m definitely gonna ask the guitar player if he’ll play behind me while I read!’ I guess I just changed my mind.” Oh, the ache of what could have been.

After Yonatan Gat, a DJ closed out the night. A few people were gathered around a Mac Book, dancing with the poets and musicians who had so gracefully curated an amazing night of words and sound. While packing my things up, Anais caught my eye and said “What, no dancing?” before smiling and running off into the crowd. And that’s how I ended up dancing awkwardly next to some poets I truly admire.

You can check out Yonatan Gat’s music below, in the Spotify playlist, or get it straight from their website. Also, I would suggest browsing the collection of works for sale over at Black Ocean.