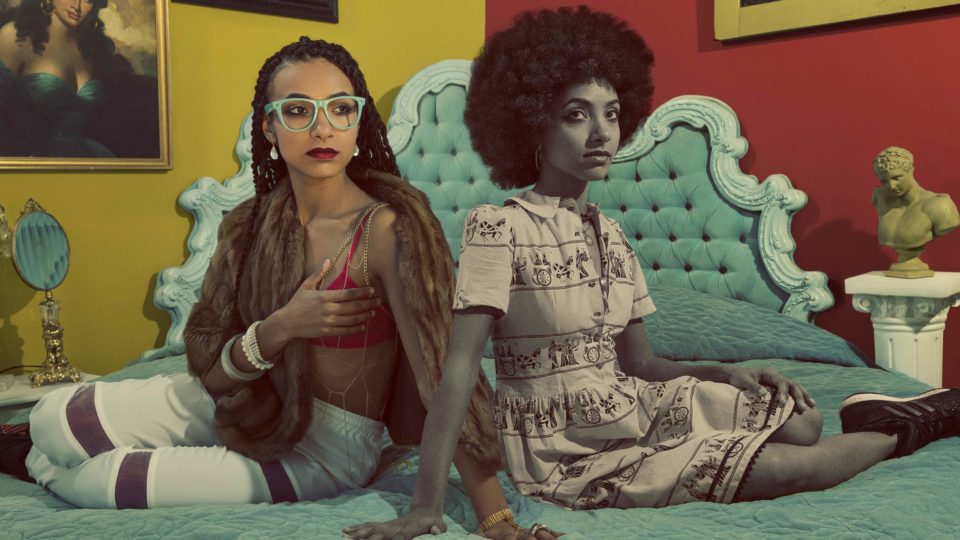 Esperanza Spalding has been praised for her creative freedom and technical abilities in the jazz world. She maintains this beauty in her art by coupling music with politics and serious issues that resonate with her listeners. I clearly have a super crush on her. For more background on her as a musician, read my article in my bimonthly column “Decolonize Your Mind.”

In an interview with NPR, Spalding discussed the ideas behind her newest creation “Emily’s D+Evolution.” As a child, she was Emily to many people, and this connection to her youth fuels the music on this album. “Emily is exploring these … means of expression that I was curious about as a kid … that I never pursued or developed.” She spent much of her younger years as a musician perfecting her technical abilities and learning the specific details about her music and instruments, and now she has incorporated things like acting, dancing, costumes, and other creative outlets into her newest album.

The first track, “Good Lava,” shocks listeners as different from Spalding’s previous work. Incorporating rock styles into the song, the impure guitar riff and the free vocals paired with tight background vocals creates an interesting dynamic of messiness and clarity.

Her inspiration behind the song came from a story her mother told her about tapping into the potential of troubled students, and finding a “boiling and burbling” energy in all of us that yearns to be free in a powerful release. I LOVE THIS ALREADY.

“Unconditional Love” is a slower, more relaxed song that complains of the emptiness of cliche love stories and how relationships often consist of just going through the same motions until the inevitable breakups. However, Spalding (or rather, Emily), proposes that we “change the whole story of love” and stop acting out predictable roles. It’s a sweet song that already provides a stark contrast to the first song of the album.

The next song, “Judas,” reflects some possibly unpopular opinions in her lyrics, where she sympathizes with Judas and other marginalized people society may deem as criminals or sinners. In her verses, she uses an intriguing talking-singing-rapping style to tell stories of people who have been forced into unfortunate circumstances by other peoples. This becomes clear when she sings “forgive this innocent wrecking ball” and the background vocals sing “man-made.”

I honestly have no idea what “Earth to Heaven” is about. You all can make your own theories by reading the lyrics, but I really enjoy the irregular rhythms and strange background vocals.

“One” has my favorite chorus of the entire album. Each chorus sounds like the climax in a power ballad; with the powerful background vocals, epic drum and guitar riffs, it’s all so great. At this point in the album, I don’t feel like Esperanza/Emily is repeating styles and every song brings something new for the album.

Although she used her childhood name and attitude for inspiration, “Rest in Pleasure” is a super sexy song. The background vocals and chorus sound like a person making pretty sensual noises, and the rest is pretty easy to deduce from the lyrics “Now what are we gonna do/With our two fiery souls?”

I think “Ebony & Ivy” might be my favorite song that she has ever created. Her smooth vocals paired with gritty guitar riffs, and the SUPER political nature of the song just makes magic. The song title refers to a book published recently about the entangled nature of the remnants of slavery and academia/higher education. Spalding and her background singers open the song by quickly speaking in unison about how universities were built on slavery and anti-blackness and it’s amazing and powerful.

At this point, I’m wondering how the album can get any better after the past few songs. However, as she always does, Spalding brings unique, dissonant melodies to the next song “Noble Nobles.” Emily returns with her powerful political music and criticizes the contradictory nature of historical figures and their beliefs. “Talking founding fathers with a free philosophy/That don’t mention me” refers to the empty words the Founding Fathers wrote about all people deserving freedom, but leaving out all women and all people of color.

She reflects the contradictions musically when her background vocals sing a beautiful harmony, but end the musical phrase with a dissonant combination of notes, just like her lyrics “Noble nobles with a savage means.”

I’m not sure who the subject of “Farewell Dolly” is, but again, Emily discusses historical injustices and seems to refer to how women had no property or wealth unless they became widows, and how men did not care for their rights. Always using her platform to be badass and political.

“Elevate or Operate” is pretty weird. The song begins with a childish, circus-like theme and then transforms into a volatile conversation between two people. The lyrics may help you more than they helped me understand the song.

The penultimate song, “Funk the Fear” is basically a message to listeners to carpe the hell out of that diem. It’s a pretty great song, and I kind of wished she made it the last song of the album until I heard her choice.

“I Want it Now” is definitely a tribute to the lovable, humble, Veruca Salt from “Willy Wonka and the Chocolate Factory” by Roald Dahl. This relates to her childhood inspiration for the entire album, but somehow she makes it sound a lot better than the little brat in the book.

By now you’ve realized I’m a little impartial to everything that Spalding creates, and by that I mean I love her. However, the album is seriously really good. She creates a balance of political songs with fun, lighthearted music and the artwork is beautiful. Listen below, and check out her website for more information!