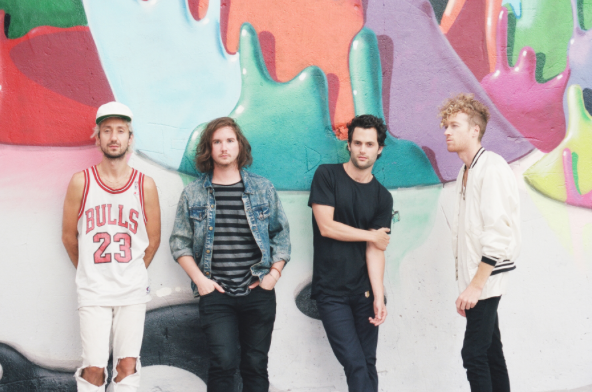 A new Indie band is stepping out onto the scene, and the lead vocalist is… a Gossip Girl star? Understandably hesitant, I delved into MOTHXR’s debut album Centerfold, my expectations low and wary. But I was soon pleasantly surprised to learn that this Brooklyn-based four-piece holds their own, stronger than first predicted. Bringing a chilled out electronic vibe to their self-proclaimed indie label, MOTHXR provides a solid first release for fans of a satisfactory beat and overall bearably groovy club tunes.

Penn Badgley (known for his role as Dan Humphrey in six seasons of The CW’s Gossip Girl) teamed up with three others: Darren Will (bassist), Simon Oscroft (guitarist), and neighborhood friend Jimmy Giannopoulos (producer) to form MOTHXR. The band recorded their first album in several cities such as Los Angeles, Chicago, and New York before releasing it on February 26th of this year.

Centerfold contains a rather monotonous set of songs, bearing minimal lyrics and long drawn-out instrumental sequences. Somehow, though, it keeps itself interesting with subtle interjections of guitar riffs (such as in “Wild Ride,” “Impossible,” “Touch,” and “Underground”) that bring the indie touch.

For the most part, the album keeps at a steady electronic-production-based pace, reminiscent of something an exclusive nightclub might spin. There’s something satisfying about the predictability that comes with each track.

While some songs like “Touch” and “Fight The Feeling” are a tad longer than feel natural, the elongated mixes are what give the album that continuous DJ feel. Along with that, the catchiness is prominent throughout. Badgley deems himself worthy as a reliable vocalist in tracks like “Easy” and “She Can’t Tell,” lingering in falsetto and blending well vocally with the desired vibe of the songs.

The opening track “Impossible” prepares listeners of what’s to come. It’s not until the second, and potentially most catchy, track “Stranger” where the beat picks up and feels like something you could catch yourself grooving to.

Misplaced sounds are moments when the album feels derailed, such as the saxophone in “Victim,” along with heavy-handed electric elements and displaced voices in “I Can See You’ll Never Make It Out”.

Luckily for MOTHXR, they are relatively aware of the balance between outlandish club noise and innovative, catchy beats. The title track “Centerfold” is one that captures this well. While I approached this album with a fair amount of scrutiny, I walked away with a better sense of Penn Badgley’s musical abilities as an artist—something I never thought I would admit that I quite enjoyed.

Like what you hear? Check to see if MOTHXR is coming to a city near you on tour this spring.