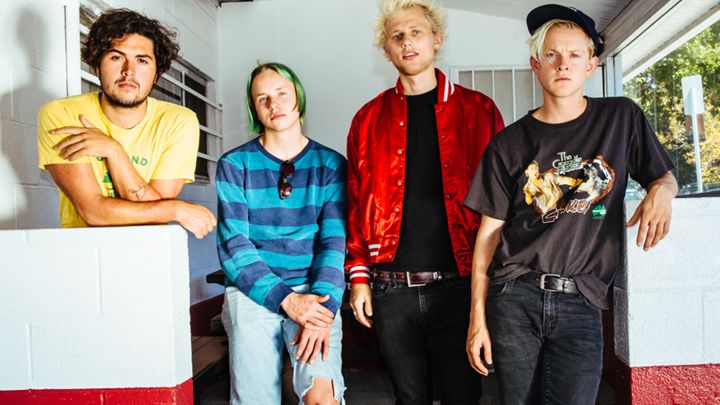 Hailing from Oakland, CA, SWMRS is a punk/surf- rock quartet consisting of brothers Cole and Max Becker, Sebastian Mueller, and Joey Armstrong (yes, Armstrong as in Billie Joe of Green Day, but let’s focus on SWMRS shall we?). Formed in 2004 by Joey and Cole after they were inspired by Jack Black’s School of Rock movie, SWMRS (pronounced “Swimmers”) has played under a few different names, including the previous Emily’s Army, which was in honor of the Becker brothers’ cousin Emily who was diagnosed with Cystic Fibrosis.

Now in their current form, SWMRS released Drive North, produced by Zac Carper of FIDLAR, on February 12 of this year. Despite the band members being born in the 90’s, the album is everything a fantastic 90’s punk-rock album should be: full of angry, cheeky lyrics, aggressive guitars, girls (Hannah and Miley, to be exact), drugs and alcohol. Mixed with a modern production, SWMRS has gifted all those suffering from nineties nostalgia with the perfect 2016 cure.

Drive North hits the ground running with a fantastic ten-second guitar intro to the opening track, “Harry Dean.” Paired with punk-rock roars, “Harry Dean” sets the high-energy vibe for the 12-track album, and raises your heart rate along with your interest. Their mission statement for the album seems to be wrapped up in the lyric, “I want to kick some ass, I want to take some names.”

The next track “BRB” keeps the similar pace from “Harry Dean,” but there’s a bit of a softer build up to explosive chorus. I’m going to admit that I can’t completely parse out the all the lyrics in this track, but it’s extremely catchy nonetheless.

Next up is one of my personal favorites off the album, “Miss Yer Kiss.” The tone on this track is completely different from its heavier predecessors and it flirts a bit more with quirky production. “You’re goth and glam, I hope it’s not a one night stand/ but I am so cold and you keep me warm, yeah.” This song is fun and bubbly, and would be borderline cutesy, if it weren’t for the “I miss your tits” line to pull you back into the rock sphere. I could definitely see “Miss Yer Kiss” making it big as a summer jam. (Fingers-crossed.)

“Turn Up” is another bubbly track with a little more innocence than “Miss Yer Kiss” (aka no tits mention). “It’s getting late and don’t you hate it how the clock moves fast when your heart’s been racing?” I could also see this track as a fantastic summer jam, the hook is extremely catchy and the lyrics are really fun.

“Figuring It Out” knocks it out of the park with capturing that post-high school “what am I doing?” feeling and I definitely could see this track bringing down the house during a live performance. It’s fun and unapologetically self-aware with killer fist-pumping instrumentals to back it up. I dare you to listen to this and not want to jump around. Go ahead, I double dog dare you.

With “Ruining My Pretending” and “Uncool,” SWMRS switches their sound up two songs in a row and really demonstrates how versatile they are as a band. I feel like some punk-rock bands can easily fall into a rut and their album ends up blending together, but SWMRS has done a fantastic job of putting together a cohesively eclectic track list that strays far from boredom.

If you would have told me Miley Cyrus is a punk-rock queen previous to listening to Drive North, I probably would have given you a very strong side-eye and laughed a bit at your expense, but after listening to “Miley,” SWMRS might just have me convinced. “Miley what’s your next move gonna be?/ Miley something unexpected that nobody will foresee / know that even if it’s punk rock or if it’s getting drunk rock, Miley you’re a punk rock queen.” If the lyrics aren’t enough to get you hooked, the chorus is supercharged with guitars and head-banging capabilities.

“My bedroom walls are feeling more like prison for shallow sleep and bloodshot eyes/ Someone save me from these sad, sad poems” The ninth track of the album, “D’You Have A Car?” is explicitly that—asking if you have a car so you guys can just drive around for a bit. Up next is the second lovely lady of the album, “Hannah,” and is similar in sound to “Miss Yer Kiss,” which probably explains why it’s another one of my favorites off of Drive North. It has a slower, trippy, underwater vibe and the lyrics are pretty fun. “Math class kills me/ Weed makes me silly/I like good music/ Don’t you want to love me?”

“Silver Bullet” brings back the more traditional guitar and drums instrumentals to begin closing out the album. The track is pretty even keeled, sound-wise and once again the lyrics keep your attention. “Midnight strikes we’re on our own watching our t.v./ The moon is full, our clothes come off/ Blame it on biology/ The man from New York City said he’s gonna make us huge/ But it’s rigged for fun, yeah a loaded gun/ Darling what’s the use?” Got to love that werewolf imagery.

The last track of Drive North, as well as the title track, closes the album with the same explosive good-natured aggressiveness “Harry Dean” opened the album with. “Drive North” is a very strongly-worded hate letter to Los Angeles and a proclamation as to why SWMRS want to “drive north.” “I hate Santa Monica Boulevard/ I hate Venice Beach/ I hate Tarzana, too/ Cause I hate Los Angeles.” “Drive North” closes the album with a good hearty “f*** you!” as its parting words which is a pretty fantastic wrap up to this expertly executed punk-rock album.

Check out Drive North for yourself below and be sure to visit their Twitter and Tumblr for tour updates!