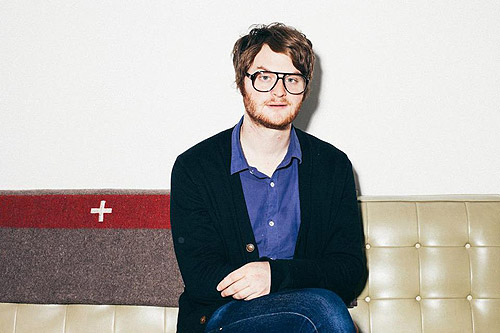 Telekinesis is one of the artist names of synth pop revivalist Michael Benjamin Lerner. Lerner released his fourth full length album under this name on September 18, 2015, entitled Ad Infinitum.

Ad Infinitum lays down an easy, electronically-inspired baseline within each track in order to layer melodies creatively from this central point. The record is a glimpse into the past, bringing back the vibes of 1980s synth pop.

The first track of the record is titled “Falling (In Dreams),” and is a perfect example of the aforementioned cool baseline as the standard for the album. This track has a relatively slow-going and drawn out beginning, but builds in intensity as it continues. It does not shine in comparison to other tracks on the album, yet is a decent choice to kick off the record.

The following track, “Sylvia,” picks up the pace a bit more than the opening song and has an overall stronger drive. The lyrics are not particularly stunning, but “Sylvia” offers an interesting, almost video game-like vibe to make up for it.

“In a Future World,” the third song of Ad Infinitum, is a clear winner on the album. It begins with a gentle synth beat and continues into a laid-back, yet driving rhythm. This is movie music– this is a song that should be played when a badass posse is walking down the street. This song is the perfect combination of upbeat and lazy– it shouldn’t make sense, but it does.

“Courtesy Phone” is the fourth track of Ad Infinitum. This track gets going straight from the opening note. The most enjoyable aspect is the strong electric guitar that interludes with the vocals. Vocal aspects in this track are stronger than in others, leading to a more successful track overall.

The fifth track, “Sleep In,” definitely has the most interesting opening musical phrase of the album. It begins with a low synth beat that adds eventual layers. These layers include backup singing that sounds like a child, as well as radio noise and a driving snare drum. It seems like these pieces shouldn’t fit together, but Lerner somehow makes it all flow into one unified track that is thoroughly enjoyable.

“Edgewood” brings back the video game quality of “Sylvia” as the sixth track. The quick synth hits give the song an unreal characteristic. The vocals in the beginning of this song are a bit off, but the beat is so strong and the guitar melodies really drive the track. The close of “Edgewood” enters into a slow breathy interlude, which doesn’t quite fit in.

“Its Not Yr Fault” is the seventh track of the album. First of all, I would like to say that I do not appreciate Lerner’s abbreviation of “your” in the song title. Perhaps he did not know which version of “you(‘)r(e)’ to use, or perhaps this is some artistic statement that I’m not catching. Regardless, “It’s Not Yr Fault” has the same driving synth, but is lackluster compared to earlier tracks.

“Farmers Road” begins with a dramatic piano-driven opening line and subdued vocals. This adds a nice amount of variety to the album that I really enjoyed. The electronic qualities of the track shine through at about the one minute mark, which gives the track enough cohesiveness with the rest of the album to include it. Though this song didn’t have the upbeat qualities of previous tracks, it’s quiet organization and thoughtfulness towards blending really made it shine out on the record.

“Ad Infinitum Pt. 1” is an entirely non-vocal track that shows Lerner’s knowledge of composition and organization of sound. Though there is no singing, there is a clear crescendo in intensity near the center of the track and an equally clear decline in excitement towards the end. “Pt. I” is short, yet an excellent display of talent and skill.

“Ad Infinitum Pt. 2” is hands-down the best track on this album. It is the most obvious choice for finishing this record and leaves the listener spellbound. It isn’t upbeat, yet drives on, and is held together by clear and clean piano chords that evolve into Lerner’s familiar synth. This song is a combination of all of the experimental elements of the rest of the album– processions of layering, central baselines, breathy vocals, and a brilliant guitar melody. You’ve convinced me, Michael Benjamin Lerner.

Ad Infinitum as a cohesive record could be described as an inventive new take on an old style. Telekinesis brings back the synth pop vibes of the 80s and combines them with interesting new ideas to blend not only time periods, but musical genres. While vocals were sketchy at times, and some of the same synth rhythms were overused, this album was successful in its experimentation with style and artistic creativity.