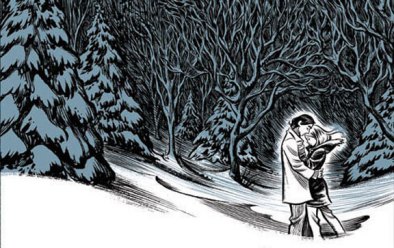 Midwestern winters are a force to be reckoned with. Even as Indian summer days populate the autumns of this area of the United States, it is still possible to catch a crisp breeze in the evenings, and the continuous approach of earlier sunsets remind us that soon enough the coldest season of the year will be upon us. Snowstorms, congested roads and sidewalks, and electric blackouts are common and expected. It’s a time to stay indoors, which can lead to feelings of entrapment and lack of energy.

However, these harsh winters bring about some of the most intimate opportunities between a family, friends, or a couple: long days inside baking for the holidays, marshmallows floating in hot chocolate, the ever appealing escape of a movie marathon while being cocooned in a pile of blankets.

“Blankets”, a graphic novel by Craig Thomson, perfectly captures the harsh but surprising compassion present in Midwestern winters. An autobiographical tale interlaced with artistic license, “Blankets” chronicles the author’s life from childhood to young adulthood, with the setting of brutal Wisconsin winters as the backdrop to our narrator’s coming-of-age.

Rife with symbolism, metaphor, and allegory, the graphic novel explores concepts of child abuse, Catholic guilt, the consequences of familial estrangement, ambivalence toward one’s search for meaning in art, and the defining of personal spirituality.

The earlier chapters of “Blankets” can be harrowing and devastating, illustrating the struggles of a young man becoming increasingly unsure in himself, the religion he initially leaned upon, and fitting in at school.

Thompson bookends his graphic novel with an adult version of himself reflecting on those earlier years and ultimately coming to his own conclusions about God and the church (he used the project to come out as a non-Christian to his parents in real life). It’s thoughtful rumination filtered through the perspective of a very talented artist.

Despite the strengths of the introduction and the conclusion of “Blankets,” however, the body of the novel belongs to the relationship that blossoms between Craig and his love interest, Raina. Tender, poignant, and ultimately heart-breaking, Craig and Raina’s courtship is realized beautifully and vividly, capturing the bitterness and the warmth that define so many people’s experiences with Midwestern winters. I don’t want to spoil anything about their lovely tale, so I’ll say this: it reminded me of my own experiences with falling in love for the first time, for better or for worse.

The impact of “Blankets” is largely attributed to its art. While its writing is articulate and deeply felt (the graphic novel isn’t exposition heavy, and easily weaves its characters and overarching themes together), Thompson’s evocative black and white art is simply breathtaking. Surreal scenes involving stars and angels and kaleidoscopic imagery make the emotionally intimate scenes hit even harder than they already do, and his use of negative space is alternatively suffocating and liberating as the pages flew by.

Even twelve years after its release, “Blankets” is required reading for anyone who enjoys a good comic (or are fatigued by the medium being dominated by ass-kicking superheroes), a touching love story, or are looking for a great narrative to curl up with once the snow starts falling outside.

Mix up some hot chocolate, turn on the fireplace, and grab a couple blankets, including this one.