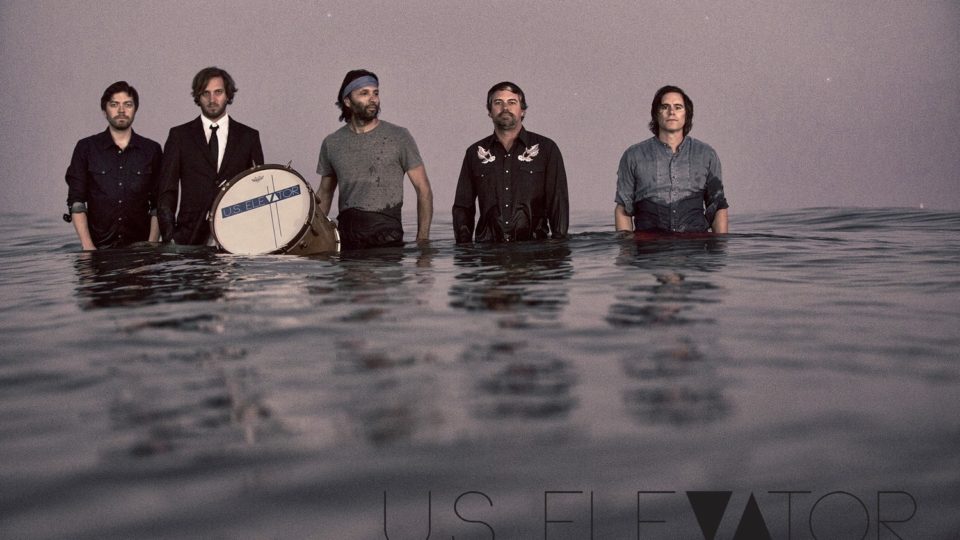 U.S. Elevator is a new band from Santa Barbara, California. Their first, self-titled album was digitally released November 3, 2015 and will be available in stores on December 11, 2015.  Their sound alludes to the sixties and seventies rock scene, including nods to The Beatles, Neil Young, and Gram Parsons.

The band was put together by Johnny Irion, who has previously released five folk albums with his wife Sarah Lee Guthrie. Irion got together a group of fellow musicians, and his producer friend Tim Bluhm, to create a “rocking alter-ego.” Other band members include Nate Modisette (bass), Erich Riedl (drums), Anders Bergstrom (guitar), and Brett Long (piano). The group meshed well from the beginning, and despite most of them having day jobs, decided to form a new band.

U.S. Elevator recorded their album live without headphones “until [they] got the right take.” A friend of Irion’s recorded them in a Santa Barbara cabin with a 1,000-pound 24-track Studer A-80 tape machine, which apparently is pretty vintage and awesome. The album has a very authentic, original feel.

1./11. Pierre Lafond/Pierre Lafond Re-Mix
The album is framed by Pierre Lafond and Pierre Lafond Re-Mix. I appreciate a good intro/outro as much as the next person. Unfortunately, this approach only works if one listens to the album from the beginning to the end. They are both instrumentals, which allow the listener to “get in the zone” as well as get ready to return to the real world when the album ends. I like the creative idea, but I’m afraid most people who listen to the album will not get the full effect because of shuffled playlists.

2. Can I Make it Up To You?
Call and response from the lead singer to the other band members is a classic ’60s-’70s rock technique. Right away, I am attracted by the mellow groove created with ease. It’s certainly easy to picture a group guys sitting around a house jamming out.

3. Community Service
There must be a story behind this song; the fun vibe makes me wish I knew it. However, the lyrics are superior to the music for this song. The pulsating, simple chord progression is not especially inventive.

4. Cry For Help
For this one, I actually prefer the music more than the vocals. The repeated guitar riff is catchy and well-supported by the rhythm section. The singer’s cry for help is slightly whiny, which is not apparent in most of the other songs.

5. Dangerous Love
Dangerous Love was the first single released, and I think that was a great choice. The song encompasses everything good about the band: solid music, smart lyrics, and a clear sixties/seventies feel. We all know the many ways that love can be dangerous. This song describes the conflict between taking risks and being cautious with a loved one.

6. Momma-Cito Blues
Momma-Cito Blues is similar to Cry For Help, but is slightly more interesting. There is reference to Santa Barbara Babes, which helps establish the band’s natural setting. Near the end, there is a unique, spontaneous wailing from Johnny that I wouldn’t expect him to be able to replicate. Momma-Cito Blues also fades out completely with about 30 seconds left and then comes back in with an instrumental encore. Strange, but I like it.

7. Where the Rubber Meets the Road
As the title implies, Where the Rubber Meets the Road is a good song for cruising along the highway. The parallel intervals of the guitar contrast nicely with the basic rock beat and supportive piano chords. The slight vibrato imperfections are beneficial to creating a meaningful vocal performance. There is a dreamlike feeling created by this song, like pondering memories from long ago.

8. Wall of Grief
Wall of Grief is my favorite song from the album. I can see it being applicable to any and all situations dealing with loss. Music helps us over, and under, and through the wall of grief. The band shows off their bluesy, soulful chops throughout the track. I can’t get enough of the harmonies or the guitar solo near the end.

9. Sleep Ain’t Nothin But Death’s Brother
Catchy title, eh? I thought so too. The premise of the song is clever, but I do not feel like they executed it very well. I think it was a case of coming up with a witty quip but not having enough of an idea to form a whole song. Instead of trying to make a well-rounded song, they repeated the chorus more times than necessary. There was also an especially twangy vibe which does not fit the rest of the album.