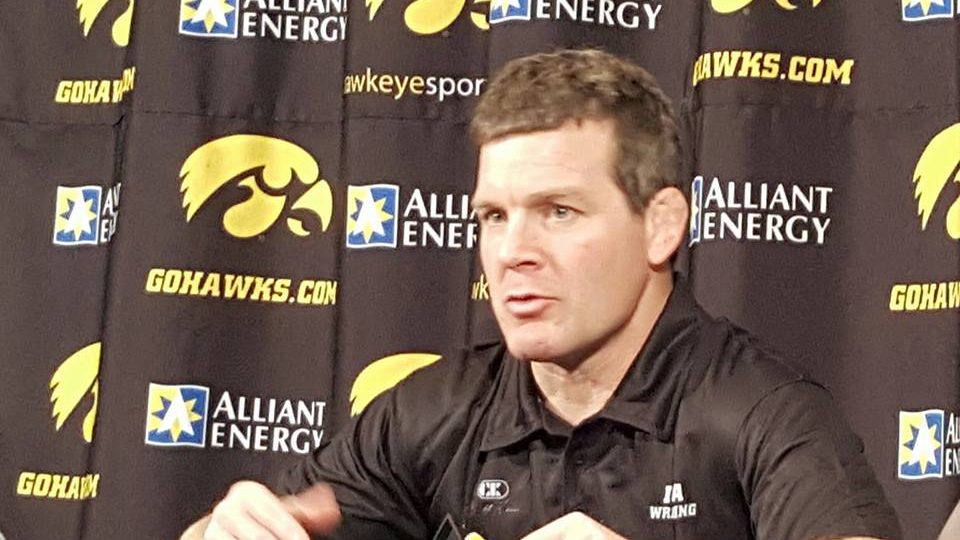 The #2 Iowa Hawkeyes won big in their first meet back inside Carver-Hawkeye. The combined score from all four duals was 192-9, but those 9 points that the Hawks surrendered exposed a few holes in their line-up.

All three losses for the Hawks on the day came at the hands of Iowa’s first Big Ten opponent of the season, Maryland. One of the biggest questions for Iowa since March has been how they were going to fill the shoes of their five graduating senior. The 174 lb vacancy and 285 lb vacancy both seem to have found fairly dominant fill-ins in Alex Meyer and Sam Stoll, however, 141, 157, and 165 still seem to lack a standout.

The Iowa City Duals today were supposed to be a way of sorting that out, but none of the three Hawks vying for a spot were able to have standout victories over their conference opponent, let alone victories at all. First, redshirt freshman Logan Ryan lost an 8-5 decision to Maryland’s Alfred Bannister after giving up three takedowns and a reversal. Then senior Edwin Cooper dropped a close 8-6 decision to #20 Lou Mascola, and finally, redshirt freshman Burke Paddock lost a 9-5 decision to true freshman Brendan Burnham.

The next three duals Iowa rotated its lineup around taking looks at different guys at those weight classes with Jake Kadel at 141, Skyler St. John at 157, and Patrick Rhodes at 165 against Grand Canyon in the next dual. Then against Iowa Central they returned to the line-up that was used against Maryland, and finally against Cornell College the Hawks switched back to the roster that faced Grand Canyon but with Ryan wrestling in place of Kadel.

Despite the couple of hiccups the Hawkeyes saw in their first dual, against Maryland, the remaining three went very smoothly and without blemish. Grand Canyon, a school in its third year transitioning to division I wrestling, put up the largest fight with the Hawks limiting them to only a 44 point shut-out.

The junir college #5 Iowa Central and division III #19 Cornell College were not maybe as competitive as they could have been either as the #1 ranked 141 and 2015 junior college national champion Jason Alfau did not wrestle for Iowa Central and neither did their other #1 ranked former champion at 184, Tyler Hoffman. Cornell also did not wrestle their division III #4 ranked Trevor Engle at 149.

The two other wrestlers ranked by Intermat in their line-ups did not last long though against Iowa’s division I All-Americans. Iowa Central’s #5 Ryne Cokeley lost by tech fall to Iowa #3 Brandon Sorensen at 149, and Cornell’s #7 Phillip Opelt was pinned in the first period by Iowa #2 Cory Clark at 133.

Even though there are a couple spots still in the Hawkeye line-up that do not have a clearly distinguised starter, the rest of the roster looked incredibly solid. In fact all of Iowa’s wrestlers looked solid when going against opponents other than Maryland as almost every single Hawkeye won all the rest of their matches with bonus points rather than by simple decision. This was highlighted when Iowa pinned all but one opponent against Cornell with all of the majority of those falls coming in the first period.

The Iowa Wrestling Team will see its next action on the 29th when it takes on in-state rival Iowa State in the latest installment of the CyHawk series.