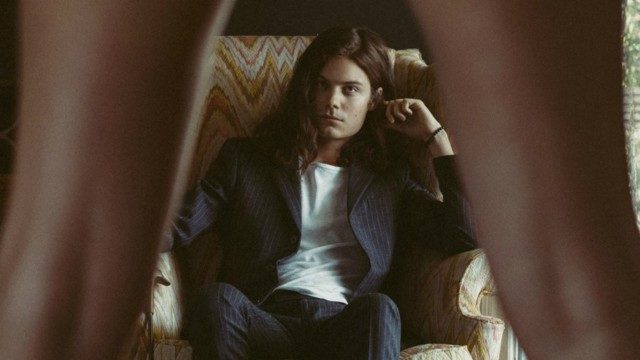 Released October 16th, 2015, Dopamine is Michigan native Garrett Borns’ first studio album. Dopamine explores the concept of “longing for like a chemical reaction with someone else” with fresh instrumentals and unique vocals. Below is my take on the eclectic and imaginative album.

Since Borns sings almost exclusively in falsetto, his tracks already have a dreamy, airy sound to them. But “Electric Love” is set apart by its great rock vibe that balances extremely well with the surreal vocals. Also, the lyrics are so obnoxiously, silly happy that I can’t not smile when I listen to it.

“Baby, you’re like lightening in a bottle/I can’t let you go now that I got it.”

“Candy, she’s like candy in my veins/Baby I’m dying for another taste.”

Very much the opposite of “Electric Love” – but just as amazing – is “Overnight Sensation.” First off, this song was inspired by an old copy of Playboy. According to Borns, he was specifically inspired by a black-and-white page featuring a young woman lounging on a couch with light streaming in through the window. Accompanying her on the page were the words “Overnight Sensation.” This led to Borns trying to capture the sexiness and thrill of looking back on a passionate night of love. The verdict? He did a great job. While the track has an easiness to it, it’s still compelling and makes you want to move your hips.

“The Emotion” was a great track because it provided a break from the “up up up, happy happy happy” vibe and took the album to a more focused and intense place. It’s a powerful, dark, middle-of-the-night anthem that screams, “I’m at my end and I need that freedom and release.” Borns was inspired by the “satanic” sound of coyotes laughing in the canyons late at night and ran with the darkness. Bravo.

“Dug My Heart” continues this theme of darkness with an amazing, unique bass line. The dreaminess is a little more played up in this track, but not too much that the seriousness is lost. A relatable track about losing love, “Dug My Heart” delivers a classic message in a new and exciting way.

“10,000 Emerald Pools” is the first track on the album and there’s no better place for it. The music video is filled with bubbles, sparkles, and dream-like sequences of two people swimming around underwater that completely capture the song’s concept, which is really an introduction into the concept of the whole album.

“Holy Ghost,” “Past Lives,” and “Dopamine” all tie directly into the concept of looking for a connection with someone else. “Holy Ghost” and “Past Lives” focus more on the person supplying that connection while “Dopamine” really hones in on the need for that thrill, that gut feeling when you know something’s right, that feeling of being alive. “Holy Ghost” is my favorite out of these three because it’s a sexier track about looking for that connection in the form of physical love. The track really hits you and travels through your bones.

“American Money,” “Fool,” and “Clouds,” were all good tracks, but they didn’t “pop” as much. “American Money” was another dark, sexy piece that didn’t bring anything new to the album. “Clouds” was funk and brought up a new sound, but it lagged horribly. The daydream effect was achieved without a doubt, but it felt like slow-motion, which was unpleasant to listen to. “Fool” failed for me along the same lines. The sound was different, but not good different.

Overall, the album was surprisingly enjoyable for me. I didn’t expect to like an artist who used such eclectic instrumentals but I was pleasantly surprised. BØRNS has definitely added a few new tracks to my favorites list and I’m excited to see where his work goes from here. Check out BØRNS’ full album below as well as on Spotify.