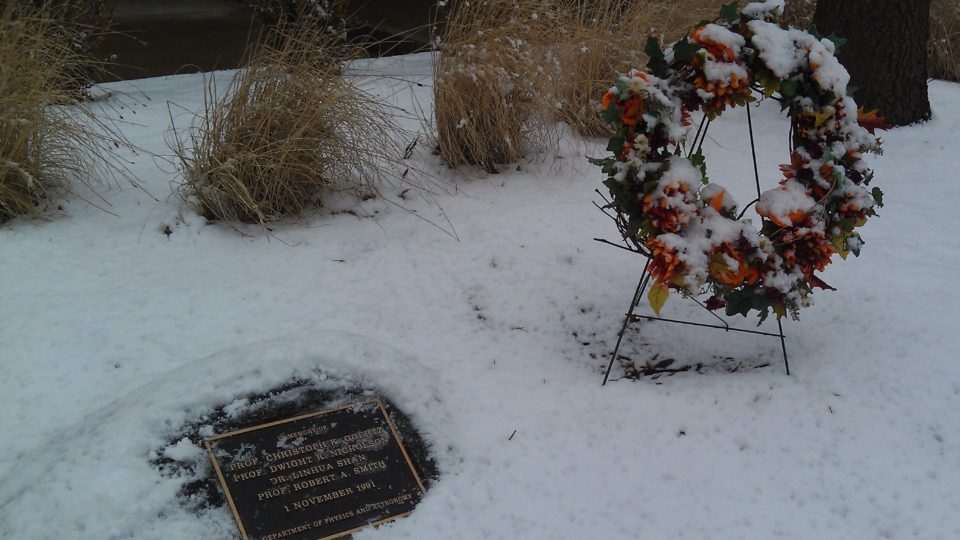 Hundreds of people pass through Van Allen Hall everyday, but only a few of them notice that a wreath and a stone tablet lie in front of the building. There are four names and a date on the tablet:

DEPARTMENT OF PHYSICS AND ASTRONOMY

24 Years Ago: An Incident that Shocked the Entire Nation

Long before the spree of school shootings, which most people believe was set off by the Columbine shooting in 1999, there was the University of Iowa shooting (Also known as the Gang Lu Incident) that killed six people, including three professors, a vice president of the university, a researcher, and the gunman himself; another student was paralyzed for life.

The gunman, Gang Lu, was an international student from China. He started the shooting spree because he was angry that he failed to get a reward of $2,500. On November 1st, 1991, Lu attended a conference on the third floor of the Van Allen Hall, and opened fire a few minutes later, killing three people in that room. He then went to the second floor to shoot the chairman of the department in his office. Lu moved to Jessup Hall on the Pentacrest, and killed T. Anne Cleary, the vice president of academic affairs and injured another student in that office. Lu was originally planning on killing the president of the University of Iowa at that time, Hunter Rawlings III, but failed to do so because president Hunter was not on campus at that time. Lu then went to room 203 in Jessup Hall and killed himself.

Many students know some details of the incident by knowing the origin of Cleary Walkway on campus, while others who were born in the Iowa City area heard about the incident from their parents or other relatives. Unlike most domestic students who see this incident as a simple campus shooting, most Chinese students who know about this incident focus more on the gunman’s ethnicity.

Things have changed in the past 24 years and generally speaking, if a mass shooting happens on campus now, we are much safer than 24 years ago. For example, Hawk Alert, a crime alert platform that was formed after the Gang Lu incident, can immediately alert us via texts and emails; and cell phones and social media make it easier to get the latest updates of the incident.

The things that happened 24 years ago may not be able to take place on today’s campus, as after Lu killed four people in Van Allen Hall, he wouldn’t have been able to walk three more blocks to continue his shooting spree.

What happened 24 years ago is a horrible tragedy. But we should not just let it be forgotten. Instead, we should tell people that such tragedy happened, and we are doing our best to prevent it from happening again.

What do you think? Please feel free to comment.