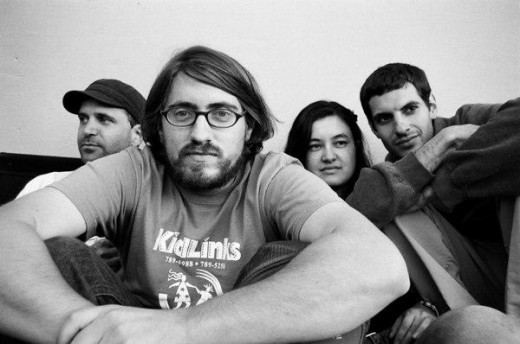 Origami Ghosts is a Seattle-based band that found life in 2005. Their third album, Fruit & Animal was surely anticipated in some circles. If one were to describe the sound of Origami Ghosts, it might be called an indie rock/folk mix-up.

Origami Ghosts proclaims on their Facebook page that they have occasionally been compared to iconic groups such as the Shins, Modest Mouse, and the Beach Boys.

Judging simply by Fruit & Animal, I am going to have to disagree with this presumptuous statement. While Origami Ghosts does at times hold the same happy-go-lucky vibe as the Beach Boys, it isn’t clean or polished. And while songs from Fruit & Animal such as “Tongue” might hold the same dramatic instrumentals as the Shins and Modest Mouse, their organization can’t really compare.

The most striking and cohesive element of the album as a whole is the layering—every song holds a juxtaposition of rhythms and phrases. At times this is enjoyable and interesting to listen to, but at others it can be overwhelming.

For example, in “Lick Your Paws… Henrietta” there is a clear melody intertwined with multiple countermelodies, but because of the subdued nature of the the countermelodies, the song remains easy to listen to. This directly contrasts with other songs on the album like “The Wheel,” which contains a flute, a wind chime, a trumpet, drums, echoing vocals, and honestly, who knows what else. There are many interesting instrumentals that really add to the album, such as the refreshingly brassy horn playing in “Seeing Elves” and “Watered Down, Planned Out,” but unfortunately, the intense layering at times distracts the listener from these enjoyable moments.

The lyrics of Fruit & Animal are nothing to be spoken of either. In many of the tracks, they appear nonsensical and too abstract for the ordinary person to draw meaning from. In the eighth track, “Dr. Friends,” the line, Last night I was talkin’ to my friends/ Talkin’ about doctors/ Yeah talkin’ about doctor friends, and lines with similar word choice appear repetitively. On an even more confusing note, this song contains a Chewbacca growl and the word “shimmy” whispered seductively. Other songs that contain mystifying lyrics include “Kangaroo Boxing,” “To Do List,” “Dolphins & Vultures,” and “Incubator.”

While much of Origami Ghosts’ new album Fruit & Animal is only something most would want to listen to occasionally, there are a few hits on the set. “Unicorn Horse Divorce” is the clearly shining star of the album. This track not only has an amusing and intriguing title, but holds a catchy beat and visible organization. The lyrics aren’t philosophical or especially meaningful, but they are fun and interesting.

“Gone Bananas!” demonstrates a flair for drama that the other tracks lack with an extremely memorable opening. The final track of the album, “Now Where Am I?” begins with a simple guitar/drum beat that is somehow both soothing and uplifting.

Though much of Fruit & Animal is merely subpar layering and nonsensical lyrics, a testament can be given to their innovation. Songs like “Love” and “Fond of Flying” demonstrate their experimentation with echoing vocals and interesting techniques of keeping rhythm. Specifically, in “Fond of Flying,” there is a verse in which the only time keeper is beat boxing.

It is impossible to say that Origami Ghosts is not original—their unique blend of sound gives them unmatched distinction. What this album may need is a serious consideration of what layering is useful, and what is not, as well as contemplation of organization. While I won’t give Fruit & Animal my recommendation, I do commend their ingenuity.