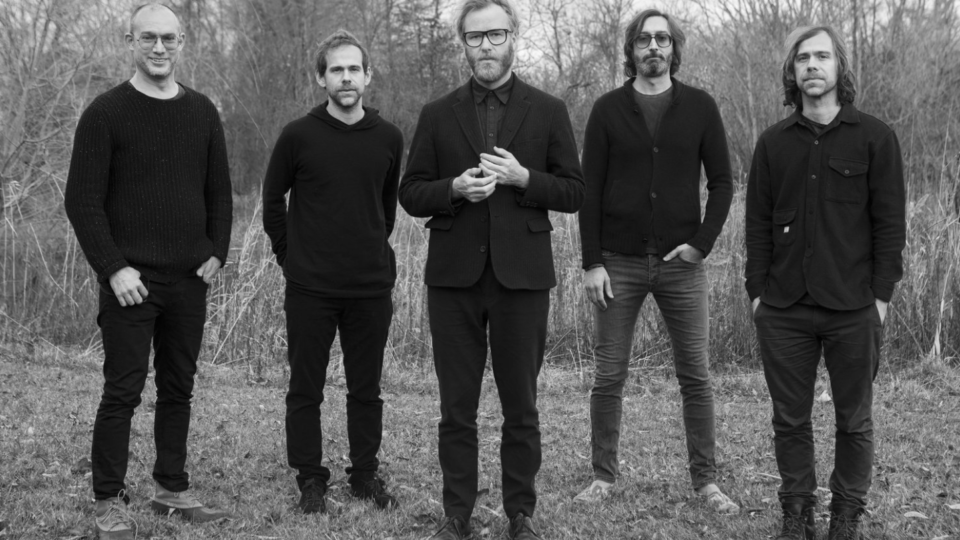 Matt Berninger of The National uses garage band to create music. Careful calculation over months of push and pull form the classic indie rock sound you’ve heard bursting through speakers of coffee shops around Iowa City since the late 90’s.

The National’s 7th album, Sleep Well Beast contains many of the band’s first’s; a guitar solo by Aaron Dessner on “The System Only Dreams in Total Darkness,” or the song “Turtleneck,” which Berninger explains to NPR is basically gibberish but with dark political connotation about President Donald Trump.

Electronic influences aren’t new to Sleep Well Beast, although it seems so to an audience. A bright citrus opening to the album playfully awakens this to the audience, with horse hove sounding synths while in the background, a melodramatic piano pattern carries the classic sounds we’ve been craving since their last release in 2013; Trouble Will Find Me.

“There’s some of it [electronic influence] on every record, really. You can hear beds of electronic stuff kind of rolling away in the background on the last album, on “Demons” and “Don’t Swallow the Cap” says Bryce Dessner, National guitarist and composer tells Joe Goggins.

Bursting choruses, bloody and brooding lyrics all bring together the perfect pace that Sleep Well Beast is. While still moody and dark, no doubt with help from Justin Vernon of Bon Iver, friend of Aaron Desser, there’s a new take on relationships, romantic and social, for this album.

“I’m not lost I’m not lost I’m losing grip the fabrics ripped” Berlinger grumbles in Sleep Well Beast, “let me figure it out, how to get us back to the place where we were when we first went out.”

“The [lyrics] are flexible, My marriage is in tact, but this is clearly a record about a relationship that’s over or maybe about to be over”  Berlinger tells NPR’s All Songs Considered with a chuckle. The album is centered on Berninger and his wife, Carin Besser, who co-wrote part of the album.

“We write about the things that are really really scare us the most, looking over the edge, and if you really look far enough over and address it and then come back and talk about what you saw and saying ‘I don’t want to take that step, I’m not going to do that’ that’s a healthy thing,” he tells NPR.

Sleep Well Beast isn’t an album that was put together with just chords and lyrics, it’s a socially aware active piece of art. The title of the album was born from the idea of Resignation Syndrome where, after being told they’re being deported from Sweden, hundreds of Syrian refugee children are falling into a comatose state for weeks at a time.

Berninger explains what part the election took in the album to Joe Goggins, “We had a bunch of songs that were actually quite political, but they just felt fundamentally lame and insignificant afterwards, so we dumped them. The political stuff that remains is just of a different tone.”

Aaron Dessner continues, “You can’t really separate your art from your personal experience, and everything that’s happening right now – you know, these are things that are going to affect our children.”

You can hear empathy, and the tug on Berninger’s patience in his voice through the entire album. It’s nothing that we don’t expect from the band, but it’s everything we needed to hear.

“The end of it’s a bunch of imagery from news footage that I saw, people like on forklifts..and you know native americans stopping the pipeline…and different stuff, its just fragments of imagery coming in and out at the end” Berninger tells NPR’s All Songs Considered.

“Also the sound of the record gets a little bit deconstructed and the pieces of the architecture of the song get kind of revealed at the end…it was a big…yeah we were smoking weed, man.”