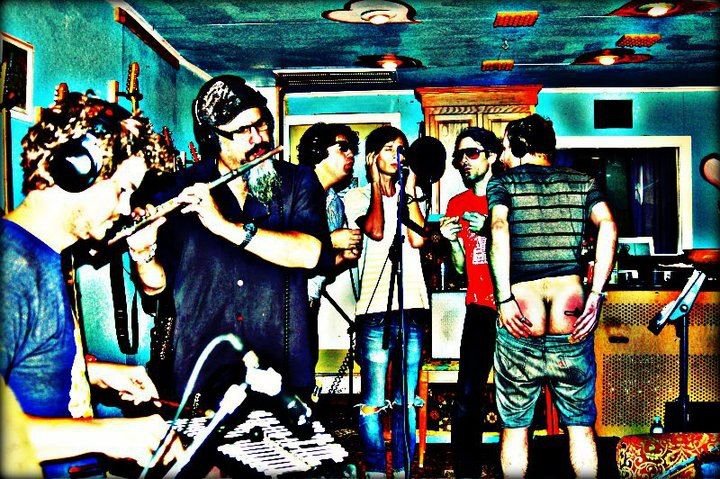 And worth my time it was.  Gabes is the type of venue that makes everything seem a little darker, a little edgier, a little cooler, but neither Diamond Rugs nor the warm up bands needed the help.

The first warm up band was Iowa City’s very own The Sapwoods, who were playing in Mission Creek for the first time.  Self described Indie/Folk/Rock, they set a precedent for the rest of the night.  The band consists of Justin Swafford  on guitar, vocals, and keys, David Suchan on guitar, Nate Subbert on drums, and Brian Speer on bass. Each strum of the guitar was like a taste of energy for the ears. Watch out for The Sapwoods as an up and coming hot commodity in the Iowa City music scene.

Next was New Madrid from Athens, Georgia, who headbanged professionally into my heart. Their vibe was grudge and indie in style and stage presence.  All of the band members had long hair, used tactically to make for more intense headbanging.  At one moment, the lead singer had an Eddie Vedder moment, and hung from the rafters in grudge-rock angst.  The energy was a step up from The Sapwoods which was a fluid crescendo to the main act.  My only complaint was that I couldn’t understand a word of the lyrics.  Although looking back on it, the vocals seemed like they were supposed to be an accompaniment to the sound, rather than the focus of the experience.

The band members of New Madrid were also fun to talk to.  At one point after their show, the drummer came up to my friend and me and attempted to have a casual conversation about “that second warm up band,” pretending he wasn’t part of the band in order to get our honest opinion.  After we told him we liked the band, he looked satisfied with himself.  “I’ll tell you guys a secret,” he said.  “I’m actually in the band.”  He and his band members were light-hearted, likable guys, which makes it that much easier to enjoy their music.

Finally, Diamond Rugs took the stage.  By this time both the crowd and the vivacity had swelled. Diamond Rugs is a “band project” and consists of John McCauley and keyboardist Robbie Crowell of Deer Tick, Ian Saint Pé of The Black Lips, Hardy Morris of Dead Confederate, Steve Berlin of Los Lobos, and Bryan Dufresne of Six Finger Satellite.  There’s age diversity within the group, but they all genuinely looked like they were friends doing what they loved, and having fun.

“We ain’t tryin to reinvent the wheel,” band member Ian Saint Pé said when talking about Diamond Rugs’ music, “maybe just put a new set of rims on it.”  To me those rims were present in Diamond Rugs’ live performance personality.  They were funny, dynamic, rowdy, engaging, and vulgar.  Boredom isn’t an option (or even remotely possible).

At one point while playing guitar, John McCauley managed to grab his beer from the beer holder on his microphone with his mouth, take a swig, and put it back in the holder, all while never taking his hands off the guitar.  Talk about talent. If there’s one thing I know about Diamond Rugs, it’s that your best experience with Diamond Rugs is going to be a live experience.

Misson Creek has snagged some pretty rocking shows over the years.  Diamond Rugs has got to be one of the most fun I’ve ever attended.

Check out this video of Diamond Rugs performing “Gimme A Beer” for a taste of their infectious energy.