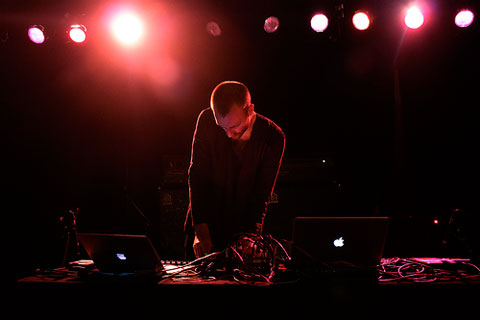 On Tuesday night, Gabe’s played host to a trio of electronic and experimental musicians for the first night of Mission Creek shows. Countless beards were present.

Local musician Brendan Hanks kept the show’s first hour light with a string of bass-heavy, danceable tracks. An initial scattering of neck-bearded, middle aged men quickly diversified as the infectious beats lured in a larger crowd, with Hanks and his laptop pulsating at the center.

Hanks, a 31-year-old sporting neatly-trimmed stubble, has been playing with digital noise for well over five years.

“My music grew out of a failure of trying to start a band,” Hanks said before the show. “I was okay at guitar but I could never find a drummer. I started looking into electronic drums, and I really got into Nine Inch Nails…it kind of spiraled from there.”

He describes the Mission Creek gig as a comeback.

“I used to do stuff as Ex-Action Model. A few years ago I was more active than I am now, but I’ve got some ideas for a release later this year.”

The moderately-bearded Brooklyn musician’s extensive lineup of effects pedals showcased his talent at creating droning, spine-tingling soundscapes, bringing to mind strange creatures and primitive waters when coupled with his stage name. The crowd coasted along on shimmering guitar crescendos and otherworldly, but relatively-peaceful, vibes.

Then Ben Frost and his wild Australian beard took the stage.

Frost’s opening salvo sounded something like an electric guitar being thrown into a herd of angry elephants. The second floor of Gabe’s became a digital cradle, riding shockwaves of destructive bass and clanging scrap metal (metaphors hyperbolic, yet perfectly accurate).

Lighter gasps of electronic noise provided the occasional breath of fresh air, but dark vibrations ruled the night. Animalistic growls burst out unexpectedly toward the end of the set, causing many fans to recoil visibly before regaining position (direct description from my notebook: “audience shredded by tigers. Fused back together like Frankenstein’s monster”).

This show, like all others on Ben Frost’s current tour, was a complete performance of his 2014 album Aurora.

The music may conjure any number of mental images or themes, but after the show, Frost insisted that “there is no correct answer. I don’t want to dictate what people hear.”

“When you put something out, it’s not really yours anymore,” he said. “But that’s the beauty of it. Creating music is a job like anything else, and letting your listeners decide what they’re hearing is a beautiful thing.”

Frost has toured the United States before, but Mission Creek was his first show in Iowa City.

“Your bookstores are incredible,” he said. “You often hear things about certain cities that are greatly exaggerated, but not this city. It’s a very literary place and I’ll definitely be taking some extra cargo home with me.”

One last, unexpected artistic connection surfaced as Frost packed up his gear.

“The highlight of my career is when Eric Wareheim came to one of my shows in LA and we hung out together,” he said. “By far one of the largest influences on my work is the art of Tim and Eric.”

Tim Heidecker and Eric Wareheim are a comedy duo known for their Adult Swim productions and nightmarishly off-kilter video aesthetic. Wareheim, often seen with a shapely beard, has become an acclaimed music video director in recent years, having worked with artists including MGMT, Major Lazer, Charlie XCX, and Beach House.

“Eric told me he’s going to do a video for my next album,” Frost said. And perhaps with tongue slightly in cheek: “It’s a certainty. He has no choice.”

You heard it here first.

Check out Brendan Hanks and Ancient Ocean on Soundcloud. You can grab Ben Frost’s Aurora on iTunes. Here’s “Venter,” the sixth track on the album.

Keep it on KRUI 89.7FM for all of your Mission Creek coverage this week!