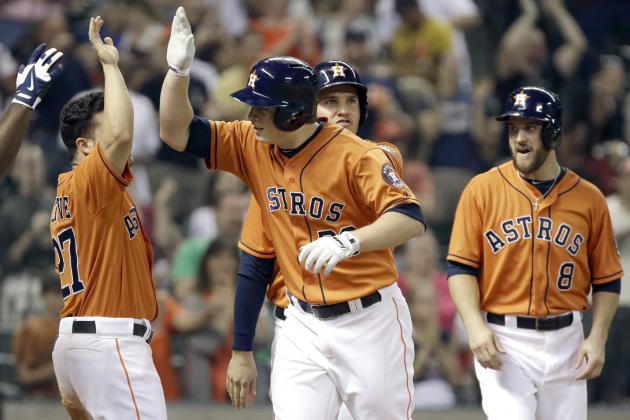 We are half way through March and have only three more divisions to cover. We will cover the AL West for the next five days. Let’s start with the Houston Astros. They still have quite a ways to go but are heading in the right direction. The Astros added a few players this offseason. Let’s take a look at the changed heading into 2015.

The offseason moves weren’t huge but they will certainly have a positive impact on the team. Evan Gattis will start in left field and will bring a power bat to the lineup. Gattis blasted 22 home runs in 2014 and finished with 52 RBI’s. Gattis will struggle defensively but will make up for it with his bat. I love the signing of Luis Valbuena. He adds depth to the lineup and is a solid left-handed bat. He finished with a .249 batting average and 16 home runs in 2014. He will provide consistency over at third. Colby Rasmus is a decent signing. I’ve never been a huge Rasmus fan but I understand the move to replace Dexter Fowler. Rasmus has some pop in his bat but struggles to hit for contact. He finished with 18 home runs and a .225 batting average in 2014.

The pitching rotation is still far from a playoff group. Scott Feldman will lead the staff and try to show the young guys how to compose themselves. The Astros don’t really have any great pitchers. They just need time and experience. The rotation ranked in the bottom half with a 3.82 ERA. The bullpen was horrendous last season, finishing with a 4.80 ERA putting them dead last in all of baseball. The Astros addressed the bullpen issues by snagging Luke Gregerson and Pat Neshek. Gregeron finished 2014 with a 2.12 ERA through 72.1 innings. Neshek was even better, finishing with a 1.87 ERA through 67.1 innings. These two will improve the bullpen dramatically in 2015.

The Astros are hoping that George Springer will be their core. Springer is still just twenty-three and has a huge amount of power. He finished with. . Home runs and. . RBI’s. Springer needs to work on his strikeout rate. He struck out 114 times in just 295 at bats in 2014 and is “boom or bust.” It’s great that he has been able to show a great amount of power at such a young age.  If he can figure out how to make contact more consistently, he will be one of the leagues elite players. Carlos Correa is a popular prospect for the Astros. He is a shortstop who is solid around the table. He has decent speed, a good amount of power, and a quick bat.  Houston fans will be excited to see Correa in action when it’s his turn to shine.

Valbuena has his best season in 2014 when he finished with a .249 batting average and 16 home runs. I think he is ready to take the next step and become a more consistent player at the plate. His left-handed bat is valued by the Astros, and they will be looking for him to make a big contribution. If healthy I expect:

I love everything about Altuve. He is only 5’6″ and still had the highest batting average, .341, in the league last season. He is unbelievably quick and hustles every second. He stole 56 bases in 2014 which led the American League. Altuve does his job better than anyone in the game. He just gets on base as a leadoff hitter. He hit .325 when leading off an inning, once again the highest in the MLB. Altuve makes everyone around him better and if he can come close to repeating his 2014 season, the Astros will win their fair share of games.

The Houston Astros have improved since 2014 but still won’t be in the playoff race due to the greatness of the AL West. They are getting better and will hopefully be contenders in two years. They will still be a fun team to watch with Jose Altuve, Evan Gattis, and George Springer.