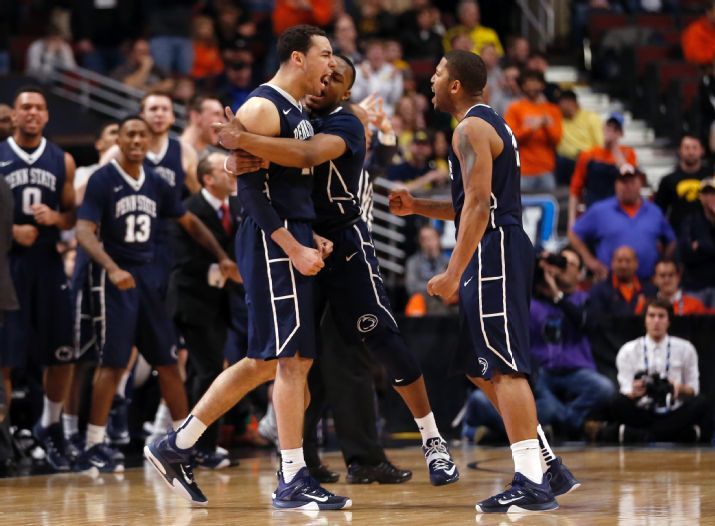 CHICAGO — It was an ugly start, and even uglier finish as the fifth-seeded Iowa Hawkeyes failed to find any sort of consistency and were upset by thirteenth-seeded Penn State 67-58 on Thursday afternoon at the United Center in the second round of the Big Ten Men’s Basketball Tournament.

It was a cold start to the game to say the least for both teams, as Penn State shot just 25 percent from the field (7-of-28) in the opening half, and the Hawkeyes weren’t much better at just 32 percent on 8-of-25 from the floor. It seemed as though Iowa was in control however as they lead by as many as nine late in the half, behind 11 points from first team all-Big Ten selection Aaron White and ten from Jarrod Uthoff. The Hawkeyes also played good defense in forcing six Penn St. turnovers, and holding Nittany Lions leading scorer D.J. Newbill to just seven points, as they took a 27-19 lead into halftime.

The beginning of the second half brought more of the same, as the Hawkeyes (21-11) scored on their first two offensive possessions on a dunk by Uthoff and a three-point play by Mike Gesell to stretch the lead out to 32-21. Then the floor dropped out, as Penn State went on a blistering 15-2 run over the next seven-plus minutes to get back into the game, and took a two point lead on a layup by Geno Thorpe with just over 11 minutes remaining in regulation.

The Hawkeyes remained stagnant after the Nittany Lion run, and the pivotal point in the game came as Adam Woodbury missed a layup with Iowa trailing 42-40, on what appeared to be a missed basket interference call on Penn State’s Brandon Taylor as he ripped the ball down off the rim. Head coach Fran McCaffery was issued his second technical foul in as many games on the ensuing argument and after stepping outside of the coaches box.

Penn State (18-15) would capitalize as D.J. Newbill made the two ensuing free throws, and hit a deep jumper and 3-pointer on the Nittany Lion’s next two possessions to go on a personal 7-0 run and extend the lead to 49-42 with just 7:02 to go.

Iowa however, refused to go quietly as a Uthoff 3-pointer and Gabe Olaseni thunderous putback dunk would bring the Hawkeyes to within four with 4:04 left to go. Both teams would trade free throws back and forth, and the Hawkeyes would have a chance to tie it up trailing 58-56 with 1:42 to go. Jarrod Uthoff got the ball in his hands and a very good look from about 17-feet at the left elbow, but the jumper that he usually makes would fall short and so would the Hawkeyes.

“I can’t believe I missed it,” said Uthoff, who came just shy of a double-double with 17 points and seven rebounds. “I thought it was good. It came out my hand clean, and I liked the fadeaway. A lot of times on my jump shot, it’s normally good. Just missed it.”

Penn State would put the Hawkeyes away for good on a 3-point play on a hard drive to the hoop by senior Ross Travis in route to his 17 points, and Iowa would get no closer as the Nittany Lions would salt it away from the free throw line.

“Yeah, they (the seniors) really stepped up at a critical point in the game to give us a little cushion, D.J.’s little run, and Ross did it throughout the entire game. He played really hard, battling those guys inside. They’re huge, and he was fearless in there.” said Penn St. head coach Pat Chambers. “I’m happy for the players. For January and some of February, we were getting knocked around pretty good in the media, in the social media. I’m really happy for them.”

With the victory, Penn State has now won three Big Ten Games in a five-day span, which is the same number that they had won in all of January and February. They will now look to continue their Cinderella run against the fourth-seeded Purdue Boilermakers tomorrow afternoon, whom they lost a close overtime game to in State College back in January, much like they had to the Hawkeyes two weeks ago before today’s win.

Aaron White led the Hawkeyes with a team-high 21 points and 13 rebounds in his 37 minutes of play, but it was all for not as Iowa shot just 26 percent from the field as a team and were outscored by the Nittany Lions 48-31 in the second half.

The Hawkeyes now will have to regroup quickly, as although they have safely been in the NCAA tournament field for a number of weeks now, the early BIG tournament loss could greatly affect their seeding, and they will learn of their matchup and first weekend destination this Sunday night.