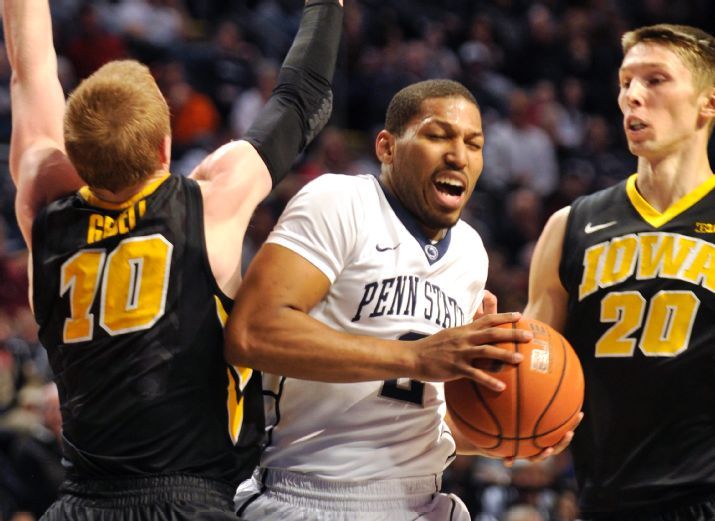 The fifth-seeded Iowa Hawkeyes will take on thirteenth-seeded Penn State in the second round of the Big Ten Men’s basketball tournament on Thursday afternoon at the United Center. This, following the Nittany Lion’s first round 68-65 victory over the twelfth-seeded Nebraska Cornhuskers on Wednesday afternoon, behind 26 points from D.J. Newbill.

The Hawkeyes are considered by many to be the hottest team in the Big Ten entering this week’s conference tournament, after rattling off six wins in a row to end the season, since last losing at Northwestern in overtime 66-61 back on February 15th. Iowa has won four of these last six by double-digits and has shot 44.5 percent from the field and just under 75 percent from the free throw line during this stretch.

The biggest reason for Hawkeyes recent success has of course been the re-emergence of senior forward Aaron White, who is averaging just over 21 points and 9 rebounds a game during the current win streak, and put a bow on his home Hawkeye career with a spectacular 25 point 8 rebound performance on an emotional senior day at Carver-Hawkeye Arena, as the Hawkeyes blew out Northwestern 69-52, and White became the program’s 2nd all-time leading scorer, just behind that of Roy Marble. White was also named as a unanimous first-team all Big Ten selection earlier this week.

Penn State counters White with senior guard D.J. Newbill, who has averaged 20.7 points and 4.8 rebounds per game this season, and has been one of the lone bright spots for the Nittany Lions, who were just 4-14 in the BIG, in this, now head coach Pat Chamber’s fourth season at the helm. They have however, found some late season success as evidenced by their 79-76 victory over Minnesota at the Barn this past Sunday on Newbill’s game winning 3-pointer at the buzzer, before Wednesday’s grind it out win over Nebraska.

Iowa won the team’s only regular season meeting 81-77 in overtime in State College back on February 28th. Aaron White scored a team-high 21 points and stole a D.J. Newbill inbounds pass with 30 seconds left in OT, which allowed the Hawkeyes to salt the game away from the free-throw line. Four Hawkeyes total scored in double figures, including Josh Oglesby, who had 12 points on 4-of-8 from three-point range. Iowa was also 25-27 from the charity stripe.

Aside from Newbill, the key for the Hawkeyes will be continuing their stellar defensive play, in which they are forcing 12.6 opponent TO/game on the season, and forced the Nittany Lions into 15 in the victory two weeks ago. They must also stop the duo of Shep Garner and Geno Thorpe, who are averaging 9.1 and 8.8 PPG respectivly this season, and combined for 31 points in the loss to the Hawkeyes.

The winner of Thursday’s contest gets fourth-seeded Purdue in Friday’s quarterfinals. Both teams are winless in their one and only meeting with the Boilermakers earlier this season.