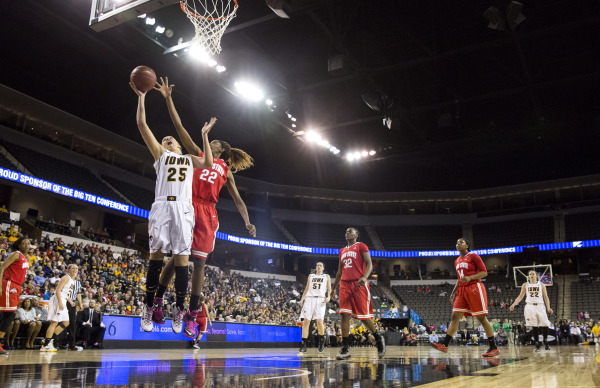 HOFFMAN ESTATES, Ill.– Bethany Doolittle hit a layup with two seconds left in regualtion to tie the Hawkeyes and Buckeyes at 81 a piece and send the game to overtime, but co-Big Ten player of the year Kelsey Mitchell hit two three-pointers in the final 1:22 of overtime to send third-seeded Ohio State to a hard-fought 91-85 OT victory over second-seeded Iowa in the semifinals of the Big Ten women’s basketball tournament Saturday night at the Sears Centre.

Dixon continued her hot shooting in the second half, draining three more three-pointers in route to a team-high 22 points. Junior Kali Peschel also followed up her 13 point performance in the previous night’s win over Nebraska, with 12 more tonight, once again shooting 3-of-5 from long-range. The Hawkeyes used this hot shooting to build a 72-65 lead with just under seven minutes remaining and it looked as though the Hawkeyes had taken control. The Buckeyes however turned up the heat defenseively and used an 8-0 run to get back into the game, and a layup by Alexa Hart gave the Buckeyes a 74-73 lead.

“Coach McGuff said do what you gotta do, but don’t let Dixon catch it and don’t let Doolittle get in the paint.” said the Buckeyes Kelsey Mitchell on getting back into the game in the second half. “It was just the act of us coming together, and saying we needed to buckle down on defense to win the game.” “So we tried our hardest and I guess it worked.”

Both teams traded baskets in the final four minutes and the Hawkeyes played the foul game on the Buckeyes Alexa Hart, who is just a 44 percent free throw shooter. The gamble paid off as Hart hit just one of her four free throws down the stretch and kept the Hawkeyes within striking distance. Disterhoft had a chance to give Iowa the lead from the free throw line trailing 80-79 with 17 seconds to go, but missed both attempts. That would set the stage for Doolittle to play hero, as she tied it up off an inbounds play under the basket after a timeout by head coach Lisa Bluder with just 3.4 seconds remaining.

I asked coach Bluder what she was thinking while drawing up the final play that sent the game into overtime and gave the Hawkeyes new life.

“We had two possibilities, one was for a three and one was for Beth on that roll-back.” “And it depended on how they were going to set up what one we were going to do.” said coach Bluder.”We took the roll-back and had that good high-percentage shot, which put us into overtime.”

She also talked about the difficulty of playing without senior point guard Samantha Logic in overtime, as Logic fouled out with 17 seconds left in regulation.

“Without Sam, you know, she’s a person that plays every single minute for us, and to not have her for those last five minutes, that was really huge.”

Four Hawkeyes total scored in double figures, including Logic who would record yet another double-double with 12 points and 10 assists on 5-of-10 from the floor. Bethany Doolittle also added a total of 21 points in 35 minutes of play.

The Hawkeyes still had life in the overtime period, as Whitney Jennings made a pair of free throws with 42 seconds remaining to draw Iowa to within one point at 86-85. However, Mitchell then nailed a clutch 3-pointer on the very next possession with just 14 seconds left to seal it for the Buckeyes. Two final free throws would give the super freshman a game-high 29 points, and the Buckeyes and trip to the championship game.

The win puts the Buckeyes (23-9) into the BIG championship game against the top-seeded Maryland Terrapins, who are still undefeated in conference play in just their first season in the Big Ten conference.

The Hawkeyes (24-7) will now move onto the NCAA tournament where they are likely to be either a three or four-seed, meaning that they will play their first two rounds at the friendly confines of Carver-Hawkeye Arena, where Iowa is a perfect 16-0 at home this season.

“I’m confident that we will be a top four seed in the country, which means we would get to host,” said coach Bluder. “Our fans have been marvelous and I know they will come out to Carver-Hawkeye Arena for those NCAA Tournament games. I believe this team can do something really special this year.”