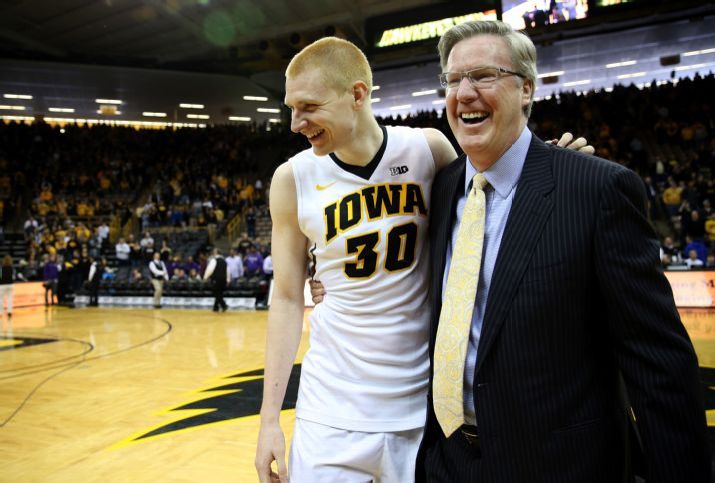 The Iowa Hawkeyes (21-10, 12-6) took care of business in front of a capacity crowd with a 69-52 final tally over visiting Northwestern to extend its Big Ten win streak to six.

The Wildcats (15-16, 6-12) were overwhelmed by a flurry of high-energy plays by the Hawkeyes. Aaron White finished with 25 points, including five alley-oop jams, and eight boards, in his final game at Carver-Hawkeye Arena that went just as scripted.

White, alongside fellow seniors Gabriel Olaseni, Josh Oglesby and Kyle Denning hugged at center court after a Fran McCaffery timeout with just under 30 seconds remaining. They were then greeted individually by each underclassman, before embracing their energetic head coach, all before 15,400 fans on their feet in approval.

“It was emotional walking off for the last time, hugging coach – who has meant so much to me,” White said. “It got to me. It was special, amazing. It was truly amazing.”

White scored the first eight points for the Hawkeyes, and has been playing the best basketball of his career at the most ideal time, averaging 24 points, nine rebounds and shooting 55 percent from long range over the past four games. According to McCaffery, despite skyrocketing numbers, nothing has changed about his demeanor.

“Let me say this,” McCaffery stated after denying a shift in White’s mindset. “Maybe the worst game of his career was when we played Northwestern last time. I think that determination, ‘I’m not going to play like that again.’”

Iowa led from opening tip to final horn, starting the game on a 17-7 run. Beyond Northwestern cutting the deficit to just two momentarily deep into the first half, the pressure never seemed to be on. Iowa doubled a six-point halftime lead within three minutes following the break.

Jarrod Uthoff and Adam Woodbury were the other two double-digit scorers for Iowa, finishing with 16 and 13 respectively. Uthoff filled the stat sheet by adding eight rebounds to complement three steals and a pair of blocks, but Iowa’s offensive rebounding as a team stole the show.

“They’re playing as good as anybody in our conference right now, and that’s a credit to the leadership of their coaching staff and also their older players, and the way they’ve led that team,” Collins said, “You can tell they’ve turned it up a notch and they’re ready to make a run.”

The late stretch run by Iowa is the polar opposite of a year ago. The Hawkeyes carry a six game winning streak into the Big Ten Tournament, and still have an opportunity to earn the coveted double bye with a loss by either Purdue or Wisconsin.

Iowa lost seven of its final eight games in 2013-14, including an upset by Northwestern in the Big Ten Tournament, and a play-in game exit in the NCAA Tournament. Following consecutive conference losses to Minnesota and Northwestern this season, the Hawks wanted to ensure that didn’t happen again.

“We don’t want what happened last year to happen again,” junior Mike Gesell said. “We really got together and talked to make sure it doesn’t.”

Seniors Oglesby and Olaseni struggled offensively, but it still made for a meaningful night.

“It was a nice touch.” Olaseni said in reference to getting his first career start on senior night. “Coach didn’t have to do that.”

Olaseni’s family, from Britain, were in attendance to see him play his final home game as a Hawkeye, but weren’t there to see his reaction when McCaffery initially gave him the news.

“When I told the guys in practice that I was going to do this,” McCaffery said. “The first thing Gave did was go give Woody a hug. That’s something special about our team.”

The Hawkeyes await the conclusion of the Big Ten regular season to decide their conference postseason fate, but can do no worse than a five seed. When the senior class first arrived, Iowa was far from such fortune. In the three seasons prior to this class playing its first game, the Hawkeyes had won a total of 13 conference games – just one more than this season alone.

“[Oglesby] wanted to be a part of the resurgence. Whitey just wanted a chance to play. He believed in himself. Josh believed in himself,” McCaffery said. “Doesn’t matter what happened before I got here. We’re going to change that. We’re going to have the confidence and belief in ourselves. Gabe is the same way. Now you have guys that say ‘together we can get this thing done.’ I think that’s the greatest feeling as a coach.”

The Hawkeyes, in their final curtain call, certainly have changed the feeling in Carver-Hawkeye Arena.

Game notes: Iowa honored all four seniors before the game with a framed jersey and standing ovations. Roy Marble Sr., Iowa’s leading scorer who is suffering from stage four cancer, was honored at halftime. His jersey was not retired. With a Purdue or Ohio State loss, Iowa will be the four seed and receive a double-bye in the Big Ten Tournament. The six game Big Ten win streak is the first for Iowa since the 1986-87 season. Fran McCaffery picked up his first technical foul of the season after a foul was called on Mike Gesell.