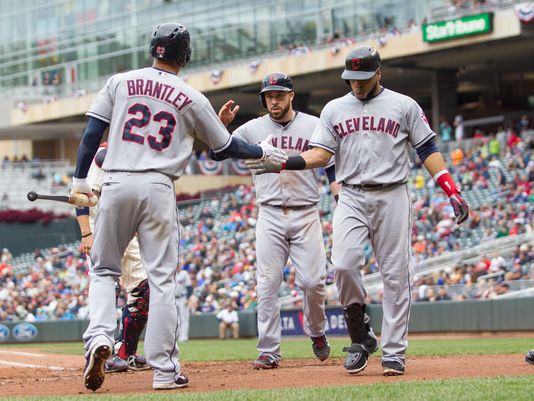 The Cleveland Indians are finally ready to compete in the AL Central.  They found a true Ace in Corey Kluber and have the depth to go a long way. The Indians made a few moves this offseason to help their cause in 2015. Let’s take a look at the minor changes.

You have to like the fact that Clevland didn’t really lose any big names from last season. The Indians will be bringing back the starting players. This team already had strong team chemistry and will be looking for that chemistry to translate into wins. The addition of Brandon Moss brings another left handed power bat to the line up. Moss finished with 25 home runs and 81 RBI’s in 2014.

The Indians pitching staff is lead by Cy Young award winner Corey Kluber. He finished 2014 with a 2.44 ERA through 235.2 innings of work. Kluber struck out 269 batters in 2014 while walking only 51. Cleveland will be looking for Danny Salazar and Trevor Bauer to improve in 2015. Both pitchers have the ability to strike out batters at a high rate. Salazar only pitched in 110 innings in 2014 and finished with a 4.25 ERA. He had a 9.8 SO9 rate. Trevor Bauer pitched his first full season in 2014. He finished with a 4.18 ERA through 153 innings. Bauer held an 8.4 SO9 rate. Both pitchers have time to develop. Salazar is twenty-five years old while Bauer is just twenty-four. The Indians expect these two to be key pieces in the future rotation.

The offense should be there for Cleveland in 2015. Michael Brantley was one of the best left fielders in the game last season. He finished with a .327 batting average and 20 home runs. He also drove in 97 runs and held a .506 slugging percentage. Yan Gomes brings a solid bat from the catcher position. Gomes knocked in 74 runs and belted 21 home runs in 2014. He finished with a .278 batting average to go along with his .472 slugging percentage. Gomes should continue to improve with more at bats.The Indians know that they possess one of the top catchers in the game in Gomes.

Jason Kipnis and Carlos Santana will be looking to rebound in 2015. Kipnis watched his batting average dip 44 points lower than in it was in 2013. He also hit 11 less home runs. He missed a small fraction of time due to injury but still played in 129 games. He will be looking to push his batting average near .300 this season. Carlos Santana never found his swing in 2014. He managed to hit just .231 with 124 strike outs. Although the contact wasn’t there, Santana still found ways to contribute. He hit 27 home runs and led the league with 113 walks. He could be the difference make if he finds a way to hit for average.

Salazar could be one of the more dominant pitchers in the game if he stays healthy. Salazar has the ability to finish batters off and has improved his control. He’ll look to improve his pace of work. The Indians would be pleased if Salazar is able to work deep into games. We know he has the stuff, it’s just a matter of when and if he can tie it all together. I think Salazar is ready to become the dominant pitcher that he truly is. If healthy I expect:

Carrasco burst into the Cleveland’s rotation in 2014 finishing with a 2.55 ERA over 134 innings of work. If Corrasco can deliver in the way he did in 2014, the starting rotation could be one of the best rotations in the American League. It would take the pressure off of Salazar and Bauer. The Cleveland offense if finally finding its identity and would be given a nice boost if the starting rotation could take off some of the pressure.

The Indians will be strong contenders in 2015. They have an offense that can manufacture runs and a starting rotation that will continue to improve over time. They didn’t lose any starters from 2014 and added the power bat of Brandon Moss. Expect this team to pick up right where they left off.