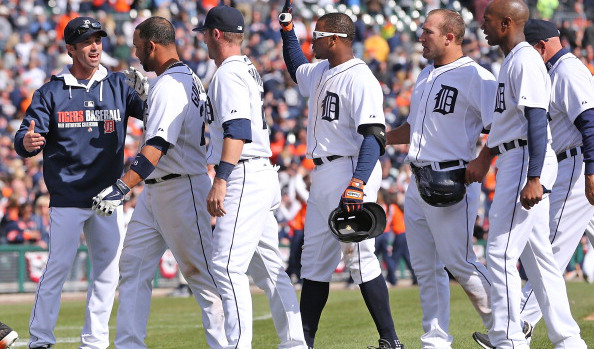 It seems like everyone has had the Detroit Tigers as a favorite to win the the world series the past few seasons. Why would that change this year?  It really hasn’t. Detroit is ranked 9th headed into this season with 16/1 odds. There are a few major changes in Detroit this season. Let’s take a look at some of the notable moves.

It doesn’t take a genius to figure out that the loss of Max Scherzer is huge. Scherzer has been the ace of Detroit’s staff for the past two seasons. He was the AL Cy Young award winner in 2013 when he finished with a 2.90 ERA through 214.1 innings of work. Scherzer was was excellent in 2014 finishing with a 3.15 ERA over 220.1 innings. The Tigers might struggle without Scherzer’s consistency and durability. Anytime you lose a pitcher who gives you 200+ innings a year hurts dramatically. Detroit is fortunate to still have David Price, Justin Verlander and Anibal Sanchez to lead the rotation. The starting rotation should still be solid but the bullpen is a concern.

Detroit’s bullpen ranked in the bottom five among bullpens in the MLB last season. The relievers collectively posted a 4.29 ERA and allowed opposing batters to hit for a .270 batting average last season. They have done little to address the bullpen problem and it will show. It doesn’t matter if the starting rotation is solid if the bullpen can’t close games.

The Tigers will be expecting major contributions from Yoenis Cespedes. He has an explosive bat and will be looking to improve his contact. Cespedes has hit a combined 71 home runs throughout his first three seasons in the bigs. Even though power is one of his strengths, his arm makes him superhero like. The left fielder has an absolute cannon and is not afraid to let it fly.

The offense should be solid in 2015. It will be lead by Miguel Cabrera, Victor Martinez and Yoenis Cespedes. Martinez is coming off a spectacular season in which he finished with a .335 batting average, a .409 OBP, a .974 OPS and hit 32 home runs. Miguel Cabrera should continue to be one of the elite hitters in the game. Cabrera has a .320 career batting average and a .564 slugging percentage. Ian Kinsler is one of the key pieces of the offense. He brings consistency and durability to the lineup. Kinsler played in 161 games last season. Newly acquired Anthony Gose will be a player to keep your eye on. He struggles to swing the bat but has showed incredible defensive abilities. He will be looking to flash his leather for Detroit fans in 2015.

Castellanos will be entering his second full season in majors. He slashed a .259 batting average and a .394 slugging percentage in 2014. The youngster has a long way to go but could be a big contributor for years to come. He struck out quite a few times as a rookie. He’ll look to add some power this season and reduce his strike out rate. That’s not always an easy thing to do but he’ll be surrounded by some of the best players in the game to help him out. If healthy I expect:

Game Changer: Anyone in the bullpen

The bullpen was flat out awful in 2014. They need someone to step up and close out games. It’s hard to say who that will be at this point. Joe Nathan is already forty years old and finished with a 4.81 ERA last season. Bruce Rondon could step up in a huge way. He’s only twenty-four years old and brings a live arm to the bullpen. Rondon is also a top candidate for breakout player in 2015. The Tigers are praying for someone to step up and pick up the slack in the bullpen.

The Tigers will be contenders in 2015. They need to make their run now due to the fact that their core is getting older and there is a good chance that they will lose David Price to free agency after the 2015 season. They have the offense and the starting rotation but the bullpen is still a question mark. Expect them to be compete for the title in the AL Central.