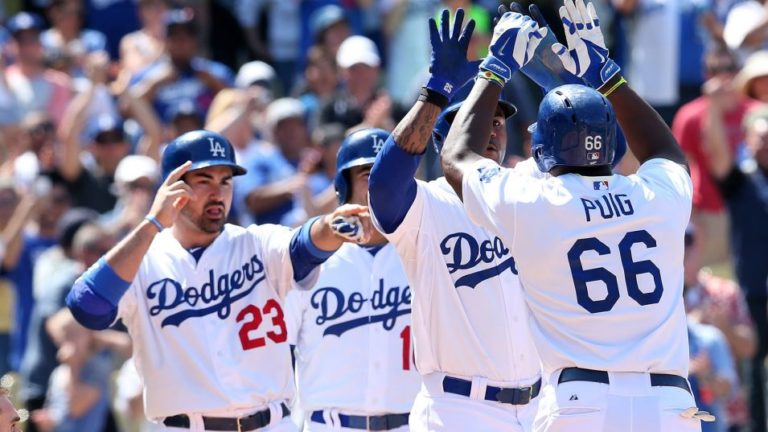 The Los Angeles Dodgers are ready to take the NL West by storm and make a deep playoff run.. unless they meet the Cardinals. The Dodgers have been stumped the past two postseasons by St. Louis. Dodger fans can only hope that the third time will be the charm. The Dodgers added veteran presence this offseason. Lets take a look at the key changes:

I absolutely love what the Dodgers did this offseason. They’ll probably miss the power bat of Hanley Ramirez but they definitely won’t miss his defense. I almost didn’t put SS by Ramirez’s name up top because it’s just sad to consider him a shortstop. The loss of Kemp will hurt Joc Pederson doesn’t pan out. The Dodgers added veteran leadership that should help out in the clubhouse.

Nobody should be worried about the starting rotation led by Clayton Kershaw. If you’ve been living under a rock, Kershaw was awarded the NL Cy Young award and NL MVP in 2014. Zack Greinke is one of the best number two pitchers in the game. He has finished each of the last two seasons with 15+ wins and an ERA under 2.72. Greinke would be the ace on quite a few teams right now. Hyun-jin Ryu comfortably holds the third spot in the rotation. Ryu currently holds a 3.17 ERA through 344 innings of work in his time with the Dodgers. McCarthy and Anderson are solid four and five guys. My favorite move was the signing of Brandon Beachy. Beachy missed all of 2014 with an arm injury and has been injured throughout the past few seasons. This signing was a low risk, high reward. If Beachy is unable to return to form, the team won’t be hurt by the loss. If Beachy does return to form, it could be an absolute nightmare for opponents. Beachy has a 3.23 career ERA and averages 9.2 strikeouts per 9 innings.

The Dodgers found a new middle infield with the additions of Jimmy Rollins and Howie Kendrick. Rollins is a major defense upgrade at short and brings veteran leadership that might help this team gel. Kendrick has a career batting average of .292 and brings consistency to the lineup. Dodger fans can count on Kendrick performing at a high level every day.

The loss of Matt Kemp means that prospect Joc Pederson will see action in 2015. Perderson has collected a .302 batting average and a .524 slugging percentage during his time in the minors. He has the ability steal bases and can hit for power. He should strikeout at a high rate but the Dodgers will hope to change that over time. It’s a good environment for any rookie to play in. The Dodgers have an unbelievable amount of talent to go along with veterans who will help Pederson adjust. Even if Joc struggles, the Dodgers have more than enough fire power to make up for it.

Joc Pederson is the obvious breakout player to watch in 2015 and the rest of this team is made of super stars. Yasmani Grandal will have the opportunity to hit in a new ballpark with talent to back him up in the lineup. He finished last season with 15 home runs but struggled to hit for average. He should have more opportunities to drive in runs and will be looking to take advantage of them. If healthy I expect:

If the Dodgers have a weak spot it’s the bullpen. They haven’t been awful but they have struggled to find consistency. Jansen’s stuff is just plain filthy. He finished with a 2.76 ERA and 44 saves in 2014. Everyone knows that the offense and starting pitching will be there. If Jansen can stay healthy and close out games, the Dodgers would almost be guaranteed a playoff spot.

The Dodgers own the NL West. They have overflowing talent and are poised to make another playoff run in 2015. Expect them to run away with the division.