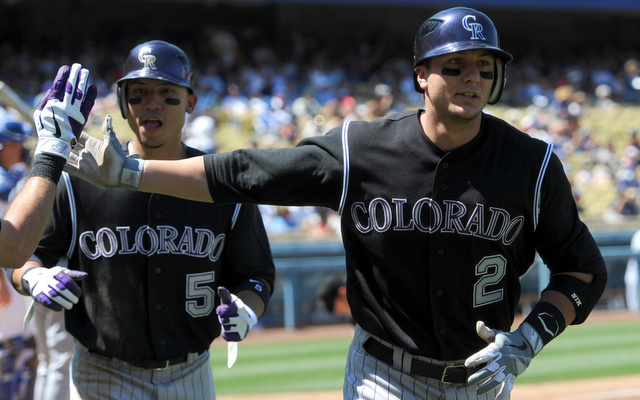 Second on our list are the Colorado Rockies who finished 2014 with a 66-96 record. They enter 2015 with minor changes.

The Colorado Rockies are one the most frustrating teams to talk about in all of baseball. They have incredible hitting talent led by Troy Tulowitzki and Carlos Gonzalez. They had more talented bats than they knew what to do with last season. They undoubtedly bring potential except for one key spot… pitching.

The Rockies starting rotation was the worst in baseball last season finishing with a 4.84 ERA collectively. Their starters managed to produce only 70 quality starts throughout the season. Only the Chicago White Sox issued more walks than the Rockies in 2014. The Rockies staff also finished second to last in the strikeouts category. Do you see where this is going? The Rockies pitching rotation is among the worst no matter what category you are looking at.

This staff is led by Jorge De La Rosa who finished the 2014 season with a 4.10 ERA over 184.1 innings of work. Next is Jhoulys Chacin who posted a 5.40 ERA over 63.1 innings. Do I dare continue? Kyle Kendrick is a new face in the rotation who hasn’t been very effective over the past few seasons. He finished with a 4.61 ERA in 199 innings of work for the Phillies last season.  The fourth spot in the rotations should go to Jordan Lyles who has a career ERA of 5.09 through his first four seasons. The final spot in the rotation goes to Tyler Matzek. The 2014 rookie showed signs of promise as he ended his first campaign with a 4.05 ERA. The rotation might improve slightly in 2015 solely because it’s hard to finish worse than they did in 2014.

Troy Tulowitzki is arguably the best player in baseball when healthy. Tulo was having the best year of his career in 2014 before his season was ended prematurely due to injury. Through 315 at bats, Tulo owned a .340 batting average, 21 home runs, a .603 slugging percentage and 52 RBI’s. Tulowitzki has struggled to stay on the field throughout his entire career. He has played in 150+ games only twice in his career. He will likely be involved in MVP conversations if he can figure out how to stay on the field in 2015.

The Rockies outfield is one of the most exciting trios to watch when playing at Coors Field. Why do I limit the excitement to just Coors Field? Take a look at these splits for the three starting outfielders in 2014.

This trend can be seen with just about every player on the Rockies.

Matzek was the one bright spot in the 2014 starting rotation. At the age of 24, he has room to develop and he held his own last year at Coors. He posted a 3.61 ERA while pitching at home last season. He has the ability to produce a quality amount of strikeouts and he does an excellent job keeping lefties off balance. Left-handed hitters were limited to a .147 batting average against Matzek last season. Matzek should continue to improve and will have to be consistent on the road for the Rockies to have just a sliver of hope for October baseball. If healthy I’m expecting:

De La Rosa certainly has the stuff to be effective. In 2013 he finished with a 3.49 ERA through 167.2 innings. He’s not the typical ace but he has the ability to do just enough to keep his team in the game. If he can repeat what he did in 2013 or 2011, the Rockies will instantly be an improved team. We often see that both good and bad pitching is contagious. Just take a look at the 2014 Royals and Tigers. The Tigers bullpen was collectively awful whereas the Royals bullpen all performed at an exceptional level.

One player to keep an eye on is Nolan Arenado. The youngster will remain an exciting player to watch at third base. He’s not afraid to flash his leather and he found a bit of power in 2014. He finished the season with a .287 batting average and a .500 slugging percentage. Look for him to improve his offensive skills in 2015.

It’s pretty safe to say that the Rockies won’t be a major threat in the NL West in 2015. They will bring a strong offensive lineup into each game but will often fall short due to the inability of preventing the other team to score. Rockies fans can only hope that Troy Tulowitzki can stay healthy for the bulk of the season.

Make sure to check back in on March 31st for my complete standing predictions along with a few other fun pieces of news. Until then, you will be able to find a new preview of an individual team from March 1st through the 30th here at KRUI.FM