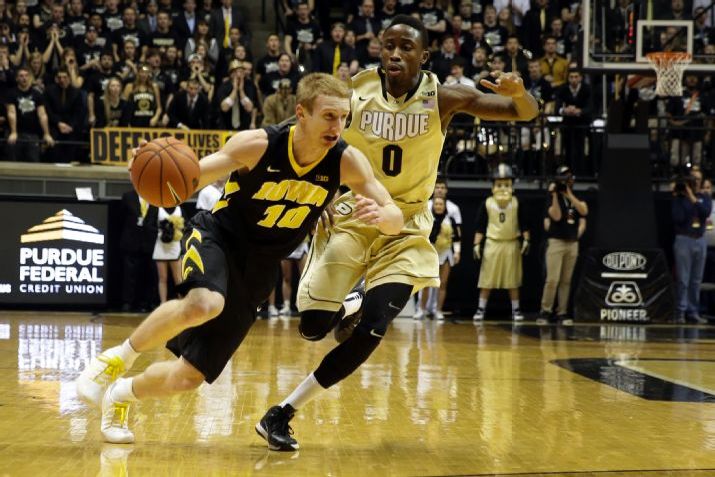 IOWA CITY, Iowa – After dropping its third straight game in the Big Ten, the Iowa Hawkeyes (13-8, 4-4) find themselves included in the premature bubble talk surrounding the fan base and various media outlets.

Iowa had a decent at best non-conference performance, coming out of Chapel Hill with a victory over the ranked Tar Heels, but falling to in-state foes Iowa State and Northern Iowa along with missed opportunities against Texas and Syracuse in New York City.

The Hawkeyes started Big Ten play with a bang, winning four of five including an early sweep over Ohio State. The NCAA Tournament was looking like a lock for the Hawkeyes, barring a collapse down the stretch.

Iowa then entered the toughest stretch of conference play with some confidence and their eyes set on the top of the Big Ten leaderboard.  With two games against conference leading Wisconsin and a “trap” game in West Lafayette, many Hawkeyese fans expected to play the Badgers tough in Madison, beat the Boilermakers, and possibly steal the next one at home against the league leaders.

Instead, Iowa dropped all three, and didn’t look good doing so.  Controversy surrounded the team after ESPN announcer Dan Dakich called Adam Woodbury out on national television in a 30-point thrashing by Wisconsin. His comments did not sit well within the fan base or Fran McCaffery.

Trying to forget the drama and redeem themselves with a win over Purdue, Iowa was plagued with an injury to Aaron White who watched Iowa fall to the Boilermakers from the bench. Saturday’s rematch with Wisconsin was a great chance to erase the previous two games from their heads, but instead Iowa trailed most of the game and couldn’t protect home court.

Falling to 4-4 and sliding down in the standings nearing the halfway point in conference play, the Hawkeyes find themselves with some work to do. The schedule doesn’t get any easier this week with a trip to an improving Michigan team on Thursday followed by hosting #17 Maryland on Sunday. The Hawks need at least one of these…bad.

The quick start in Big Ten play raised the hopes of a starving fan base that have been left with a sour taste following the early exit in last year’s NCAA Tournament and a football season to forget.

By all means, the Hawkeyes have a pretty good chance of snagging an at-large bid come March, but as of now, the committee most certainly has Fran McCaffery’s team “under consideration”.  ESPN has Iowa in the top 50 RPI rankings with Kenpom, Sagarin, and other computer rankings also listing the Hawkeyes as a top-50 team in the country.

A 6-4 finish to the season and a win in the Big Ten Tournament should get Iowa an at-large bid, but unfortunately for Iowa, the committee doesn’t give my opinion much of a look.

Iowa needs to get healthy, put these last couple of games behind them, and get back to playing their game. A win at Michigan would do wonders for the team and lucky for them, they find themselves with another shot at a ranked opponent on Sunday.  There is a ton of basketball left to be played, but if the Hawkeyes don’t want another nerve-wracking Selection Sunday, there is work to do.