In a night full of upsets the Iowa Wrestling team took three out of the four matches of the night against Northwestern where both opponents were ranked while winning 38-3 overall. Among those four matches, two were set to go Iowa’s way according to the rankings and the other two matches were predicted to be won by the Wildcats.

As a whole the Northwestern wrestling team only has those four ranked wrestlers while the Hawkeyes have a ranked wrestler at every weight class and a wrestler ranked in the top ten in all but one weight class (#17 Michael Kelly being the exception). So according to rankings Iowa was predicted to win all but two matches, but at the end of the meet the Hawks walked away winning every match they were supposed to except one but picked up the two they were not supposed to win.

Starting off the night was the 125 lb sophomore Thomas Gilman who was consistant as ever. He set the tone of the meet by going up 17-5 by the end of the first period. Needless to say it was not long into the second period when he put Northwestern’s Garrison White away for good.

Next at 133 Cory Clark sent a message of his own to the wildcats when he pinned his opponent, Dominick Malone, in the first period. Dziewa kept the ball rolling for the Hawks with a 5-0 decision over Jameson Oster, but it was Brandon Sorensen that really ignited Carver-Hawkeye this evening.

Just to get one thing clear, Brandon Sorensen is on fire. He has now won his last seven straight matches with four being against ranked opponents. Tonight he really kept that streak alive with a win against the number one ranked wrestler in the nation at 149, Jason Tsirtsis, whose streak had reached all the way up to fourty straight wins until he met Sorensen for the first time tonight in Carver-Hawkeye Arena.

The match was a contest between two incredibly disciplined individuals and it turned into a match of attrition as the competition extended all the way into the seventh period. The first scoring of the match came in the second period when Tsirtsis escaped and then again in the third when Sorensen answered with an escape of his own. Then during the tie breaker in the first overtime the same was the case when Tsirtsis escaped and then was answered by Sorensen’s own escape during his choice. It was not until after another scoreless overtime and in the 2nd tie breaker that Sorensen escaped first and then managed to keep Tsirtsis down during his choice for the win.

Yet another big match came at 165 where Iowa Senior, #9 Nick Moore, defeated Northwestern’s #6 Pierce Harger. This was another heated battle that drew itself out all the way until overtime just like the match at 149; only in this one Moore struck with a high crotch to win it in the only the first overtime.

The next ranked matchup was at 197 where Iowa’s #4 Nathan Burak took on the Wildcat’s #13 Alex Polizzi. Burak shot early and often bet kept being foiled by a mat-evading Polizzi. After looking so dominant for the majority of the first period Burak faltered, giving up a takedown to Polizzi but managed to escape before the end of the period. When Polizzi escaped in the second period after choosing down Burak answered with an escape of his own in the third but still remained down by one point. Finally with mere seconds left Burak finished on a deep high crotch consummating the win.

The final match of the night was between the Hawk’s #1 Bobby Telford and #4 Mike McMullan of Northwestern. This was their seventh time meeting with a career record between the two tied at 3-3. The match was another low scorer that ended up going into overtime tied at 1-1. It was not until a nailbiting second overtime when Telford was about to finish on a match winning shot that McMullan scrambled his way to a takedown and a victory. 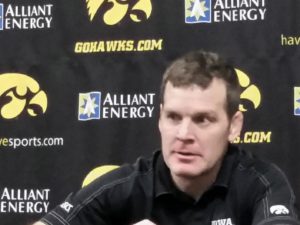 After the meet head coach Tom Brands said that he thought that the score was indicative of the way that his team wrestled. He continued, “There were probably some mismatches in the rankings there, but you’re supposed to roll like that” speaking about the lopsided team rankings (Hawekeys are currently the top ranked team whereas the Wildcats are only #24). When asked about Telford’s loss Brands simply said, “We’ve got a guy upstairs (Telford) that’s not taking it well. He shouldn’t; I’m not taking it well either, but that’s a lesson.”