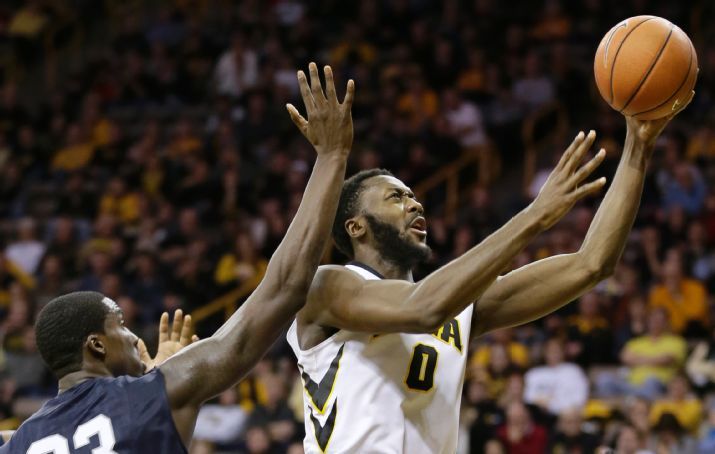 IOWA CITY – The Hawkeyes seemingly just needed something positive to go their way following two consecutive losses to in-state foes Iowa State and UNI. They got that on Monday night with an 80-70 hard-fought win over North Florida.

There was a rare change to Iowa’s starting lineup as sophomore Peter Jok got the nod at shooting guard over the injured Anthony Clemmons, who did play six minutes off the bench before spraining his other ankle and leaving the game for good. Jok made the most of his start, scoring 12 points on two of four from 3-point range in 22 minutes of play.

Aaron White led the way for the Hawkeyes with a game-high 23 points, and also added nine rebounds and five steals.”His energy level I really thought was what was the difference in the game. He was all over the glass, he was all over the floor” said Iowa head coach Fran McCaffery.

Josh Ogelsby also played a big role for the Hawkeyes, shaking off a disappointing start to his season by draining his first three 3-pointers off the bench, in route to a nine point and three rebound performance.

North Florida proved to be a tough challenge for the Hawkeyes, as although the Ospreys got down 13 at halftime, battled back time and again in the second half and cut the Hawkeye lead to five with just over eight minutes left in regulation.

“This is a tremendously talented team, incredibly well coached team. I really think they can win that league.” said coach McCaffery of the Ospreys.”They don’t go away. They just keep coming. They’ve got shot makers, they’ve got drivers, post players, a good player that didn’t play. So they’re going to be really good.”

The Ospreys were led by junior guard Trent Mackey, who made six of seven from deep in the first half in route to a career-high 18 points. Mackey also has Iowa ties, as his father Jon went to Iowa, and he himself had attended numerous Hawkeye basketball camps as a kid growing up.

“Your guys, they get down when they miss a shot. Coach doesn’t get on them, coach doesn’t sub them, Coach doesn’t do anything. Your guys have to get a little bit thicker skin and understand I’m going to miss some shots but I can’t let it affect the next one.” said Driscoll.

The difference in the game proved to be from the free throw line, as the Hawkeyes made 26 of their 28 attempts, compared to the Ospreys, who shot just seven total free throws.

The Hawkeyes (9-4) will now take some much needed time off for the holidays, before returning practice on the 26th in order to get ready for the start of Big Ten play at Ohio State on December 30th.